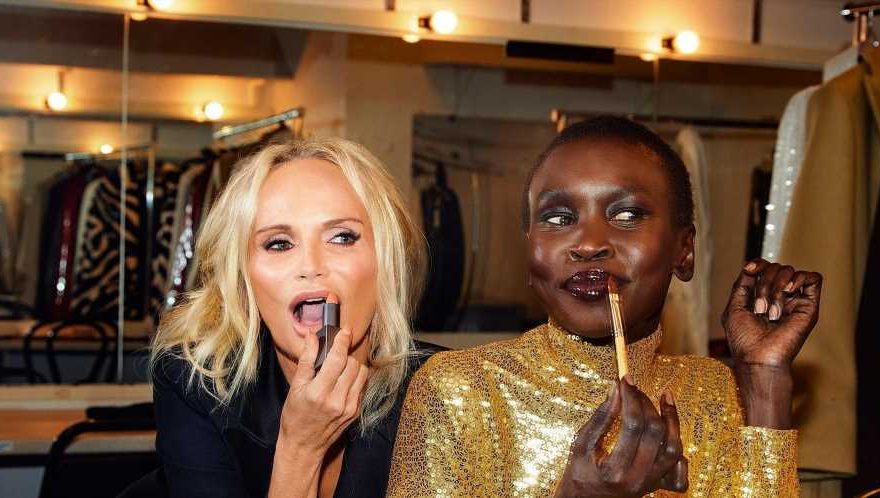 It was this past April, during the height of the pandemic, when the lights finally shined on Broadway for the first time in over a year. And who could make the city feel alive again, if only for a New York minute? The man whose name beamed from the marquee of the Shubert Theatre: Michael Kors.

To mark his 40th anniversary in the industry, the designer and longtime theater advocate took over a stretch of 45th Street and sent a parade of classically glamorous looks — 63 in total — down the makeshift Midtown runway. He cast models who are longtime friends and collaborators, such as Shalom Harlow, Helena Christensen, and Naomi Campbell, as well as fresh new faces who were nervous about navigating potholes in their first official trot out. ("I just told them to walk around them," jokes Alek Wek, who is also featured in this shoot. "If they covered them up, it wouldn't have been authentic.")

The audience-free affair, which followed COVID-safe protocols, was made into a short film accompanied by a crooning Rufus Wainwright soundtrack that was then blasted over social media, receiving enough likes to constitute a virtual standing ovation. Would he have preferred a big, in-person shebang at Sardi's? Perhaps. "It would have been a fun party," says Kors months later at the New World Stages, a stone's throw from the beloved Broadway restaurant. "But I had never done anything on the street in New York, and, well, the streets were empty. That was a silver lining." If there's one thing that Kors is particularly adept at, especially after all these years navigating the push and pull of the fashion industry, it's his uncanny ability to home in on optimism. After all, it's his youthful idealism that got him started in the first place. His well-documented path is now fashion folklore: A precocious Fashion Institute of Technology dropout turned newbie designer from Merrick, N.Y., just happens to catch the eye of an esteemed fashion director (Dawn Mello) in 1981 as she passes by a department store window where Kors is hanging his wares. She then invites him to develop his own line for Bergdorf Goodman at the age of 22, and off to the races he goes. "That was a great way to start," admits Kors before rattling off a few more career highlights: "Being the creative director at Celine for six and a half years [from 1997–2004]. To me, Paris was Funny Face! The surprise of Mrs. Obama wearing Michael Kors for her first official portrait [in 2009]. We had entered modern times. Going public! [In 2011] I think we were the largest IPO in American fashion history [raising $944 million, valuing the company at $3.8 billion]. My mom was there when I rang the bell [at the NYSE]. Both of us were looking at each other like, 'Wow.'"

Along with Versace and Jimmy Choo, Kors's namesake business is now under the umbrella of parent company Capri Holdings, a behemoth reportedly worth nearly $8 billion. That is certainly a point of pride, and Kors could have cashed out and retired long ago, but what fun would that be? Like most creatives, he is curious and empathetic but also deeply sociable. "I do it for the people who wear my designs," he says. "I do not do this for the fashion insider pack. It's really hard work, so, I mean, you'd better love it." Even during the unexpected twist of lockdown, Kors stayed in touch with his loyal fan base through endless virtual trunk shows. "I thought Zoom was a children's television show in the '70s," quips Kors, who, along with his husband, Lance LePere, also used the platform to continue fundraising efforts with charities like God's Love We Deliver and the United Nations World Food Programme. "I had no idea. It was like, 'I can actually do personal appearances with women in Switzerland and Los Angeles at the same time? That's incredible.'"

“I do not do this for the fashion insider pack. It’s really hard work, so, I mean, you’d better love it.”

Kors's charisma is not lost on the industry. He beams a bit when he mentions that in 2010 he was the youngest person ever to receive the Council of Fashion Designers of America's Geoffrey Beene Lifetime Achievement Award, an accolade voted on unanimously by his peers. As Kors's frequent muse Wek says, fashion "doesn't have to be cutthroat. It doesn't have to be disrespectful. We can actually look great in well-made clothing and have a sense of humor, and he gets that." For theater actresses, Kors is the ultimate dream—a designer who had a penchant for dressing Broadway stars before it became cool to do so. "There used to be this feeling of Broadway being the carnies of the entertainment industry," says Laura Benanti. "Michael would lend gorgeous dresses and make us feel as special as TV and film performers are made to feel all the time." "I'm 4-foot-11. I would give anything for just one of Alek's legs," jokes Kristin Chenoweth. "It just goes to show that what works on her, works on me. He does it for everybody."

Sara Bareilles concurs. The Grammy winner first became aware of Kors as a fan of Project Runway, where he served as a judge for 10 seasons. They finally met when Kors popped backstage following a performance of her hit musical Waitress. "He's just one of those designers who takes care of women, and I love that about him," says Bareilles. She eventually ended up singing at his spring 2018 show. "He's from Long Island, and I'm a Jersey girl," says Jane Krakowski, who wore an asymmetrical Kors sheath ("in pamplemousse, I'll never forget the name of that color") to accept the Tony Award for best featured actress in a musical for Nine in 2003. "We have our mutual moxie in us. The good guy got an empire." The pandemic afforded Kors the opportunity to look at his business in new ways. Though he claims to be "a Luddite beyond," going out to restaurants with QR-coded menus sparked the idea for the MK40 Reissue Capsule, photographed exclusively for this shoot. Digging into his archives, he updated 16 iconic looks and refashioned them with a QR code on the tag that, once scanned, will take customers to a microsite that reveals the history of each garment and who originally wore it. ("You're Madonna, and you're Cindy Crawford," he teased Krakowski and Benanti of their dresses' previous incarnations.) The MK40 Reissue Capsule and plenty of downtime with his fashion-curious nieces also got Kors thinking more about the long-term effects of his brand's own corporate responsibility. Having already discontinued the use of fur in 2018, he is now working with textile and material suppliers to address questions of ethical sourcing and other supply-chain- related issues. He knows there is work to be done, especially given the generation of women who are more likely to purchase pieces from The RealReal rather than buy new. "It's certainly not perfect," he says. "It's like an elephant tap-dancing on a thumbtack and asking her to tap-dance backward. So, we've got to slowly get going and let the consumer know that this is a process and we're in it together. I don't think we're there, but I think the conversation is important to continue to have." He pauses. "Not that long ago, everyone was like, 'Isn't it amazing? I bought a dress for $11, and I wore it on Friday night and then I threw it out.' And I don't think that's amazing."

As a kingpin of American fashion, Kors is excited by those who are following in his footsteps. He mentors students for FIT's scholarship program and finds solace in knowing that some of the undergrads he's been speaking with are oozing creativity even while in confinement. "It's The Unsinkable Molly Brown," he says with a laugh, referencing the musical about the famed Titanic survivor. "We're not down yet. We're popping right back up." It is pointed out that Telfar Clemens — the zeitgeisty Liberian-American designer whose democratized approach to fashion includes genderless, affordable clothing and accessories promoted via social media — has said he hopes to model his own brand after Kors's. Kors kicks the compliment back to his mentor, Bill Blass, who loved doing trunk shows and interacting with his customers. Of Clemens, Kors says, "I think he's the same way. Instagram is the modern trunk show." As the Great White Way prepares for a triumphant return, Kors is taking his love of Broadway one step further. He and LePere are making their second foray into producing with the upcoming Sam Mendes–directed The Lehman Trilogy, which is resuming previews in September after a pandemic halt. (Their first show, Network, earned Bryan Cranston a Tony for best actor in 2019.) And he's looking forward to dressing the part. "I'm an optimistic realist," he says. "I do not think we are going to Jay Gatsby's party in the fall, but I do think we want to step out and see people and get back to life." (Kors has already confirmed his spring 2022 show will take place in person.) When asked which Broadway show he thinks most closely resembles his own career arc, Kors chooses A Chorus Line, which, ironically, debuted at the Shubert Theatre 46 years ago. "You have this group of wannabes who want to make it. They love what they do, and they're driven by love," says Kors. "Then, at the end, they're cast in the show they've dreamed of and get to put on their gold costumes. And that's what I feel like. I mean, I auditioned. I got the part, and, OK, I would not be great on the kick line, but I'm tipping my gold hat to everyone."

Photography by Christian Cody. All clothing and accessories, worn throughout, Michael Kors Collection.

For more stories like this, pick up the September 2021 issue of InStyle, available on newsstands, on Amazon, and for digital download Aug. 13th.