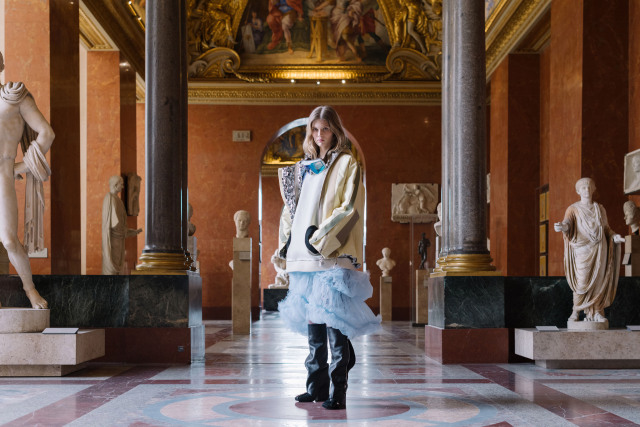 Nicolas Ghesquière capped off an extra long, digital-only Paris Fashion Week on Wednesday with an invigorating blast of fashion, parading bubble skirts, meaty parkas, quilted and puddling pants and densely embellished dresses through the Michelangelo and Daru galleries at the Louvre.

Who else would plop a sparkly ski jacket and big sweatshirt over a gorgeous crumple of frothy tulle? Or a majestic, two-tone sculpted cape over a pale denim jumpsuit? Ghesquière always gets the last word on the international marathon of collections and he invariably manages to wake up the eyes and point fashion in some unexpected direction.

Unable to take a plane for inspiration, he decided to mind travel and settled on mythology, partly as a way to explore different representations of femininity: Diana synonymous with conquest, Minerva with science, and Venus with seduction, for example.

“I started the season thinking [about] what could be a wonderful trip, what could be the most dreamy escape,” he said in an exclusive preview interview. “And I thought it was very interesting to try to connect and to express these different facets of femininity.”

The theme was etched gently, and he fastidiously avoided draping, but there were some takes on Grecian sandals and gladiator skirts, the latter with the strips gently padded. Reflecting on the strange and unsettling here-and-now of the pandemic, which has fanned comfort dressing, Ghesquière softened his highly decorative collection — dangling lace here, rich brocades there — with light wadding.

Cozy polar fleece turned out to be a terrific vehicle for the unmistakable black-and-gray prints of Fornasetti, with whom Vuitton forged a partnership for this collection. Faces and architectural motifs also looked fantastic on Keepall, Noé, Alma and Petite-Malle bags.

In between the noisier looks, he tossed in one of the best pea coats of the season, oversize with a flash of white on the placket, along with a waist-nipped blazer, and a terrific LBD with a flash of print at the top, now something of a house signature.

The models whisked by an array of priceless Greek, Roman and Etruscan statues, which are hardly estranged from current fashion attitudes. In the show notes, Vuitton pointed out that many couture poses are based on contrapposto, a stance that first appeared in the 6th century BC.