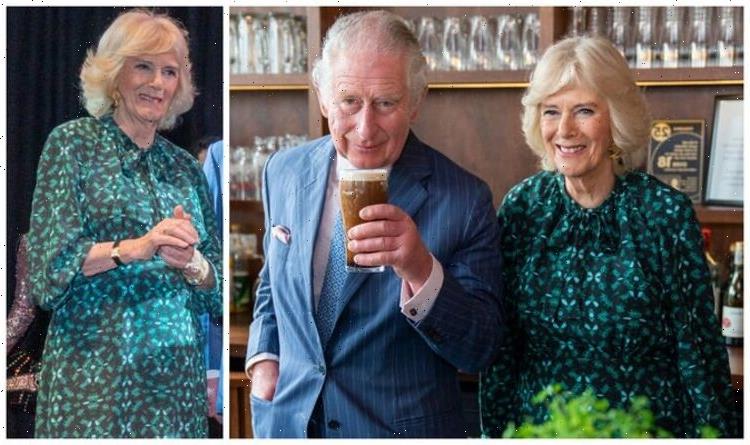 Camilla, the Duchess of Cornwall and Prince Charles began preparing for St Patrick’s Day celebrations early as they headed to the Irish Cultural Centre in London. The Duchess looked very stylish and on-trend in her green silk print dress by Cefinn. Cefinn is designer womenswear designed by Samantha Cameron, the wife of former Prime Minister David Cameron.

Green is traditionally worn for St Patrick’s Day celebrations as it’s the national colour for Ireland.

The Duchess paid tribute to Ireland by choosing the green silk print dress by Samantha Cameron.

It also featured a bow on the front along her collar for a sweet touch.

The dress was full length which Camilla paired with her staple black knee-length boots.

Commenting on the scenes, Twitter user Lucy Piper wrote: “They are so lovely together”.

Meanwhile, another fan was less impressed, saying: “She’d be better off wearing an Irish designer instead of something by the wife of a former Prime Minister.”

The royal couple were treated to some Irish dancing and traditional music demonstrations.

Later on, Prince Charles attempted to pull a pint of Guinness and seemed to thoroughly enjoy the beverage.

The Duchess looked on as the Prince of Wales was taught how to properly pull two pints of Guinness – a process which can take up to two minutes.

In a heartwarming moment caught on camera, Camilla also quietly told her husband he had been left with a spot of Guinness froth on his nose after sipping the stout.

After quickly cleaning his face, the Prince of Wales burst out in laughter.

They were then given a quick lesson on how to play the bodhrán, a traditional Irish drum.

This engagement comes just days before the future King and his wife are set to depart for the Republic of Ireland.

The pair will visit the country between March 23 and 25, as announced last month.

Prince Charles and Camilla’s visit to the Irish centre comes just two days before Kate and William are to attend the St Patrick’s Day Parade at Mons Barracks in Aldershot.

Commenting on the scenes, Twitter user Lucy Piper wrote: “They are so lovely together.”

Another social media user @steenygirl added: “I can never keep my toes still when I hear that music.”