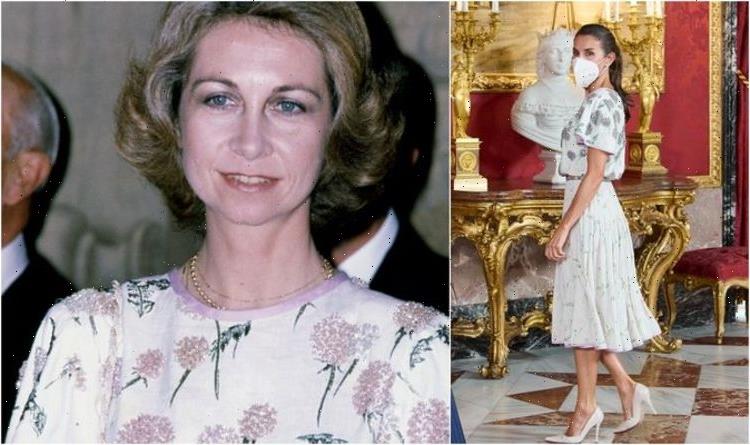 Queen Letizia wore a recycled dress as she joined her husband King Felipe VI to welcome the Chilean president in Madrid. Letizia, 48, is known for her love of recycling outfits, and her mother-in-law Queen Sofia, 82, first debuted the ensemble in Rome in 1981.

The dress is a stunning short-sleeved frock with a floral embroidered bodice and a flared skirt.

One fan wrote: “Queen Letizia was looking flawless in Queen Sofia’s dress from 1981.”

Another added: “Yes!!! This is one of my favourite looks of hers, it is such a look!”

A royal superfan commented saying: “My Mum and I are obsessed with Queen Letizia of Spain and we always text each other pictures of her like fangirls.”

Her mother-in-law Queen Sofia, 82, the wife of King Juan Carlos I, first wore the outfit during a trip to Rome in 1981.

Felipe and Letizia, parents to Princesses Leonor, 15, and Sofia, 14, received Chilean President Sebastian Pinera, who is on a visit to Spain.

They welcomed him at the Royal Palace in Madrid before an official lunch was held.

Looking effortlessly elegant for the occasion, Letizia appeared to have updated her mother-in-law’s dress with new silver gems on the floral decorations.

She also paired it with a matching shimmering belt to highlight her slender waist, while sporting nude heels designed by Magrit.

Adding a touch of extra glamour to her ensemble, she wore a pair of recycled £5,841 Chanel earrings in the shape of a feather.

They were made of diamonds and white gold and looked fantastic on Queen Letizia.

Letizia completed her look by wearing a slicked-back ponytail and smokey eye makeup.

Last week Letizia and Felipe said goodbye to their daughter Princess Leonor as she left for her new boarding school in Wales.

Heir to the Spanish throne Leonor has enrolled on a £67,000, two-year course to study for her International Baccalaureate diploma at UWC Atlantic College.

The school, situated in a 12th-century castle in Wales, offers activities and subjects like Tai Chi and Tibetan literature, leading it to be nicknamed ‘Hippie Hogwarts’.

King Willem-Alexander of the Netherlands studied at  UWC Atlantic College in the 1980s and Belgian heir to the throne Princess Elisabeth graduated from there last year.

Princess Alexia of the Netherlands is also due to be a classmate of Princess Leonor’s at UWC.

Queen Letizia wore a Maria Malo little black dress for her return to her royal duties on Monday following her summer vacation, and the death of her grandmother in July.

She was attending the Retina ECO awards in Madrid and looked sensational.