“You know what’s so great about this?” said Lake Bell, nuzzling a husky mix named Kylo at the A.S.P.C.A. adoption shelter on the Upper East Side. “I’m going to pick up poop at some point.”

Ms. Bell, an actress and filmmaker who made a splash with her 2013 feature-film directorial debut, “In a World…,” was back in the neighborhood where she grew up to publicize a considerably more mass-market project: her new ABC sitcom, “Bless This Mess.” It is a “Green Acres”-ish satire about a kombucha-sipping New York couple who downshift (or is it upshift?) to a new life among the cows and goats on a Nebraska farm.

On a break from a hectic publicity schedule last month, she decided to commune with a more quotidian breed of domesticated animal. A longtime supporter of the A.S.P.C.A., Ms. Bell, 40, has been a dog person for as long as she can remember. “I was always the kid that would go and pet dogs before you asked their owners and get bitten,” she said.

In her home in Los Angeles, Ms. Bell her husband, Scott Campbell, a tattoo artist and cannabis entrepreneur, have an 8-year-old pit bull-Labrador mix named Texas, and are looking for a new rescue to replace Ms. Bell’s former “best friend,” a blue-nosed Staffordshire bull terrier named Margaret, who died two years ago.

Dogs are also an important part of their parenting philosophy. Pet ownership can assist their daughter, Nova, 4, and son Ozgood, who is almost 2, in “learning how to love,” she said. “It’s a really good exercise in loving something, and when they pass away, it’s like another life lesson.”

As an eager Kylo tugged on the leash, Ms. Bell walked out of the shelter and toward Carl Schurz Park, home to Gracie Mansion along the East River. She attended the nearby Chapin School and looked right at home among the elegant apartment buildings, wearing a geometric-print Marni coat and a silvery Rag & Bone top.

Growing up in Manhattan meant that her primary exposure to wildlife consisted of pigeons and subway rats. Even so, animals have played an outsize role in her career of late. Ms. Bell provided the voice for Chloe in the animated 2016 film “The Secret Life of Pets” (and the forthcoming sequel). The role challenged her to inhabit the mind of a refrigerator-raiding cat. 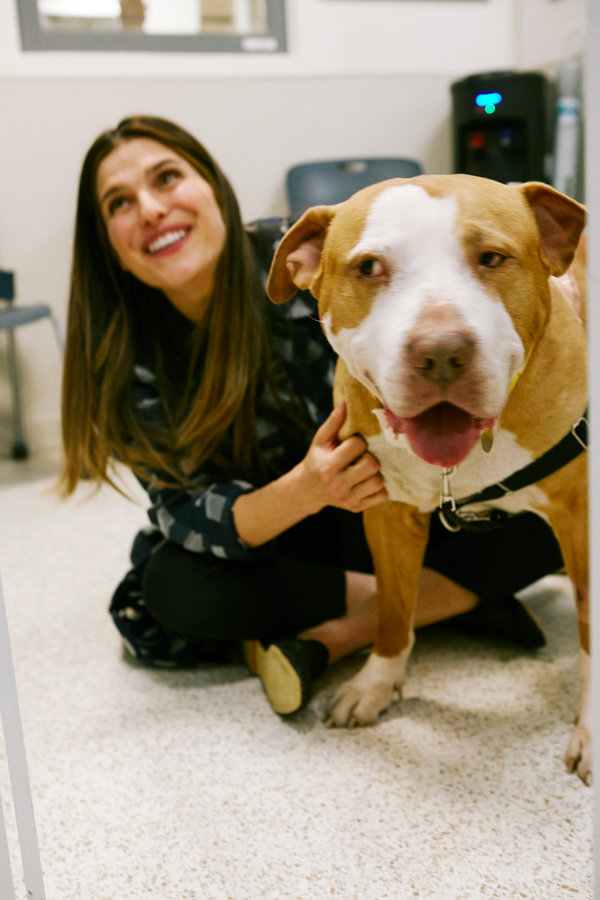 “When you play an animal, you just see every animal as more amplified,” she said. “There is definitely an inner life to every single one.” Even so, method acting was not an option. “I cannot produce hairballs,” she said.

And on “Bless This Mess,” which runs for six episodes ending on May 21, “I get to be around chickens, goats and cows, and that’s just a Wednesday,” she said.

So far, the livestock has turned in utterly convincing performances. “The chickens lay eggs in the middle of a scene,” she said. “It’s like, ‘What have I done in this scene?’ I don’t know, I said some lines and I walked onto my mark. Meanwhile, the chicken has just made breakfast.”

As the show’s co-creator and female lead, Ms. Bell did not exactly cast herself against type. Her character, Rio, is a high-strung New York therapist who packs her Nespresso machine for the agrarian life after her husband, Mike, a music journalist played by Dax Shepard, inherits a bucolic farm from a great-aunt.

To adjust to life on a dilapidated homestead, however, the couple must turn to tractor-savvy locals like Rudy (Ed Begley Jr.) and Constance (Pam Grier) to coax even a few sprigs of alfalfa from the sunbaked ground.

Learning to coax humor out of alfalfa was something of a challenge for the bicoastal Ms. Bell, whose father is a Manhattan commercial real estate and racetrack developer and mother owns an interior design firm. “How do you make seeds funny?” she said.

In that regard, her co-star Ms. Grier proved invaluable, serving as an unofficial technical adviser. Known for her blaxploitation films of the 1970s like “Foxy Brown,” Ms. Grier, 69, now lives on a ranch in Colorado, where she tends rescued horses and uses them in therapy for special needs children.

“When she flew in to meet with us, she had on a worn-in straw hat and work gloves tucked in her back pocket that were patinaed from actual handling of pitchforks and hay bales,” Ms. Bell said.

As she recounted the story, Kylo wandered into a neatly tended flower bed near Gracie Mansion and relieved himself. “No, the tulips!” Ms. Bell said.

In terms of upbringing, Ms. Bell has more than a few things in common with the Lisa character from the 1960s sitcom “Green Acres.” That character, played memorably by Eva Gabor, is a Park Avenue princess who finds herself attempting a new life in the sticks, surrounded by corn fields and cornier dialogue.

In “Bless This Mess,” however, the joke is on the city slickers, not the country folk. “We’re the rubes,” Ms. Bell said.

Indeed, Rio and Mike are constantly dropping references to ashwagandha tea, hand-spun noodles and turmeric crackers, turning the show into a parody of the Goop-style frothiness that Ms. Bell finds herself surrounded by in Southern California.

The show also functions as a form of self-parody, since Ms. Bell and her husband are forever dabbling in the latest wellness fads like cryotherapy, as they fantasize about bailing out of city life and going back to the land.

“Scott could ride dirt bikes, I could plant an edible garden or whatnot,” she said. “It’s like a Pinterest page comes to life.”