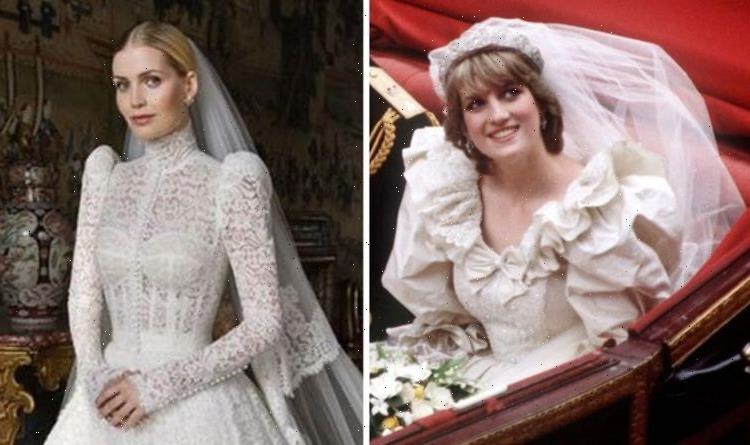 Lady Kitty Spencer, the niece of Princess Diana, has made headlines in recent months after marrying her new husband in Rome in July. Royal fans were treated to snippets of the wedding, including images of Kitty in not one, but five, Dolce and Gabbana dresses throughout her three-day celebrations. On the wedding day itself, Kitty wore a lace white dress with long sleeves, reminiscent of Grace Kelly, the late Princess of Monaco, and the Duchess of Cambridge.

As well as the dress, Kitty wore a long white veil, pinned to her sleek blonde locks which were swept back in an elegant updo.

Usually, the veil on a royal wedding dress is kept in place with a tiara, but royal fans were quick to notice Kitty wasn’t wearing one.

Princess Diana’s niece decided not to wear her family’s tiara on her big day, even though it was worn by her aunt, as well as her mother.

In line with royal tradition, Kitty would have been permitted to wear the Spencer Tiara, last worn by Lady Celia McCorquodale in June 2018.

She married George Woodhouse in a country affair in Stoke Rochford, Lincolnshire.

The Spencer Tiara is a family heirloom given to Diana’s grandmother, Cynthia Spencer as a wedding gift.

It was created in the early 1930s and remounted with new elements by Garrard in 1937, resulting in the floral diamond design seen today.

The tiara was later passed down to Lady Sarah Spencer and she wore it on her wedding day to Neil Edmund McCorquodale in 1980.

A year later, it was most famously worn by Diana when she married Prince Charles.

Although worn by generations of the Spencer family, Kitty opted not to follow suit and don the tiara.

The reason is not known.

While there is no official value for the piece, a similar tiara also owned by the Spencer family sold $225,000 in 2018.

This tiara was 48 carats and featured 800 cut diamonds.

However, diamond expert Max Stone of online jewellers Stephen Stone has estimated the value of the Spencer Tiara today.

He said: “Based on the selling price of a similar Spencer family tiara, I’d estimate this piece to be worth around £400,000.

“With its incredible detail and the high-quality diamonds, not to mention its popularity, this is no doubt a very valuable heirloom.”