Athleisure vibes! Kendall Jenner stunned as she rocked a neutral colored set from Alo Yoga while lounging at home.

Kendall Jenner knows how to lounge in style. The model, 26, stunned as she rocked a crop top and matching high waisted bike shorts from Alo on Wednesday, March 16. In the first image, she laid down over a chair as she showed off a taupe brown set with white ribbed socks, and in the next, she sat on the floor as she posed with a plant behind her.

The Kardashians on Hulu star was still rocking her new red hair from the Prada show at Milan Fashion Week, which is a dramatic shift from her signature brunette locks. Kenny seems to be embracing the lighter hue with open arms, though, and surprisingly hasn’t gone back to her dark brown for nearly two weeks!

Alo’s latest line, launched during Women’s History Month, declares it’s “made for movement.” The stretchy fabric is “yogi-tested” per the brand, and is meant to reflect nature-inspired tones with neutral shades. Kendall has been an Alo Partner for some time, appearing in various campaigns including one for their ultra-popular Stunner Puffer.

Kendall was looking ultra-fit in the gorgeous photos, which sister Khloe Kardashian, 37, took note of! “Ok kennnnnny,” the Good American founder — who is 11 years older than her younger sister — commented. Several other pals were also here for the red hair. “This hair on you,” Olivia Pierson wrote, while Jen Atkin added, “Omg this hair!!!” Fans also chimed in, adding, “The hair is giving” while Kylie Jenner’s BFF Yris Palmer gushed, “Yess hair color!” 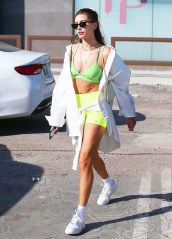 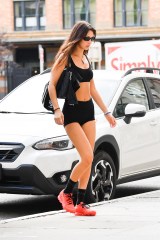 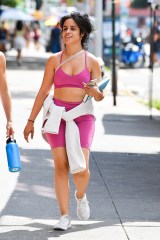 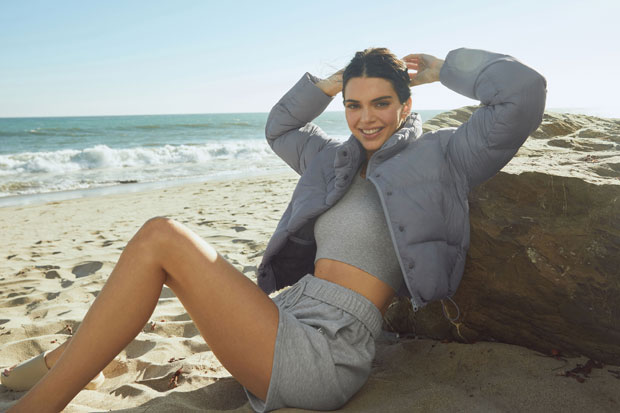 Kris Jenner even mentioned the 818 tequila founder’s new ‘do in an interview with Variety published last week. “We’re filming all day…and I had to get up so I could watch the Prada show that Kendall was walking in — as a redhead! Did you see?” she exclaimed to the reporter when discussing her day.

Off the runway, Kendall has been keeping busy: the California native was spotted at the newly opened Lavo Ristorante on Sunset with sisters Kim Kardashian, 41, and Khloe for an event to promote her buzzy tequila brand! She kept her red hair straight and down, wearing a ribbed mini dress, to-the-knee black boots and Balenciaga’s black Le Cagole handbag.