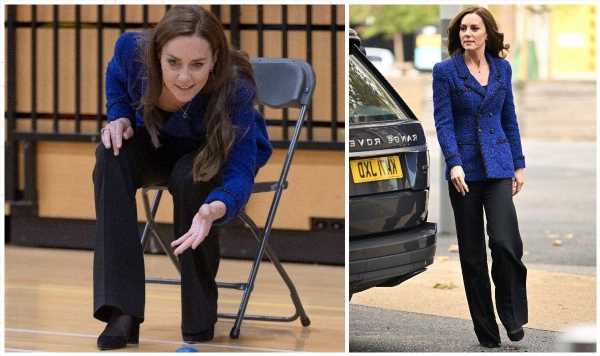 Royals: Kate tries her hand at Boccia in Stratford

Kate Middleton arrived at the Copper Box Arena to celebrate the 10th anniversary of Coach Core in London on Thursday dressed impeccably. However, she made an interesting style choice that some royal fans picked up on.

The Princess of Wales donned a vintage Chanel blazer from 1995, which she teamed with a very long, wide-legged pair of black trousers from Roland Mouret.

However, Kate wore another garment on her legs which confused some fans.

Twitter user @Solidmoonlight tweeted: “Just wanted to point out that Kate is wearing black tights with her trousers?

“Has she done that before?”

Usually when the royals wear skirts or dresses they are required to wear tights.

Daena Borrowman, the Marketing Manager at jewellerybox previously spoke to Express.co.uk about this style protocol.

She said: “There are dozens of protocols in place that stylists and dressers of the royals have to familiarise themselves with to prevent working royals from landing into embarrassing fashion faux pas.

“It is customary for senior royals to dress modestly during public appearances, in order to preserve the sanctity of the Royal Family.

“Royal women are expected to wear tights whenever their legs are exposed in public.

“The Princess of Wales, who favours nude tights and has worn them with many iconic outfits, has often triggered the sellout of nude tights.

“Pennies or small weights are sewed into the hemlines of dresses to avoid them being blown up by a strong gust of British wind.

“Royal women are also discouraged from showing off their cleavage.

“In order to still wear bespoke dresses with daring necklines, the Princess of Wales has her evening gowns altered ever so slightly to keep with the rules, while her later mother-in-law, Princess Diana used to hold her clutch to her chest while exiting vehicles.”

However, it is unclear why Kate felt the need to wear tights on Thursday as she was already covering her legs with her £1,152 Axon side zip wide-legged trousers from Roland Mouret.

These trousers are so popular that they have sold out.

The weather averaged 16 degrees Celsius today in London, so it was not the warmest weather, hence why the Princess may have felt the need to wrap up warm.

Also, the Princess wore a pair of Gianvito Rossi ‘Piper’ pumps, which retail for £520.

These were block heels for Kate, which did not look uncomfortable as they would have offered plenty of support.

However, it is possible the Princess could have a blister, just like any other Briton who wears heels all day and had to wear tights to protect her feet.