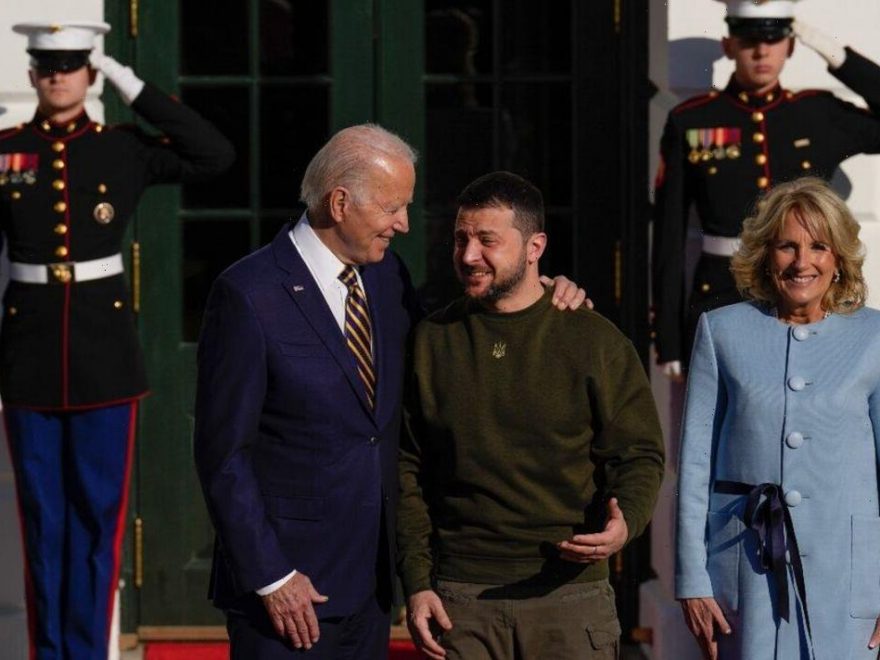 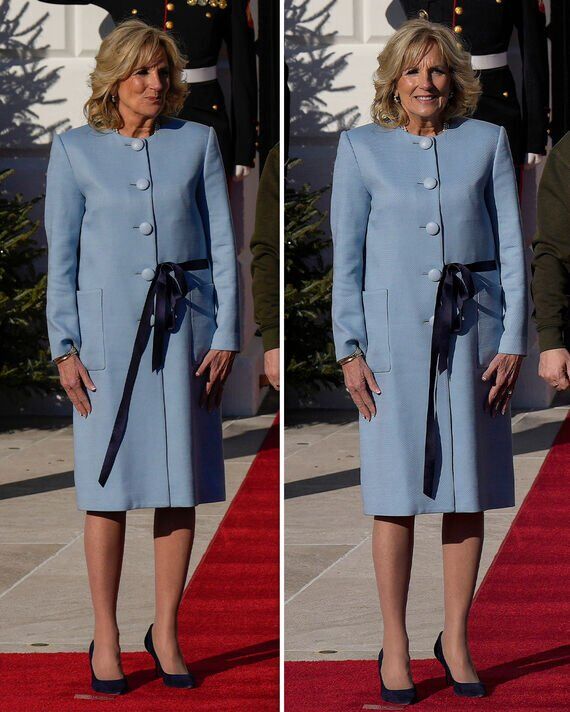 Jill Biden joined her husband, President of the US Joe Biden, to welcome Volodymyr Zelensky to Washington D.C. The Ukranian president is meeting with President Biden on his first known trip outside of Ukraine since the Russian invasion began, and the two leaders are expected to discuss continuing military aid.

Jill Biden is known for her elegant fashion looks, and yesterday was no exception.

The First Lady looked dazzling in a pale blue coat that reached her knees. The coat was collarless and had large buttons running down its centre.

It was a soft blue and seemed to be made out of a soft material too. As it wasn’t clear what Mrs Biden was wearing underneath the coat, the garment looked like a coat dress.

It is an elegant and classy garment that can be dressed up or down. It is also practical as one doesn’t have to put much thought into what to wear underneath.

Mrs Biden wore nude tights and a pair of navy blue heels to complete her outfit.

Her blonde hair was neatly tousled and she wore make-up that made her skin glow.

As for accessories, she donned pearl earrings shaped in hoops and multiple strings of pearls around her neck.

She also had multiple bangles around her wrist – most were gold, while one was embellished with pearls.

But what stood out about Mrs Biden’s outfit was the navy blue ribbon on her coat – it was tied to the coat’s left side, and hung there, instead of being wrapped around its middle.

Even the First Lady’s nails were classy – she had had them manicured with glossy, clear varnish and a white tip.

Joe Biden also made a political statement by wearing a blue and yellow striped tie, showing his support for Ukraine.

Volodymyr Zelensky was not in a suit but a sweatshirt and cargo trousers. The sweatshirt was army green and embroidered with his country’s gold trident, which is part of its coat of arms.

Thus, Mr Zelensky was too making a statement through his clothes. Even the cargo trousers and boots were a nod to the ongoing war between his country and Russia.

Mr Zelensky has been wearing relaxed outfits ever since Russia invaded Ukraine. Earlier this year, he ditched his smart suits in favour of t-shirts and sweatshirts.

Fans of Jill and Joe Biden, as well as Volodymyr Zelensky, were quick to comment on the meeting yesterday. Some noted Mrs Biden’s choice of outfit and had thoughts to share about it.

Instagram user @coblaylock said: “Loooove Jill, but what’s with the weird half belt on her coat? It’s quite confusing.” User @gaudywhispers agreed. They wrote: “What’s with her like half belt ribbon thing? Is part missing or is that just the fashion.”

Referring to Mr Zelensky, user @shakewaits wrote: “He’s wearing what his soldiers are wearing right now.” User @rmsgreeneyedlady commented: “I love that he wore that sweatshirt, he is wearing it right now for the address too.”

User @francieneedlepoints added: “This was such a powerful attire choice.”