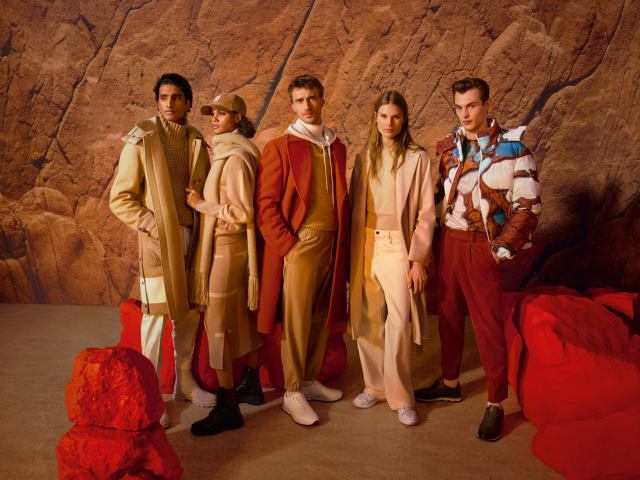 Hugo Boss’ new chief executive officer Daniel Grieder has been in the apparel industry for almost 40 years. More than half of those were spent with Tommy Hilfiger, one of Boss’ biggest competitors. Grieder helped introduce the Hilfiger label to Europeans and, after 2014 when the brand was bought by PVH Corp., he headed Tommy Hilfiger Global and PVH Europe.

Then last year, after several attempts to lure the Swiss businessman to Hugo Boss, Grieder finally agreed to take on a company that some would probably have described as a brand struggling to stay relevant.

This week Grieder unveiled an ambitious five-year strategy for Boss, named “Claim 5,” even as on Wednesday the German fashion brand reported results that, while a vast improvement on 2020, still failed to match those seen in the corresponding quarter of 2019.

Here, in an exclusive interview, WWD speaks with Grieder about where Boss went astray and his goals for the brand.

WWD: Your new strategy is certainly ambitious. And you also talked about Hugo Boss making “a comeback.” What do you think went wrong there?

Daniel Grieder: When I started with Tommy, we only looked at what Hugo Boss was doing — because they were clearly a leader in the premium, affordable luxury business. From my point of view, they were the best. At that time, I was always playing catch-up with Hugo Boss because back then, they did everything better than Tommy.

But over the past eight to 10 years, [Hugo Boss] lost its relevance. They got old. When you looked in the stores, it was flat. There was no excitement, no campaign that got your pulse racing. They lost that feeling — the sexiness, the desirability — bit by bit over the years.

To be honest, when I took the job I wasn’t sure [about the brand]. But I’ve been studying the lines and how we could update them and by the time I started on June 1, I was absolutely convinced that this brand can make a comeback. They were there, they lost it, now they’re going to win again. 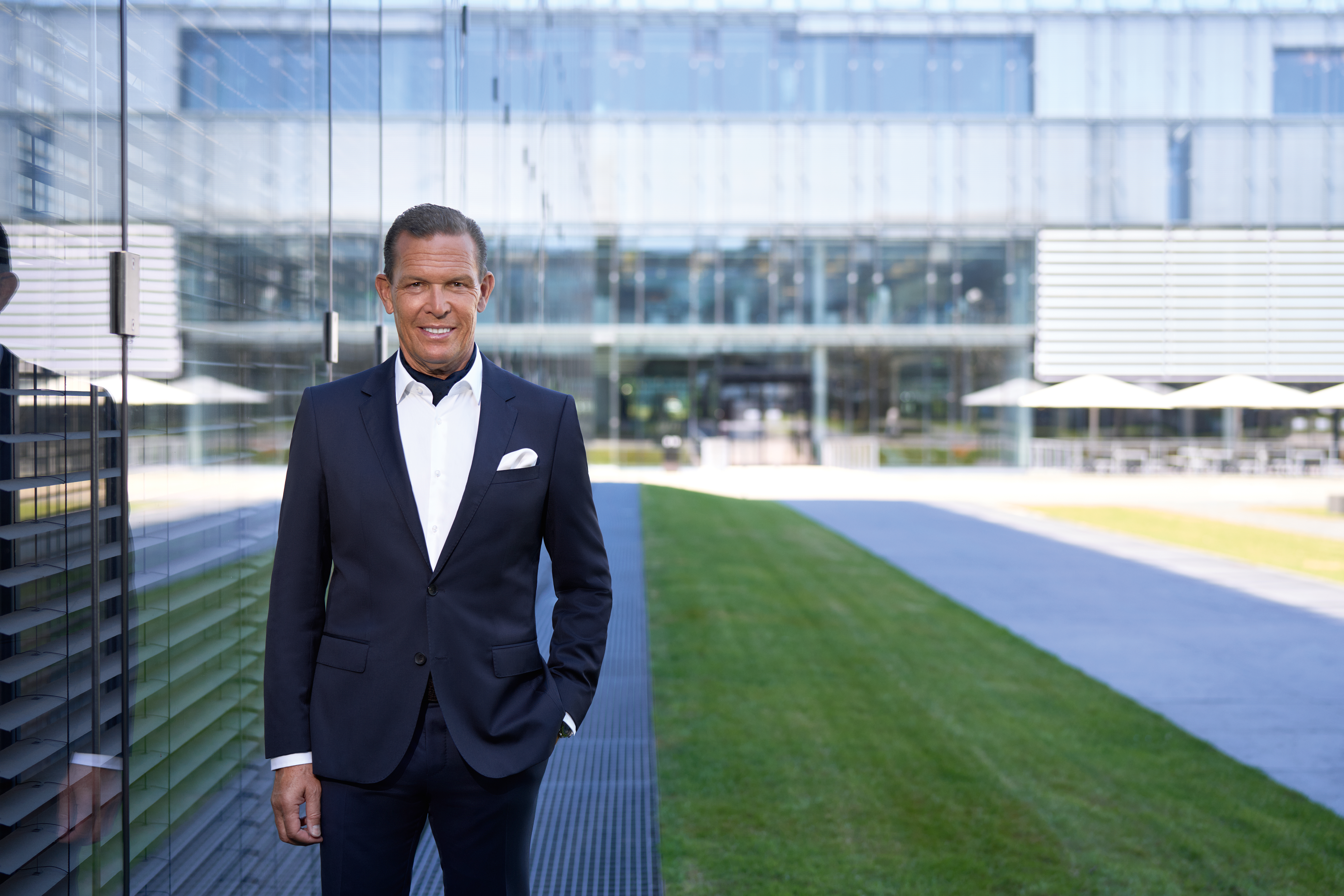 WWD: Yet after listening to your presentation about the new strategy, it doesn’t sound like Hugo Boss’ actual product is changing very much. It sounds like the strategy is more about marketing and improving digital services.

D.G.: The product is definitely improving. If you came to the showroom today, you would see a collection that already appeals much more to a younger consumer. We have also added a lot of value for money. We are adding innovations — things like a garment being wrinkle- or water-resistant — or we might be using better-quality fabric or adding other functions. So if you spent 120 euros on a garment from Hugo Boss, you would know that you’re getting a lot more from this product compared to other brands.

WWD: Thanks to the COVID-19 pandemic, the past year and a half has been hard on a brand that specializes in formal- and occasion wear. Over the past few months, Hugo Boss has talked a lot about moving into more casual clothing. How is that going?

D.G.: Our end consumer can get more than business wear from us. That’s why we added the extra categories — Boss Orange [for casual clothing] and Boss Green [for athleisure wear].

But we certainly don’t want to lose our formalwear. We think that it is going to shift toward business clothing that is more comfortable and more functional. It may be wrinkle-free or water-resistant, for instance. I think those qualities are going to be more important. We already have some of these qualities in the collection that we’re selling to retail and we’re calling this the “suit of the future.”

WWD: Which brings us to your plans for North America.

D.G.: In America, we are positioned as a suit company, so the first step is to make it clear that we are not just a suit company, we are a 24/7 lifestyle company. That’s what we need to bring into our North American distribution. We’ve already had some success with that, with our Russell Athletics capsule collection.

So we’re going to refresh our stores and try to attract a younger customer. We also want to expand our shop-in-shop business, the kind of thing we already have at Macy’s and Saks Fifth Avenue. But we want to go beyond the tailored sector. We want to add the casualwear and athleisure there, too. And with this new lifestyle offer we also want to offer more to stores like Nordstrom and Bloomingdale’s.

WWD: And how are things going for Hugo Boss in China? In the past there seems to have been a huge emphasis on business opportunities in Greater China for the brand. But now, with recent political tensions, it feels a bit more precarious.

D.G.: China has a lot of potential and we’re doing good business there, but that doesn’t mean we should focus only on China. I believe that Hugo Boss has the chance to grow in all regions, in Europe and America and the rest of Asia as well. 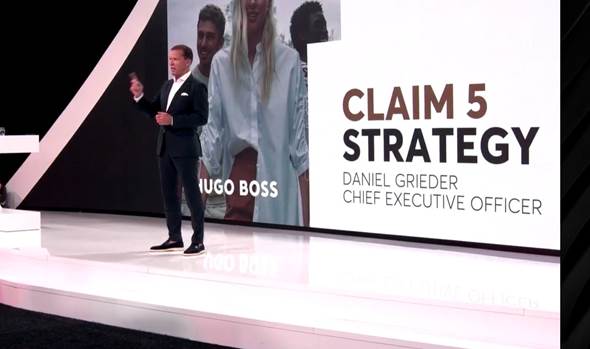 Grieder presented his five-year strategy for Hugo Boss during an online conference. Courtesy

WWD: Can you tell us some more about another major part of the “Claim 5” strategy, changes in the way Hugo Boss does digital?

D.G.: Every company collects data from their customers, and from everywhere. But when you ask them what they’re going to do with that data, how will they implement their findings, basically they can’t tell you. This is where everybody fails.

If you want to do it [analyze the data] yourself as a company, it takes a lot of time and you need a lot of experts. You need a lot of nerds to help you. I’ve learned that you can move much faster if you collaborate with a company that’s already specialized in this. You can accelerate your sales, both online and offline, much faster this way.

So we’re collaborating with a company called Metyis. They are setting up a digital campus in Portugal. However, every year, we’ll be buying 25 percent of that, so that in four years we’ll own that asset. We think that’s smart.

WWD: How does a brand like Hugo Boss catch up with the world’s ever-expanding luxury behemoths?

D.G.: We don’t want to compete with the luxury brands. We are in the premium/affordable luxury sector and that’s where we want to stay. Our competitors are the likes of Ralph Lauren, Calvin Klein and Tommy Hilfiger.

WWD: Turning Hugo Boss around after the COVID-19 pandemic is a big challenge. Are you worried you might not be able to do it?

D.G.: I think we have the best strategy and I totally believe in that strategy. But I also know that execution matters. That’s where a lot of companies struggle and I think in the past Hugo Boss has struggled with it, too. But I believe I’ve proved that I am able to deliver. I’ve been quite successful so far and I believe I can do it again here.