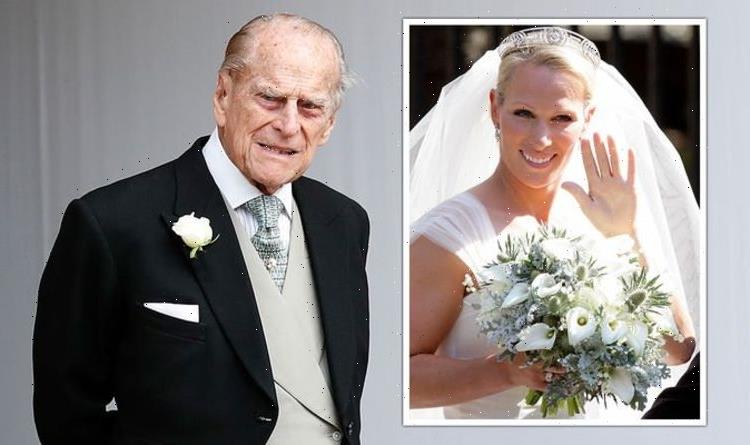 Zara Phillips married rugby ace Mike Tindall in 2011, in a private wedding in Scotland attended by the Queen and Prince Philip. Royal tradition dictates the Queen lends the royal bride a tiara from her collection to wear on her wedding day. But instead of picking one of the more traditional royal wedding tiaras, Zara Tindall opted to wear a tiara never before worn at a British royal wedding.

Zara Tindall wore the Meander Tiara for her wedding day, which is one of many tiaras in the Queen’s extensive collection.

The Meander Tiara was gifted to the Queen when she was still known as Princess Elizabeth, by Princess Alice of Greece and Denmark.

Princess Alice gave Elizabeth the tiara upon her marriage to her son, the future Prince Philip, Duke of Edinburgh.

But the Queen opted not to wear the Meander Tiara for her wedding, and instead wore the Queen Mary Fringe Tiara.

The Meander Tiara was then given to Princess Anne before she married Captain Mark Phillips in 1973.

But in keeping with her mother’s wedding choice, Anne also opted to wear the Queen Mary Fringe Tiara for her wedding day.

So when Anne’s daughter Zara tied the knot, the Meander Tiara was finally worn by a British royal bride on their wedding day.

Zara’s tiara choice paid tribute to her grandfather Philip, as well as his mother and Zara’s great-grandmother Princess Alice.

The Meander Tiara is Greek in style and features several glittering diamonds.

And should the Royal Family ever part with it, the tiara is thought to be worth millions of pounds.

Daena Borrowman, Marketing Manager at jewellerybox, told Express.co.uk: “The classically Greek meander design of the band is made of diamonds with the Greek key pattern, a central laurel wreath and two sections of honeysuckles.

“It was most likely made by Cartier in France and is worth between £2million and £4million.”

DON’T MISS:
Queen’s iconic tiara from Queen Victoria is ‘steeped in royal history’ [PICTURES]
Inside the story of Queen’s ‘favourite’ tiara, and how much it’s worth [INSIGHT]
Princess Diana’s £20m sapphire collection had ‘healing properties’ [ANALYSIS]

Other jewellery which belonged to Princess Alice of Greece and Denmark also now belongs to Philip’s widow, Queen Elizabeth II.

Prince Philip actually used diamonds once part of one of his mother’s collection for his engagement ring for Elizabeth.

Then known as Princess Alice of Battenberg, Alice was gifted a diamond and aquamarine tiara by her aunt and uncle, Tsar Nicholas II and Tsarina Alexandra of Russia, when she got married.

But Alice allowed the tiara to be dismantled, to provide the diamonds needed for Elizabeth’s engagement ring.

Philip Antrobus of London were tasked by Philip with making the engagement ring.

But the esteemed jeweller also made a matching Art Deco-inspired diamond bracelet for Philip to give the bride as a wedding present.