When asked what they believed brought them together in December 2017, Dr. Christine Gruessner and Przemyslaw Grabowski each offered an explanation that could be summed up in a single word: magnetism.

“We were instantly magnetized toward each other,” said Dr. Gruessner, 35, an internal medicine resident at the University of Minnesota.

“He was on a date with my best friend, and I was the third wheel,” Dr. Gruessner said, laughing. “We were all in a car going to the German Christmas Market outside of Boston, and I was in the front passenger seat as it was my job to navigate. But I kept missing all of the exits because I was too interested in talking to Przemyslaw, and my best friend was getting increasingly annoyed with me.

Mr. Grabowski had a little more to say.

“During that car ride, we discovered that we had a lot of similar values and we had very similar life stories,” he said. “We’re both very loyal and very determined people. When we love somebody we do everything for that other person.”

Mr. Grabowski had also discovered something else about Dr. Gruessner: She was engaged to another man, but the relationship was going nowhere.

So they played the waiting game.

“When that relationship ran its natural course and ended, I turned to Przemyslaw,” Dr. Gruessner said, “because we were good friends by then.”

He was, in his own words, “mesmerized and fascinated” by Dr. Gruessner from the very beginning, singing her praises constantly to anyone within earshot. 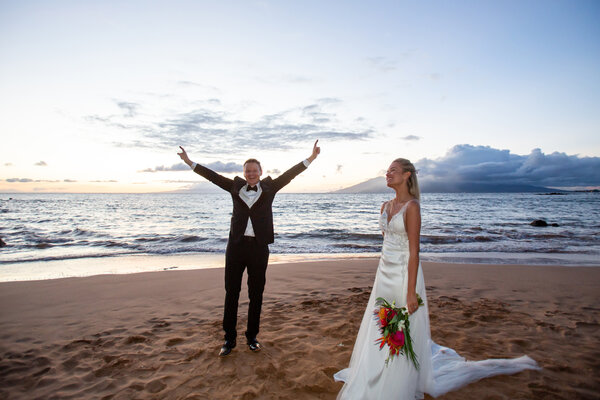 “Our characters really matched,” said Mr. Grabowski, who graduated from the University of Melbourne with degrees in mathematical physics and commerce actuarial studies, and has a master of actuarial studies from the University of New South Wales. “The energy that emanated from Christine was simply amazing,” he said. “I just love being around her. She’s so loving and caring.”

They began spending time together, but in June 2018, Dr. Gruessner moved to Minneapolis to begin a second residency.

“I was really very happy for her,” Mr. Grabowski said.

In the ensuing months, he began feeling more than a bit demagnetized.

So in December 2018, Dr. Gruessner decided to visit Boston and Mr. Grabowski. One night, after dinner in Boston’s North End, they decided to go for a walk, and somewhere along that route shared a first kiss.

The couple were married April 17 by Pia Aluli, who was ordained through New Passion Ministries, at the Andaz Maui at Wailea Resort in Hawaii.

Four guests were in attendance, including the bride’s parents, both medical doctors and professors at State University of New York Downstate Medical Center. Her father, Dr. Herb Rainer Gruessner, is a professor of surgery, and her mother, Dr. Angelika Gruessner, a professor of nephrology.

Because of Covid-19 travel restrictions, the groom’s parents, Dr. Iwona Grabowski and Dr. Cezary Grabowski, both physicians at the Endeavour Hills Family Practice in Melbourne, were unable to attend, though the bride and groom live-streamed the wedding.

“He has given me complete, unconditional love,” the bride said of the groom the day after they married. “He’s also given me a sense of adventure, openness and excitement to the world that I had never experienced.”