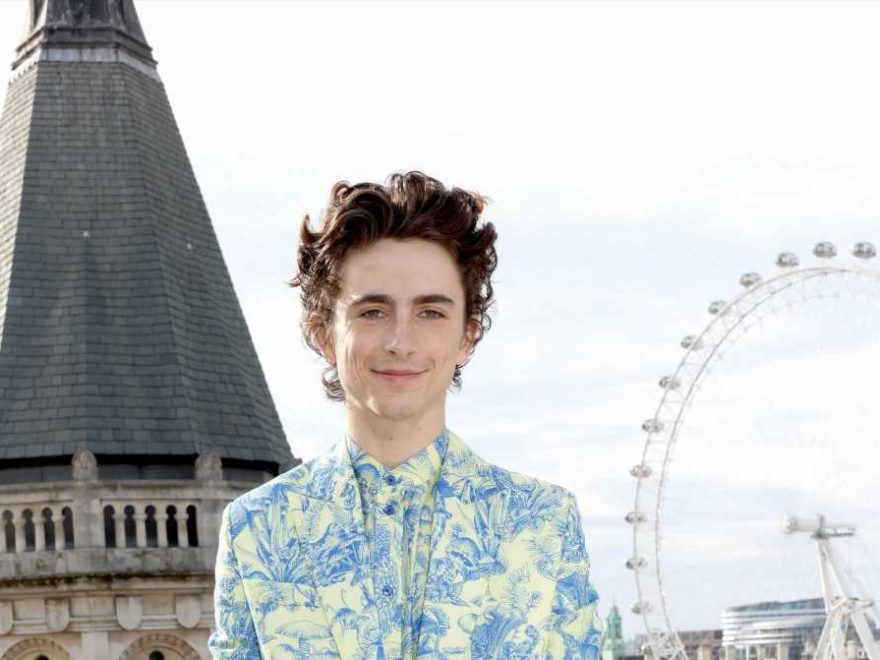 Timothee Chalamet pushes the envelope in the best way possible when it comes to men’s fashion. To celebrate the debut of his newest movie, “Dune,” on Oct. 22, Wonderwall.com is rounding up his wildest and most playful fashion moments, starting with his appearance at the 2021 Met Gala. For fashion’s biggest night, Timothee opted for a white satin Haider Ackermann tuxedo jacket, a Rick Owens turtleneck and, surprisingly, some clean white Chuck Taylors. Despite the fact that he wore sweatpants to the gala, he was able to elevate them with some 1920s Cartier brooches. All in all, this was a look only Timothee could pull off.

Timothee Chalamet wore a custom Stella McCartney suit in a blue toile-inspired mushroom print against a pale yellow background at the “Dune” photocall in London on Oct. 17, 2021.

Timothee Chalamet doesn’t shy away from standing out. Case in point? He wore this shiny metallic Tom Ford dinner suit to the premiere of “The French Dispatch” at the 2021 Cannes Film Festival and was the picture of cool as he paired it with black Celine Homme sunglasses and a number of Cartier rings.

One of Timothee Chalamet’s more unexpected red carpet looks made hedlines for days at the time. He arrived at the 2019 Golden Globe Awards in an embellished, dazzling harness by Louis Vuitton (the brand referred to it as a”bib”), which he wore over a tailored black shirt and trousers.

Haider Ackermann did it again for Timothee Chalamet, who stunned in this pewter gray ensemble, at the 76th Venice International Film Festival in 2019. The impeccably tailored suit was paired with a collarless shirt and two tonal belts cinching his waist. In styling the outfit, Timothee rolled up his pant legs to show off his black heeled shoes.

For the 2018 Oscar Nominees’ Luncheon, Timothee Chalamet played it a little safer in a dark green Gucci suit. But even when he’s “playing it safe,” he still manages to up the style quotient.

At the Australian premiere of his film “The King” in 2019, Timothee Chalamet completely owned the color blue. His monochromatic Haider Ackermann ensemble was a total win, especially worn with militaristic black boots, which gave the look a bit of an edge.

RELATED: The best and worst celebrity street style of 2021

In case it’s not already clear, Timothee Chalamet is not afraid of boldness. At the 2018 “Beautiful Boy” premiere in Los Angeles, the actor paired a red suit with a slightly lighter red shirt underneath. He’s always the coolest guy on the red carpet, even in white dad sneakers to complete the look.

At the Academy of Motion Picture Arts and Sciences’ Governors Awards in 2018, Timothee Chalamet again wore one of his favorite designers, Haider Ackermann, who crafted this blazer with an elaborate wavy design down the front.

Only Timothee Chalamet could pull off a hoodie at a film premiere and still be the rising king of fashion. For the BFI London Film Festival premiere of “The King” in 2019, he chose a midnight blue sequined velvet hoodie by Louis Vuitton. The actor didn’t let any aspect of his look compete with the hoodie, opting for his signature tousled locks and a simple pair of black trousers.

Timothee Chalamet eased into florals with this Alexander McQueen suit he wore to the Spanish premiere of his film “Beautiful Boy” in 2018. Along with trousers that matched his blue jacket embroidered with red cherry blossoms and birds, the actor wore $590 white-and red sneakers also from Alexander McQueen.

Timothee Chalamet wore this far bolder floral suit to the London premiere of “Beautiful Boy” in 2018. He was the picture of confidence in the bloom-covered single-breasted design by Alexander McQueen.

When Timothee Chalamet isn’t rocking a monochromatic look, he’s usually in a wildly printed suit, like this one he donned for the Critics’ Choice Awards in 2019. This ensemble — which from a distance looks like a distant galaxy — was designed by Alexander McQueen, another Timothee fave, and paired with white kicks.

For the Paris premiere of “Little Women” in 2019, Timothee Chalamet delivered a clear message when he hit the red carpet: Think pink. The actor wore a fuschia Stella McCartney suit paired with black Chelsea boots.

At the BAFTAs in London in 2019, Timothee Chalamet decided against a matching suit, instead matching his black, red and silver patterned shirt to his blazer and anchoring the combination with black skinny pants.

Earlier in Timothee Chalamet’s career as a leading man, he wore a military-inspired outfit to a 2017 InStyle event. The “Call Me by Your Name” star paired a light brown double-breasted jacket featuring black and gray details on the lapels with army green tailored trousers and black boots.

At the 2017 IFP Gotham Awards, Academy Award-nominated actor Timothee Chalamet showed off his love for a bold suit in this dark raspberry velvet creation, which he paired with a simple black tee underneath.

At a photocall for his film “The King” in South Korea in 2019, “Lady Bird” actor Timothee Chalamet wore one of his craziest looks yet — wildly printed, color-splattered overalls with a matching button-down shirt from the S.R. Studio LA. CA. Spring 2020 collection.

At the “Beautiful Boy” premiere during the 2018 Toronto International Film Festival, Timothee Chalamet and designer Haider Ackermann hit another home run. Timothee arrived in a slim-cut suit with striped grosgrain detailing and white appliqués throughout the pants and jacket. 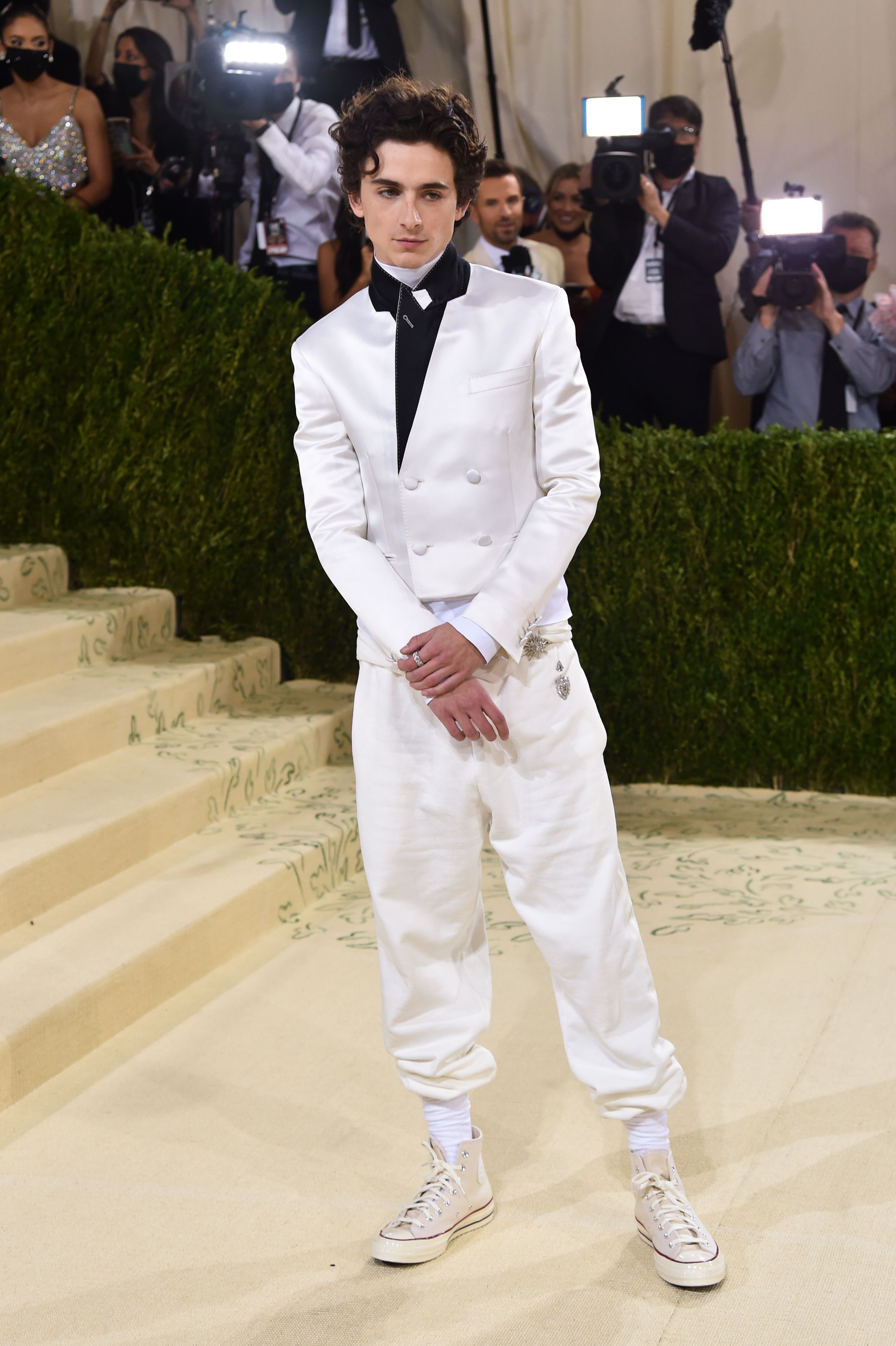 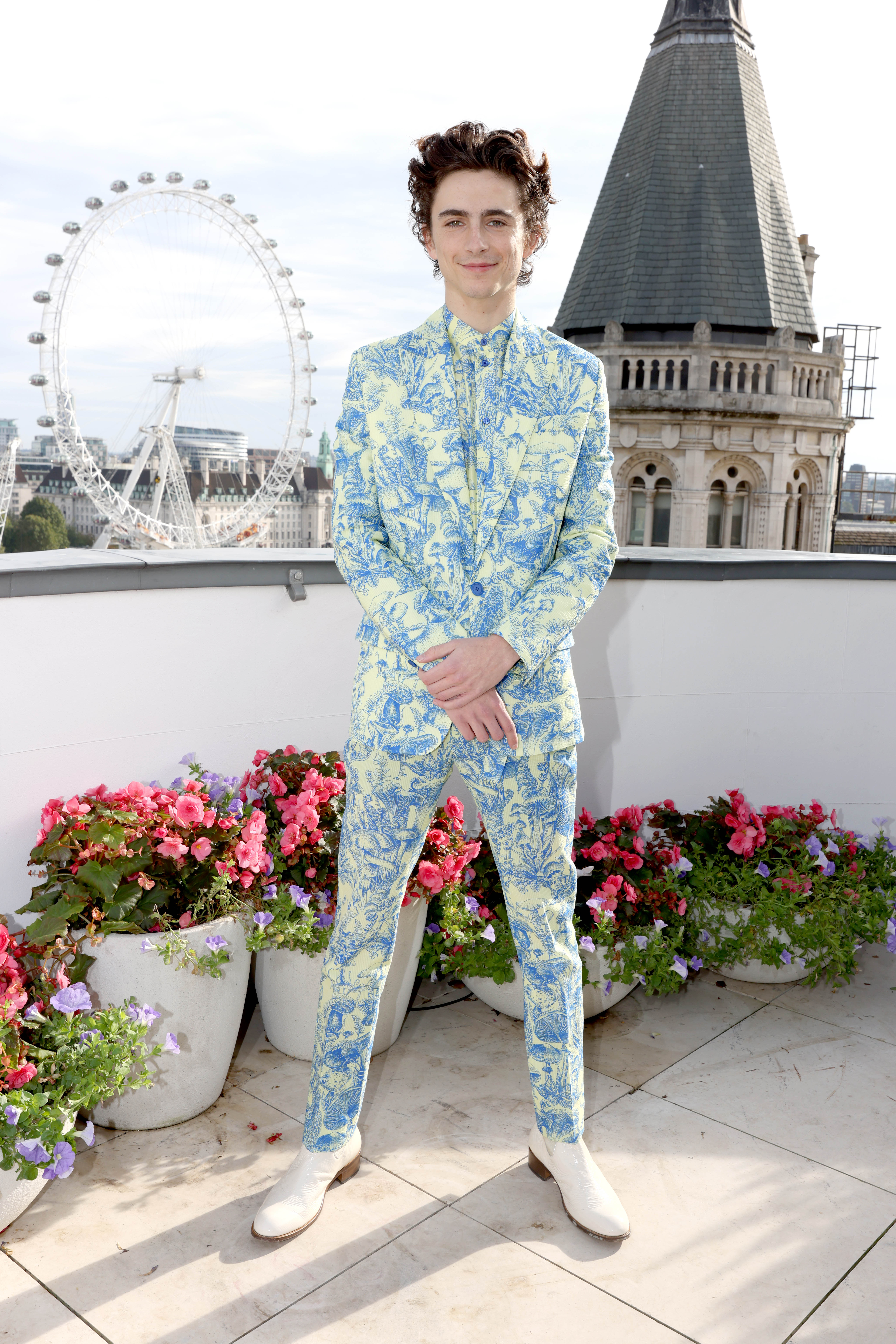 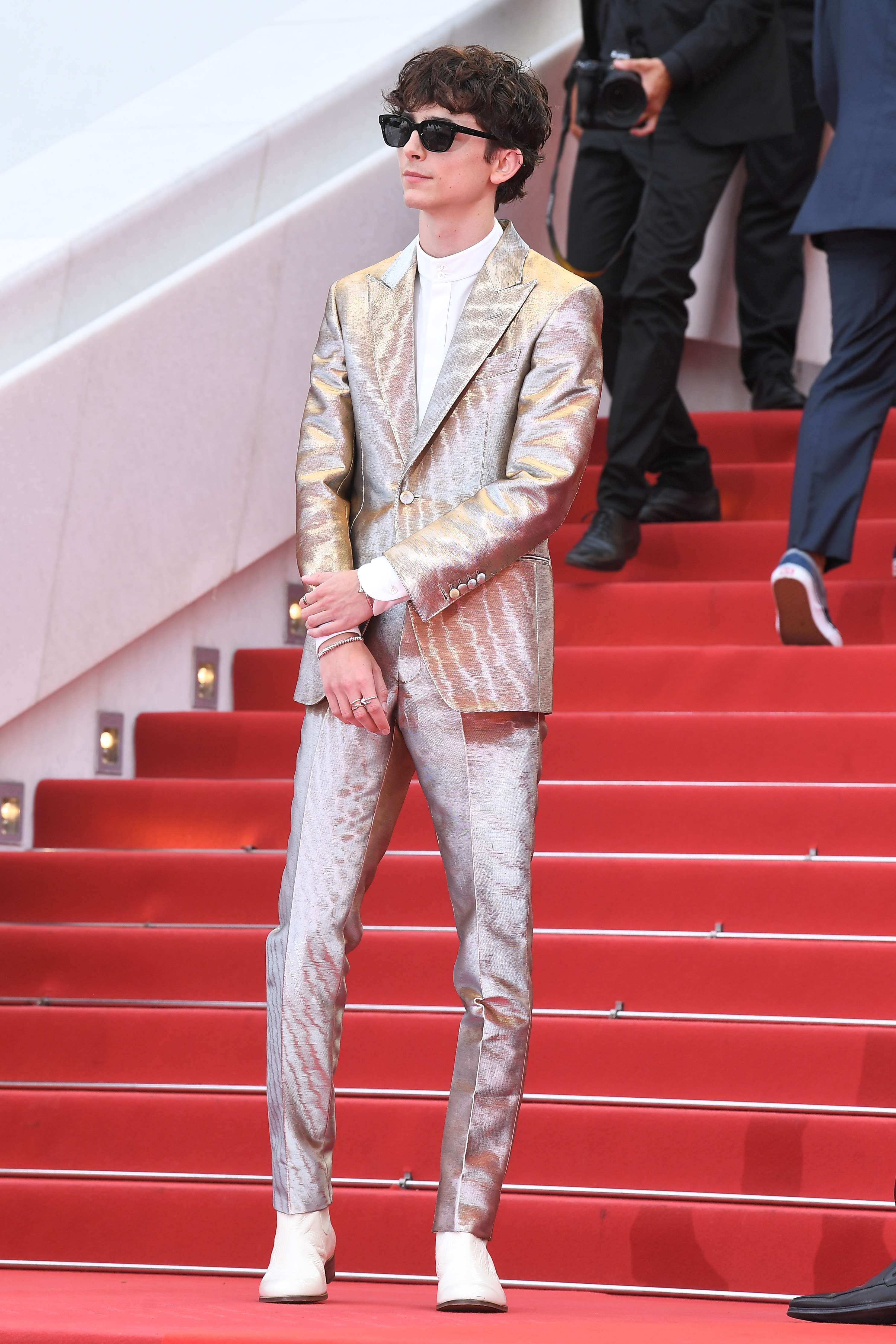 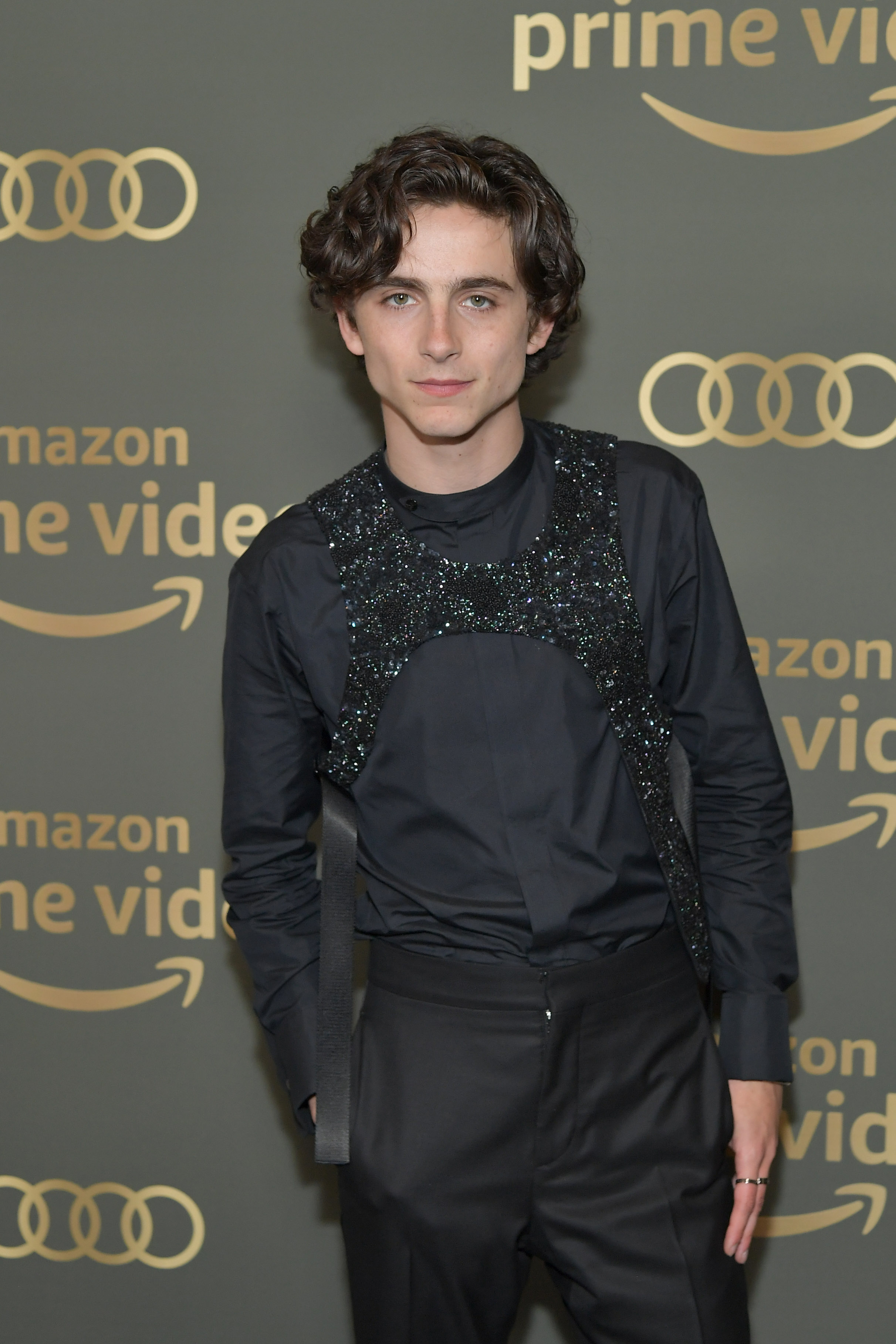 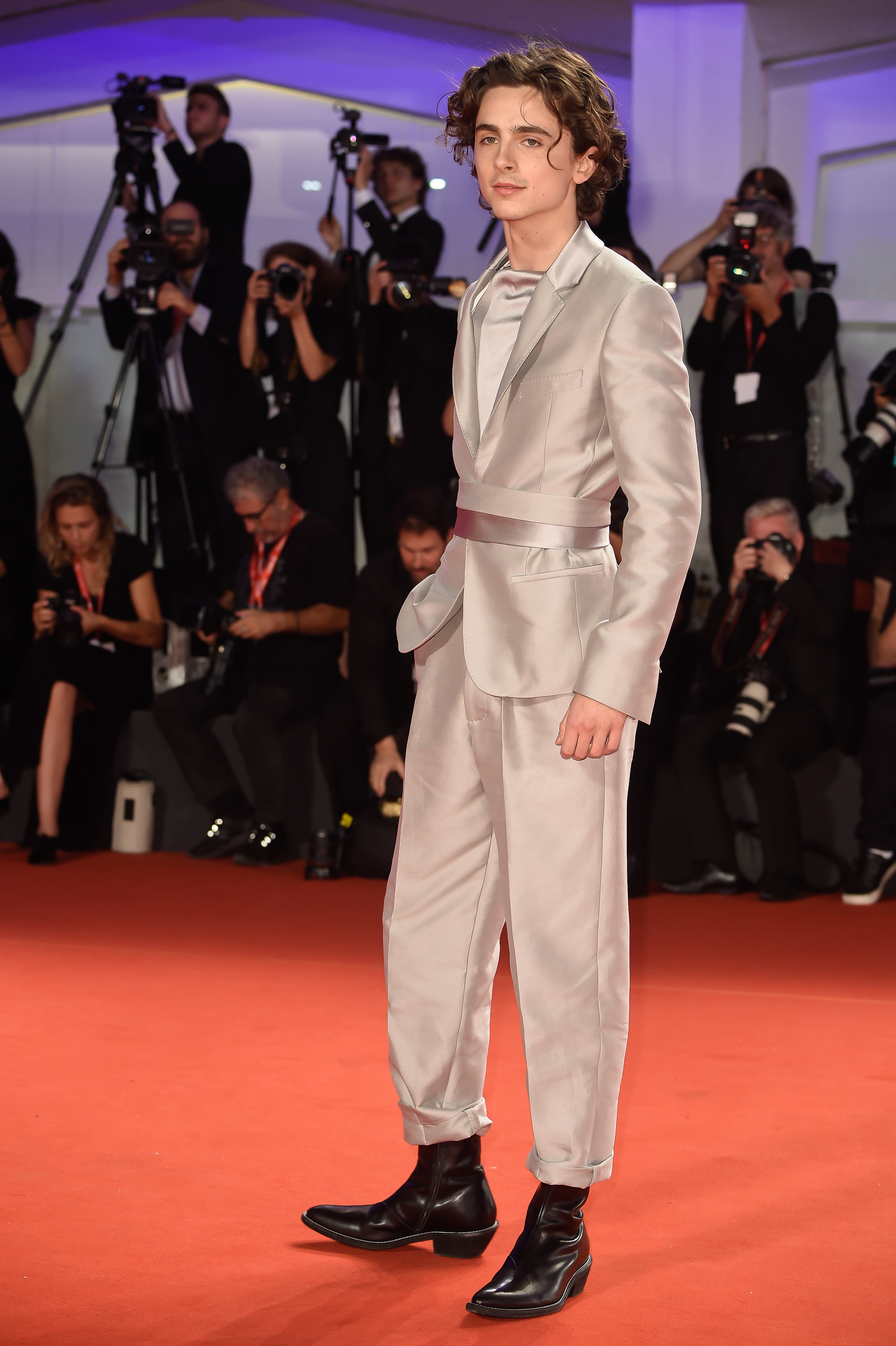 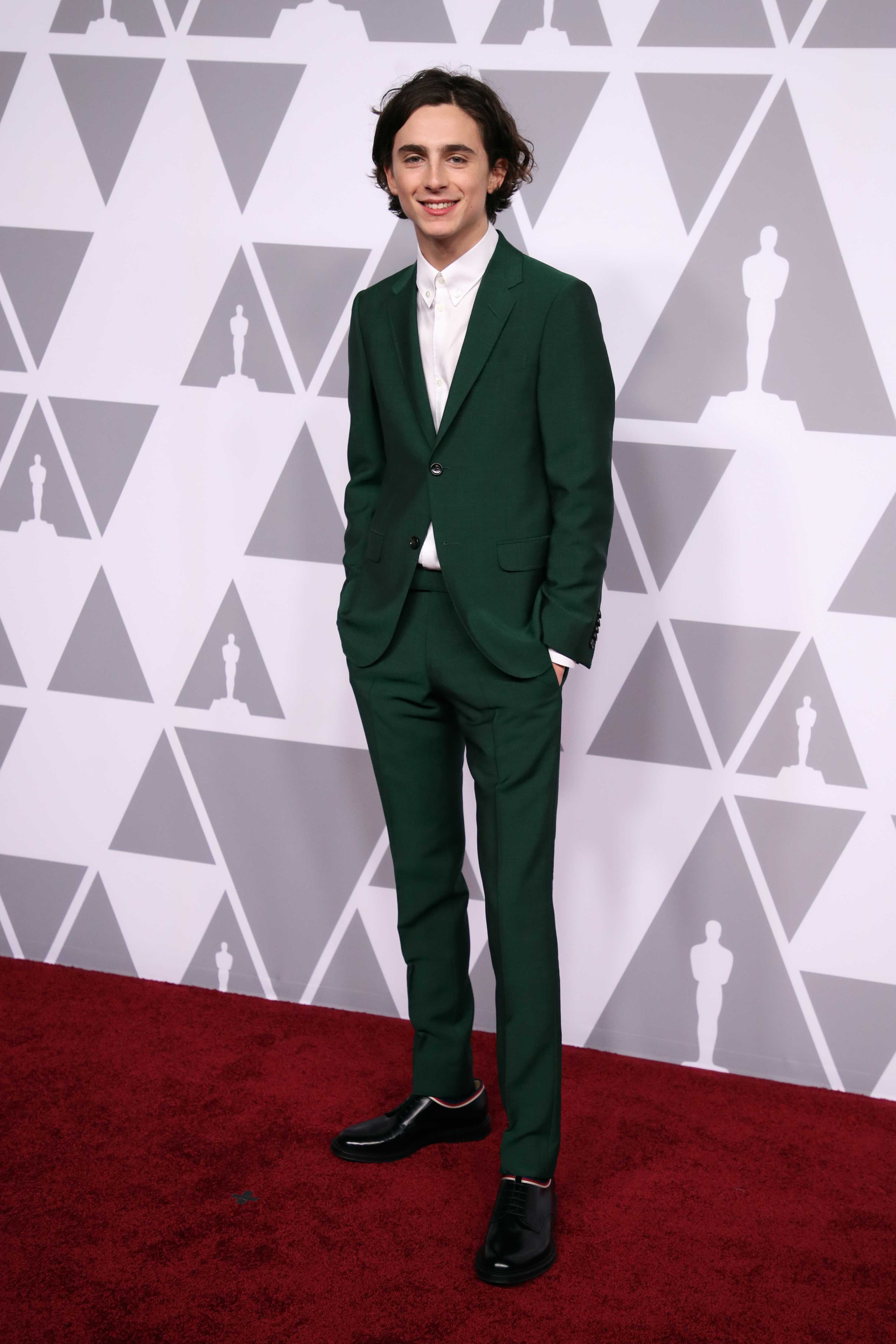 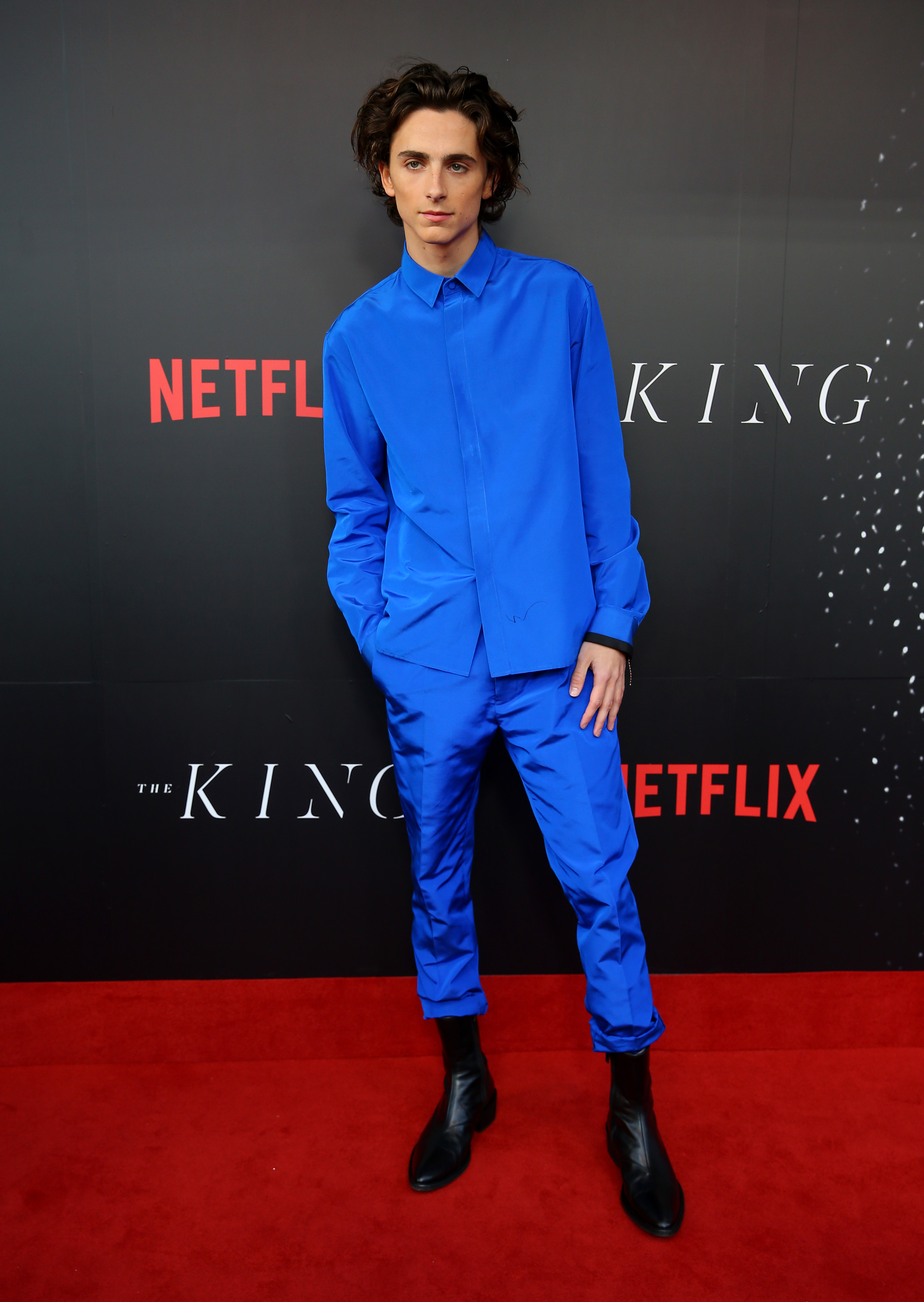 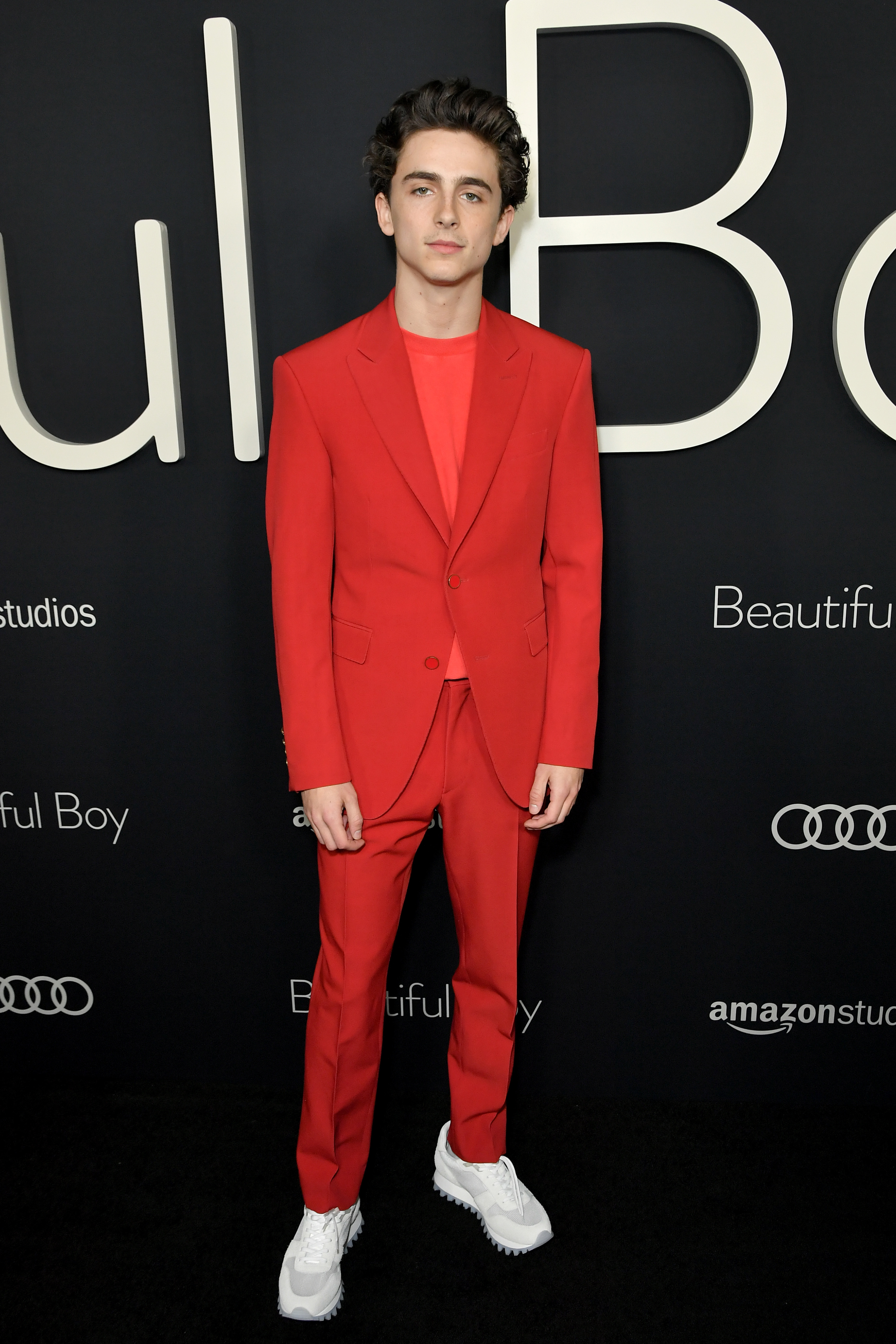 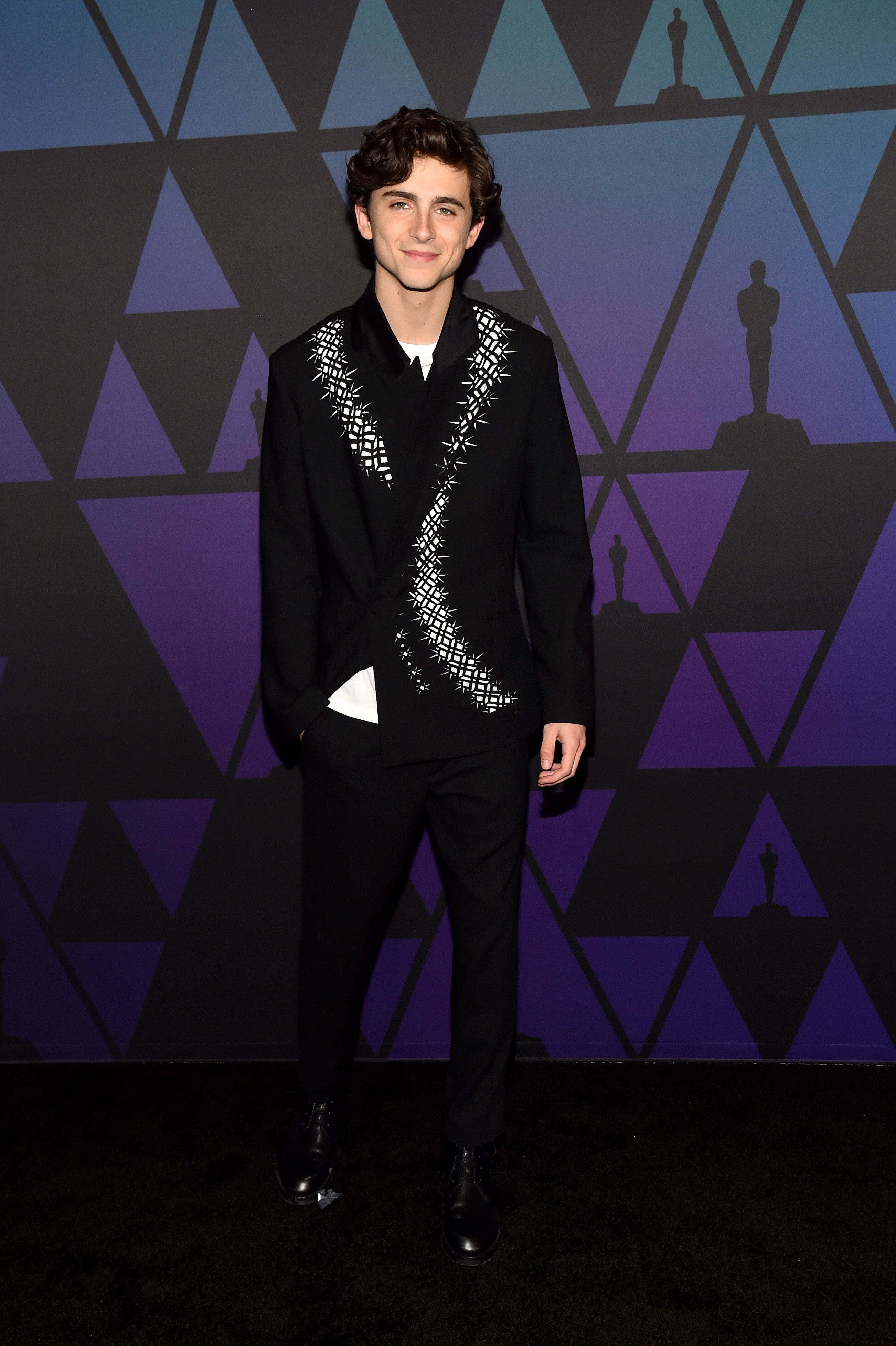 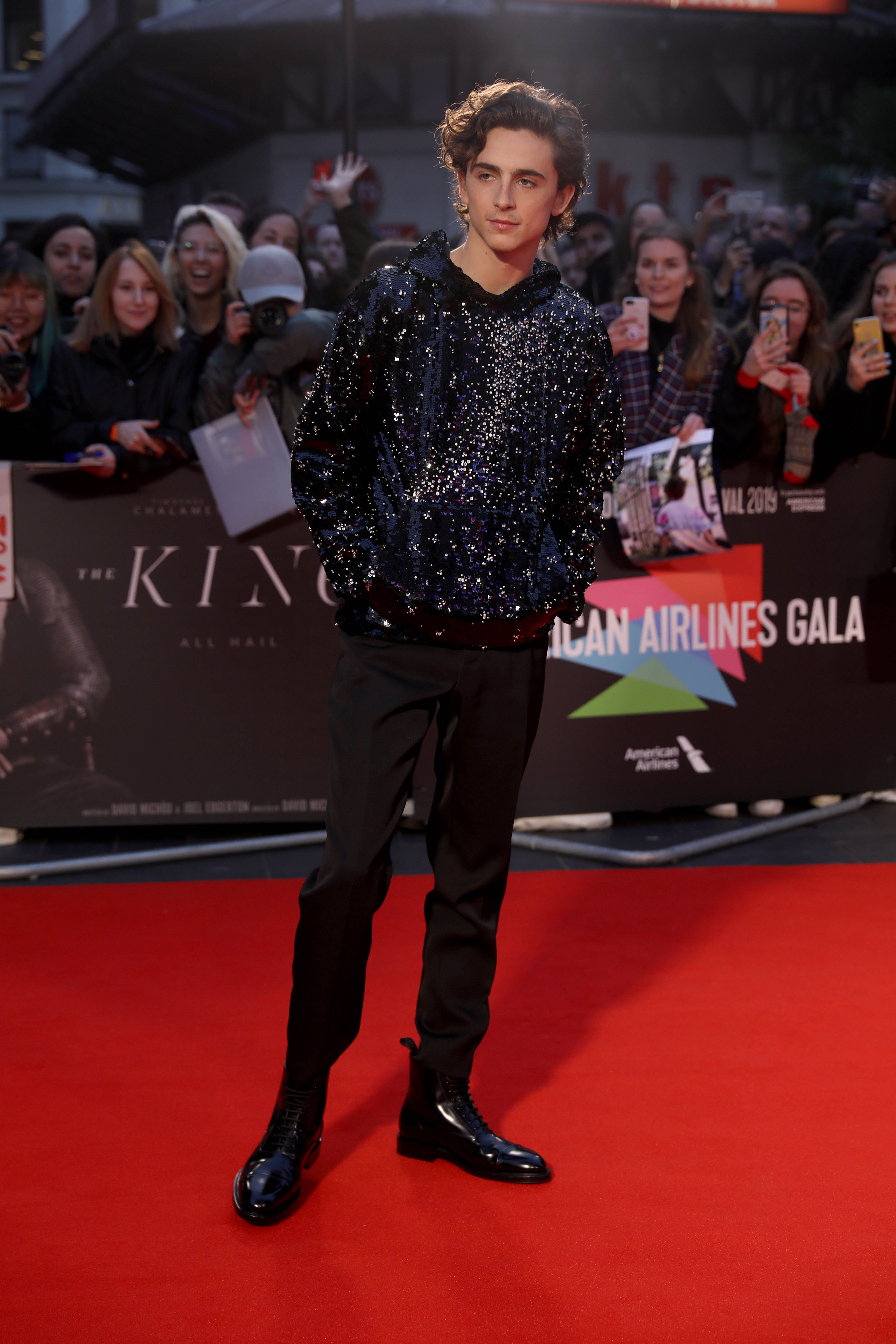 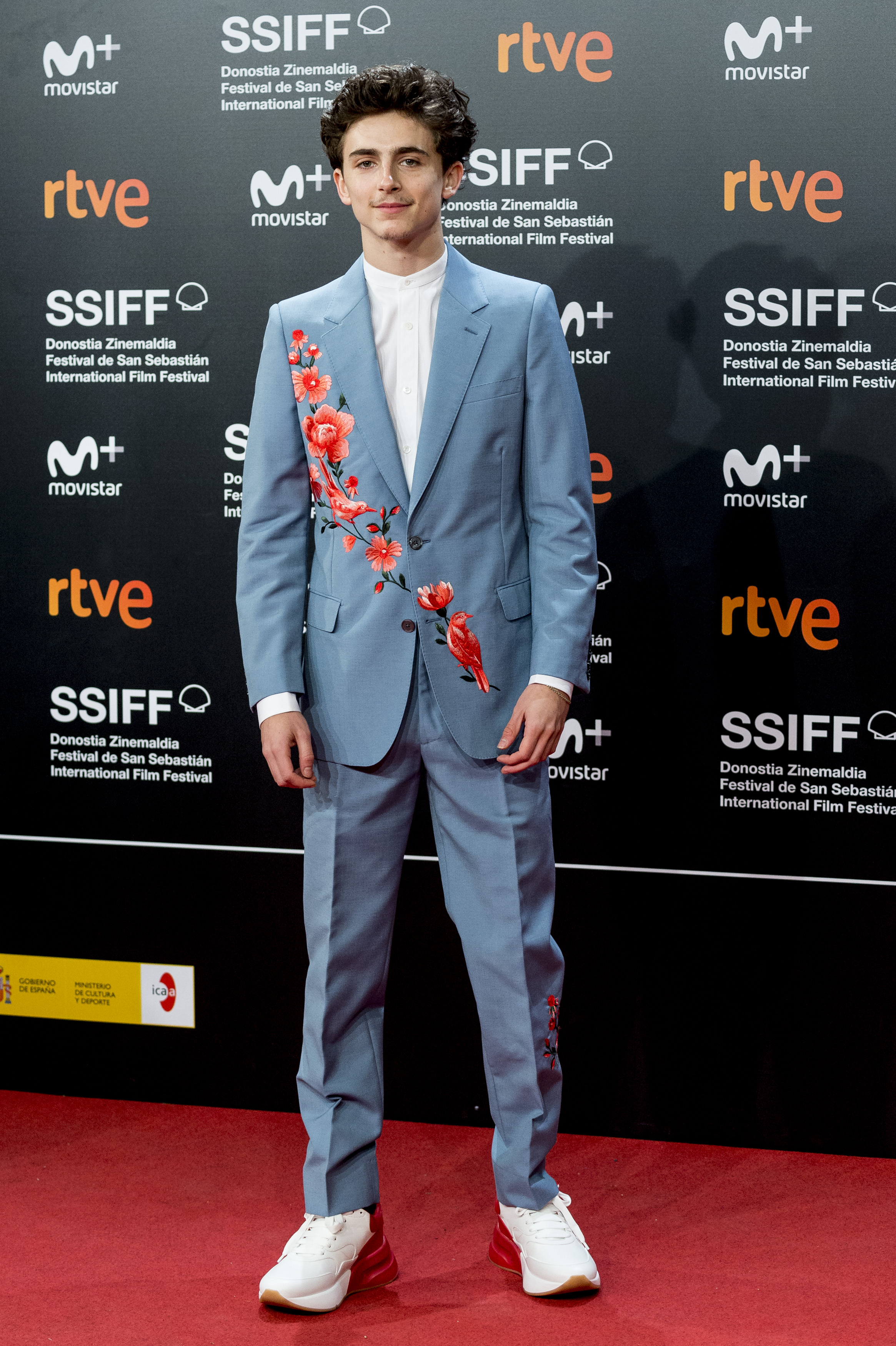 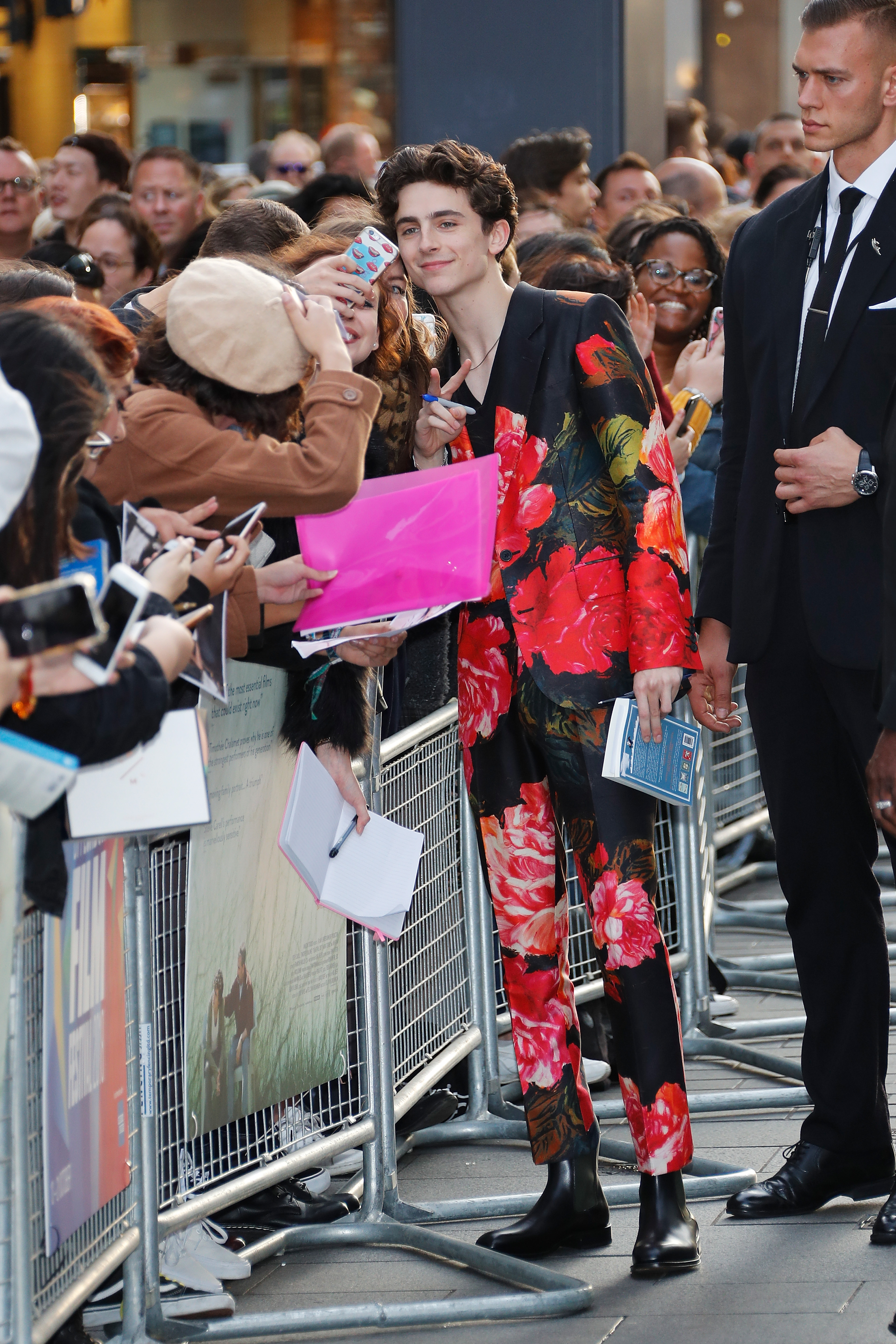 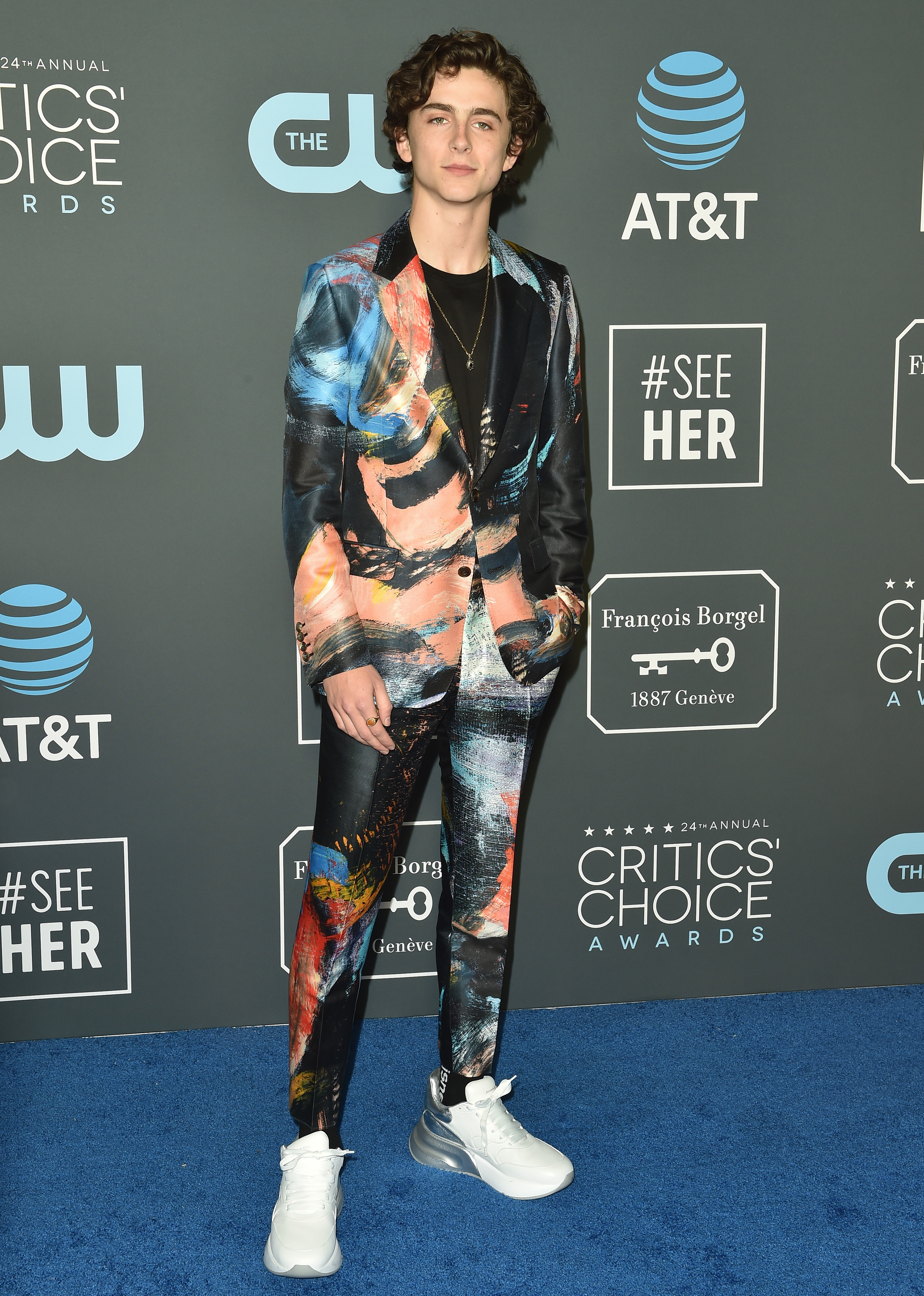 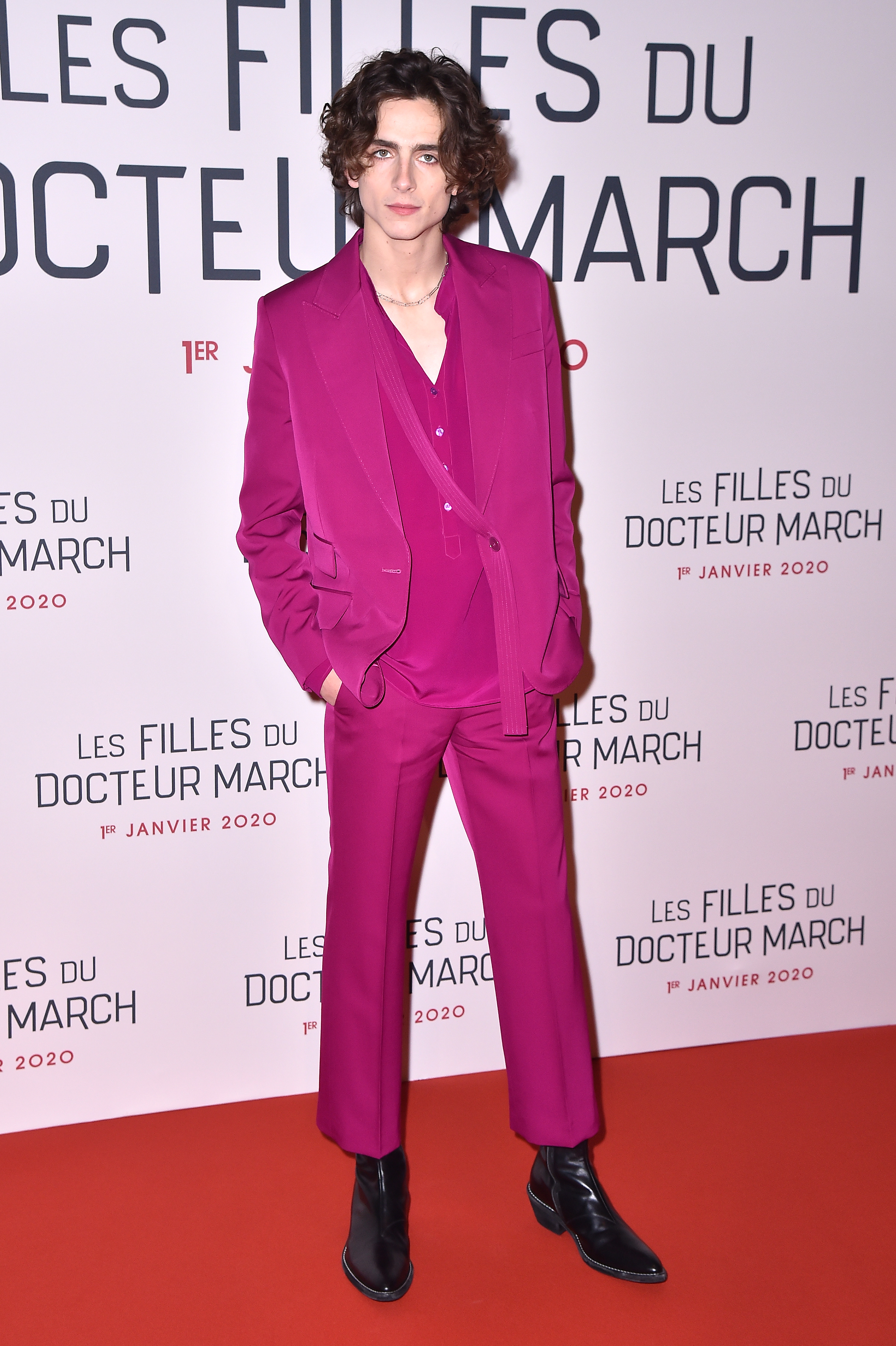 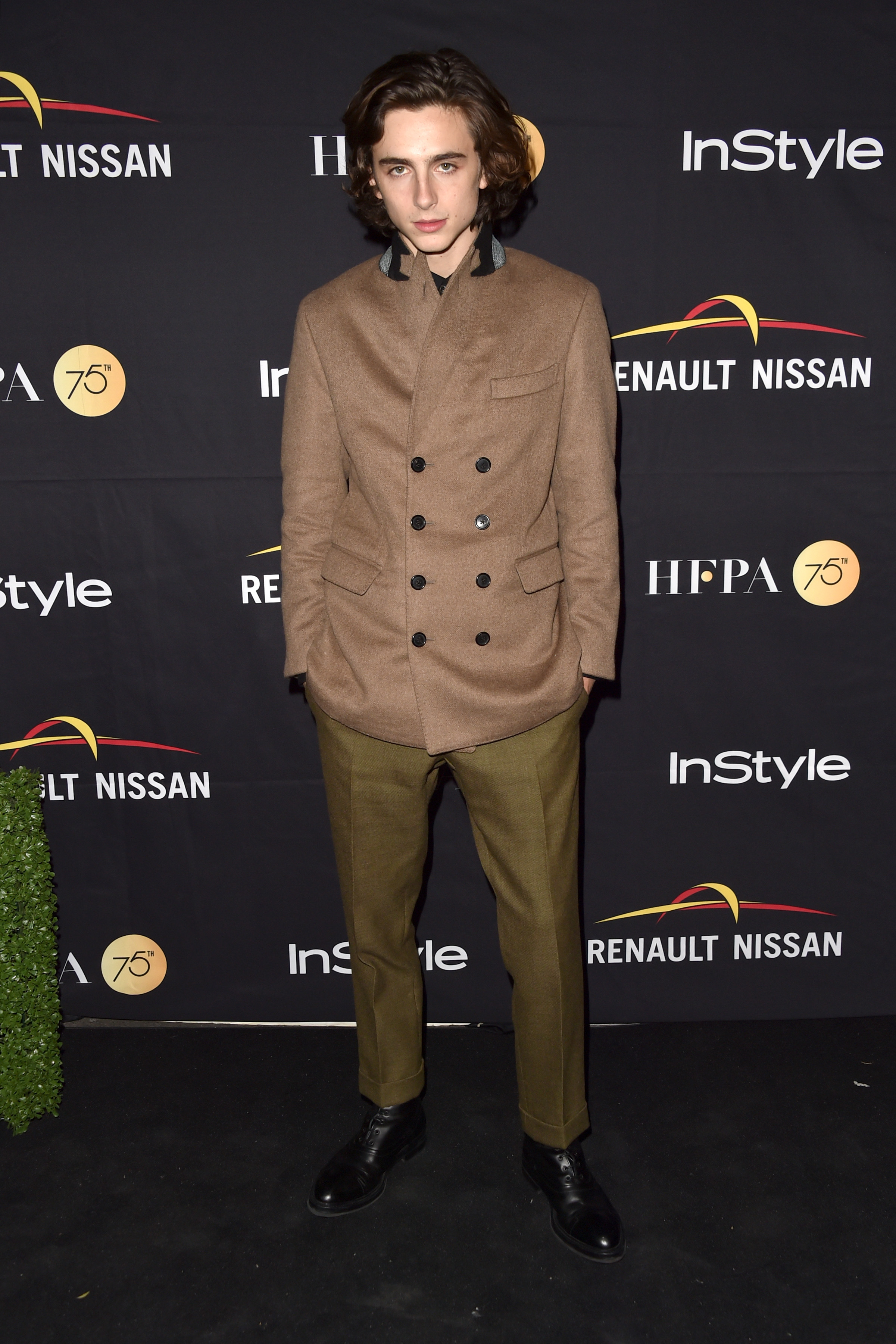 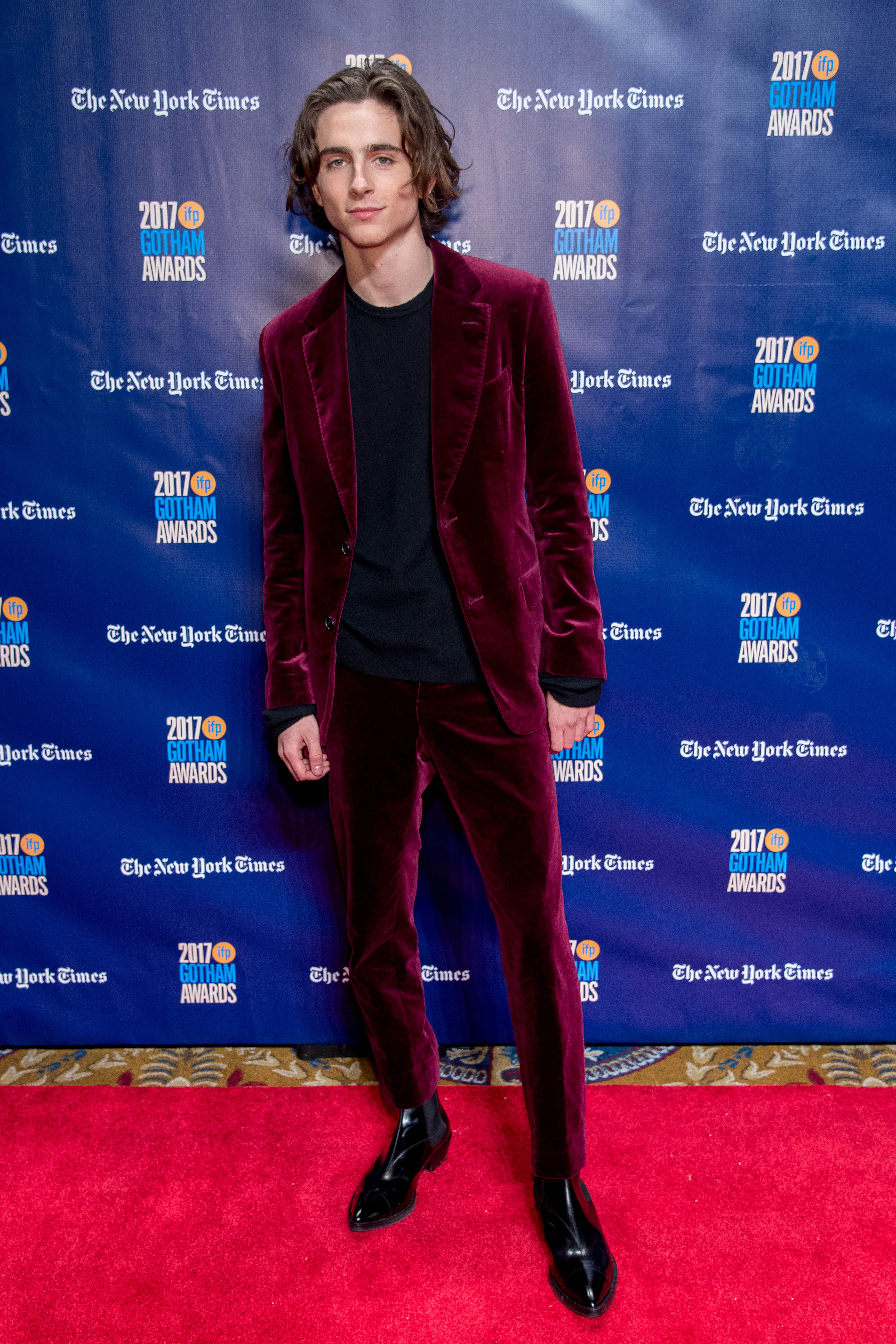 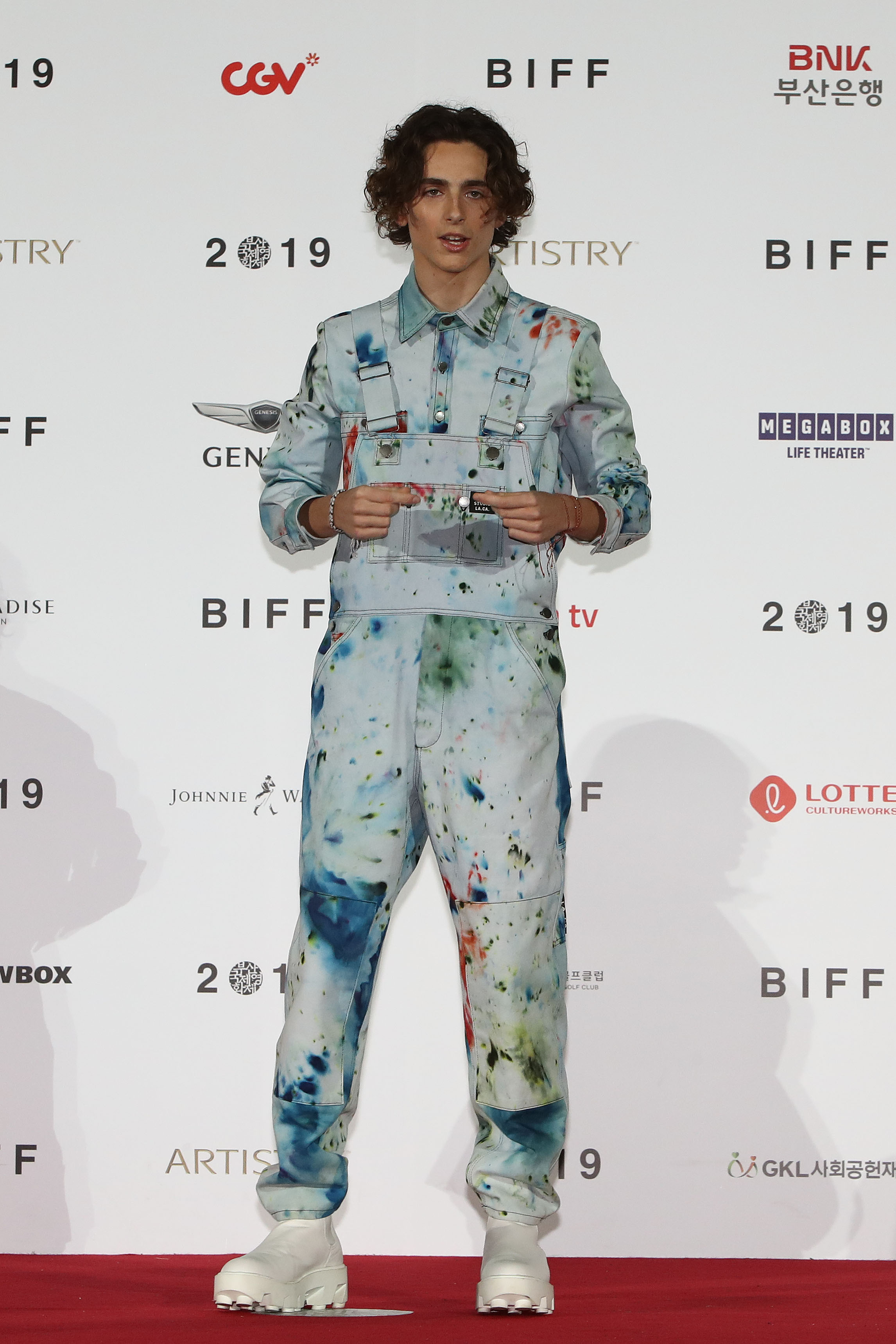 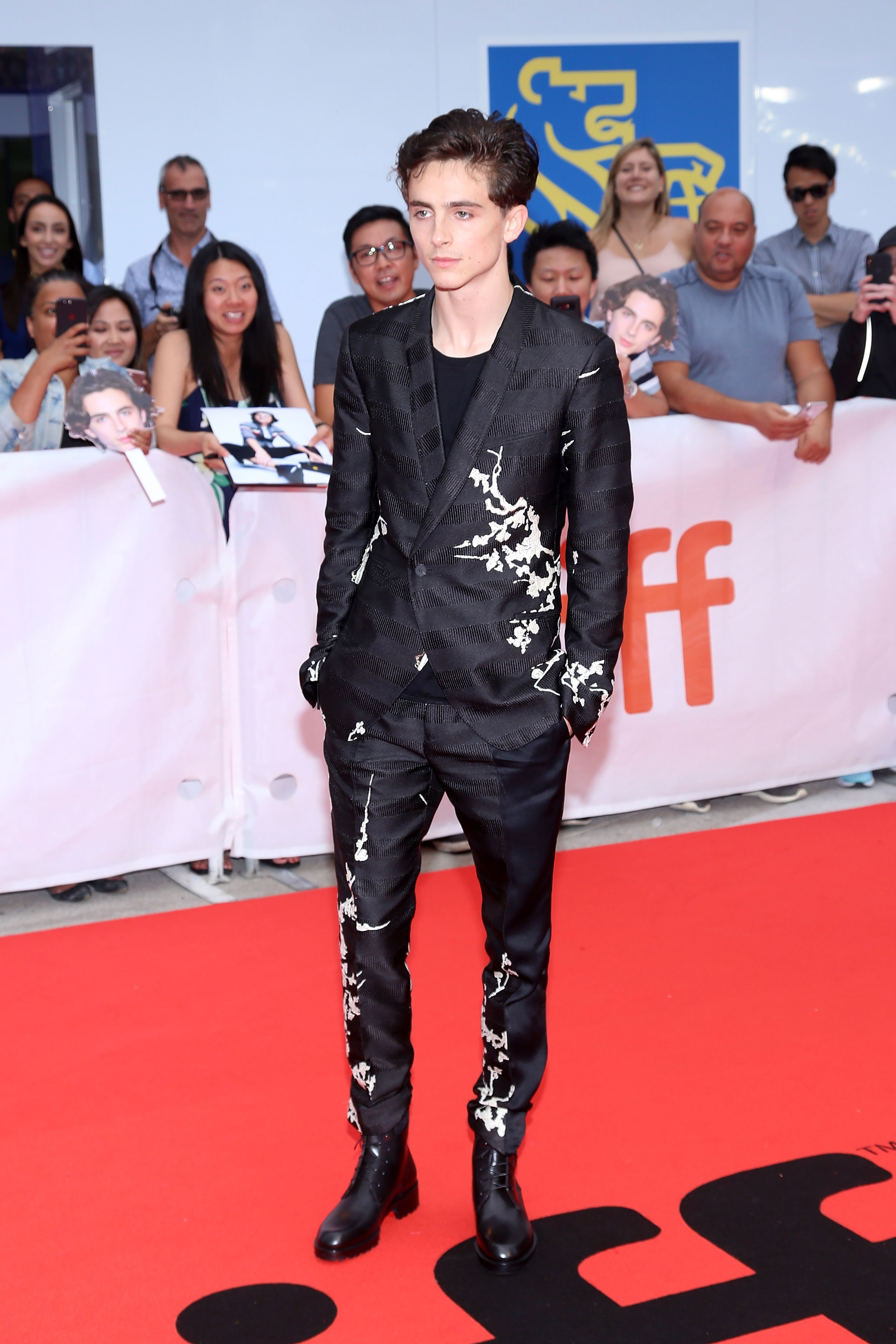 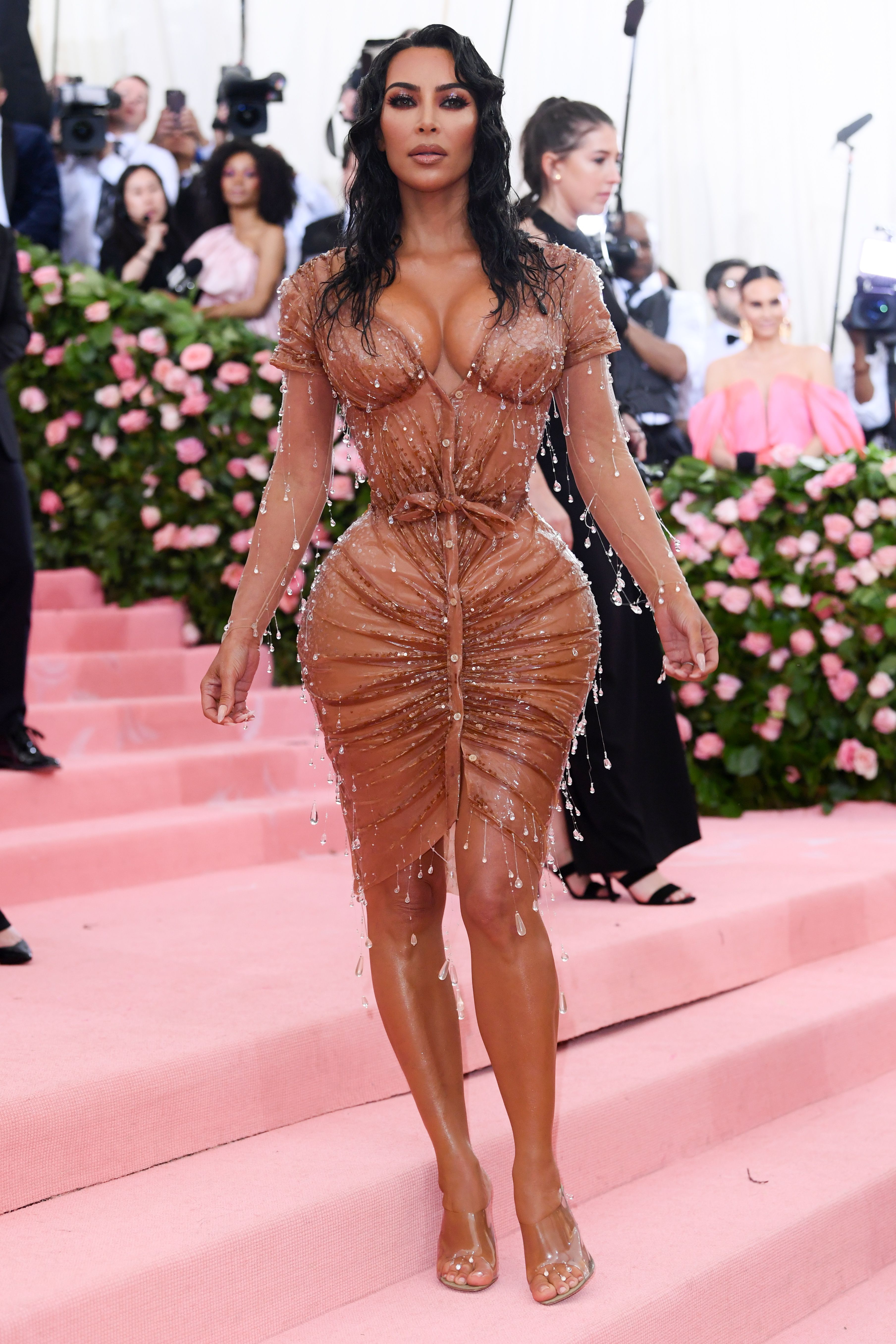