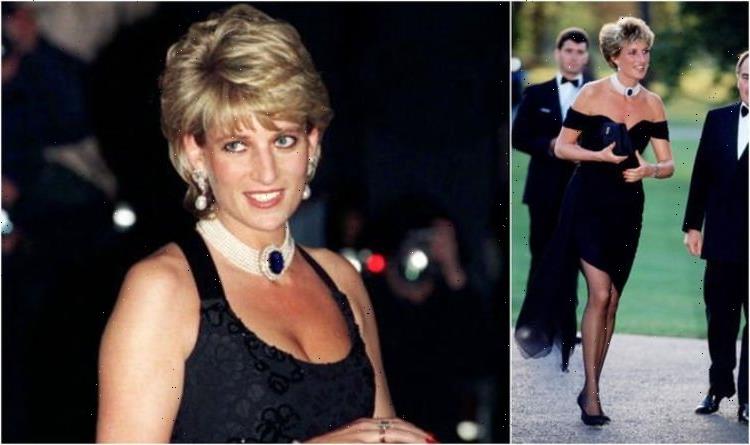 As well as beautiful tiaras and necklaces, the Princess of Wales wore fabulous dresses during her 16 years in the public eye. One of the most memorable outfits the Princess ever wore was her so-called ‘revenge dress’. Princess Diana’s revenge dress, which she wore in 1994 after Prince Charles admitted to being unfaithful on national television, still makes headlines around the world to this day, 27 years later.

The tight-fitting little black dress looked sensational on the Princess of Wales.

The ‘revenge dress’ took the world by storm this week as Season 5 of the Netflix period drama ‘The Crown’ is set to unveil the dramatic events that led to the separation of Prince Charles and Princess Diana.

The ‘revenge dress’ was no doubt a huge statement from Princess Diana at the time,

However, jewellery experts at Steven Stone could not help investigating the story behind the incredible necklace she wore with it.

According to the experts, the sapphire on the necklace was originally part of a brooch.

This brooch was gifted to Diana from the Queen Mother on her wedding day to Prince Charles in 1981.

In ‘The Royal Jewels’, fashion historian Suzy Menkes described the piece: “The Queen Mother’s wedding present to Diana was a duck egg of a sapphire, surrounded by a double row of diamonds and mounted as a brooch.”

One of Diana’s first public appearances in the jewels came in February 1982, when she wore the brooch pinned to the lace trim of her Belleville Sassoon dress for a dinner at 11 Downing Street in honour of the British Film Institute.

According to the experts, it looks to be around 70 carats.

This is over five times the size of the stone in Diana’s engagement ring.

In true Diana style, she redesigned the diamond-and-sapphire brooch as a centrepiece of this incredible seven-strand pearl necklace.

Diana was not a frequent brooch-wearer, so it makes sense the sapphire and diamond cluster was adapted so that it could be worn as the clasp of a seven-stranded pearl choker necklace.

Considering the size of the stone and the legacy of Diana, this necklace could now be worth up to £100million.

This would make it one of the most expensive pieces of royal jewellery around today.

Sapphire’s have reportedly been used to protect against negative energies, as well as calm the mind, strengthen intuition, and invite spiritual clarity.

Perhaps this is why Diana wore the piece with her ‘revenge dress’ that day.

Leading diamond expert, Maxwell Stone, told Express.co.uk: “Princess Diana was a clear fan of sapphires, however, this stone is in a league of its own.

“Looking at images of the huge stone, it looks as though it’s around 70 carats, maybe even more.

“This is probably one of the most expensive jewels from the entire royal collection.”

The royal is now married to Camilla, The Duchess of Cornwall and is the oldest heir apparent in history.