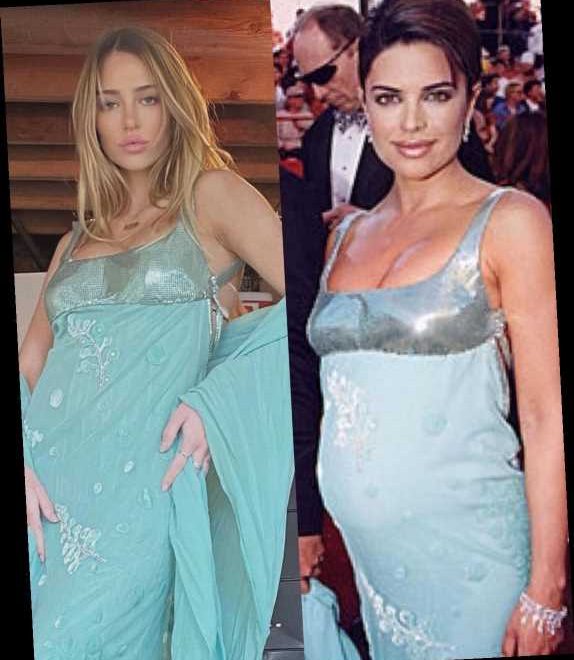 Amelia Gray Hamlin made headlines earlier this week when she re-wore her mom Lisa Rinna's vintage Alaïa dress, and now, it's her older sister Delilah Belle Hamlin's turn to raid their mom's closet.

On Thursday, Delilah Belle, 22, posted a photo of herself posing in the turquoise Versace gown Rinna, 57, wore to the 1998 Oscars on her Instagram Story. "Got to try on mama's vintage versace that she wore while pregnant with me," the model captioned the shot.

The Real Housewives of Beverly Hills star later shared a side-by-side photo of the duo on her own Instagram account, writing, "I was 6 1/2 months pregnant with @delilahbelle we were going to the 1998 #Oscars and @phillipbloch had @versace make me this dress! Here Delilah wears the dress I was pregnant with her in! Can you Believe?!"

The empire waist Versace gown features a chainmail bodice and crystal embroidery throughout. When Rinna wore it on the red carpet, she rocked a pixie cut and metallic brown lipstick (quintessential '90 glam!), while Delilah paired the dress with natural waves and a fresh face. Rinna's famous friends felt sentimental about the mother-daughter twinning moment — Kelly Ripa wrote, "I'm not crying, you're crying 😭" in the comment section and her RHOBH costar Dorit Kemsley added, "It's so good it hurts! 😭"

On Wednesday, Amelia Gray, 19, posted a photo to her Instagram Stories of herself wearing a vintage Alaïa dress next to her mom, Lisa Rinna, also wearing the outfit nearly 15 years ago.

"My queen @lisarinna gave me one of her vintage dresses," she wrote over the side-by-side photo.

Rinna wore the designer gown to several red carpets throughout the '90s and early 2000s, including in the picture Gray posted of a red carpet for the Race To Erase MS gala in 2005.