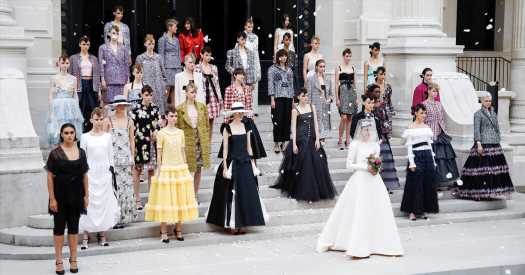 PARIS — For years the Chanel show was the biggest, most famous, most showy show in Paris.

Guests would throng the steps of the Grand Palais, where it was traditionally held, decked out in their double-C finery (bags and boots and brooches), seeding selfies like ginkgo trees across their Instagram feeds. It would be impossible not to know it was Chanel day, whether or not you were in Paris, whether or not you had any interest in fashion shows. It elevated the brand to pop culture-event-level status.

That was when Karl Lagerfeld was the designer, and he reveled in building evermore snappable (or Snap-able) sets: airports and supermarkets and brasseries and even a beach with actual waves. Once he set off a rocket ship. If the backdrops overshadowed his collections and sometimes seemed a wee bit profligate, given the ephemerality of the event — if they felt as much like sleight of hand as creativity — hey: the whole experience was so fashion fabulous, it was practically the definition of the phrase.

Not any more. That’s not a bad thing.

Ever since his death in 2019, Mr. Lagerfeld’s successor, Virginie Viard, has been pulling back from the decoration (of the space, to be fair, not the clothes). This season she washed the slate clean altogether: moving the show from the Grand Palais to the small, circular internal courtyard of the Palais Galliera, the Parisian fashion museum that is hosting the first retrospective of Gabriel Chanel’s work ever held in Paris and that Chanel (the brand) has helped to underwrite and expand.

There was not an ersatz construction on view — just some chairs, arrayed around the edges of the entrance, as if to say: The money has gone into this cultural landmark now. Welcome to the new world. It’s a different place.

Well, who can’t relate to that these days? 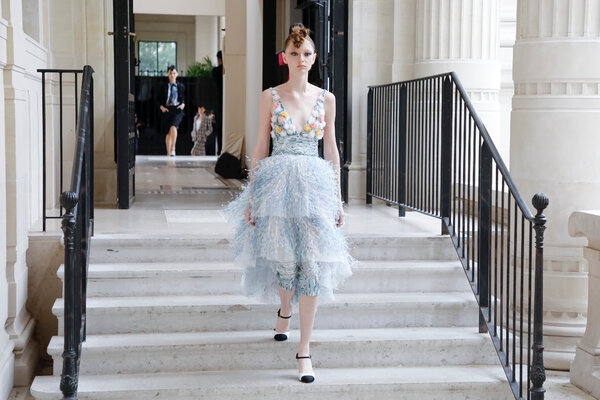 It was a smart update, given the tenor of the times. And it’s not the only way Ms. Viard is trying to make the brand modern. Though it may be the most clearly successful one.

There was a lot about her couture collection that felt familiar in a good way, especially the lovely black and white garden-party-at-Giverny evening wear. And the extraordinary technique that goes into the famous atelier’s creations, with the brand’s signature bouclé recreated in sparkling trompe l’oeil Lesage embroidery and an entire garden of minute blooms that encrusted an empire waist tunic dress.

But this time around the cocktail dresses (and their pastel lingerie versions) also came with matching encrusted knickerbockers — like leggings, the couture version. And the suits had an oversize 1980s boxiness that made them look heavy even when they were not, and were paired with … belly-button-baring broderie anglaise bustiers and boob tubes. It was as if Gen Z had gone rustling in their old auntie’s closet and decided to mix ’n’ match with their own wardrobe. Only the combination didn’t look fresh, but forced.

At the end of the show, after a stately parade around the courtyard, the bride — Margaret Qualley, actor and daughter of Andie MacDowell, in an elegantly simple shell-pink wedding gown — tossed her bouquet over her head and it landed in the lap of Laura Brown, the editor of InStyle, who burst out laughing. Sometimes, relevance is just a gesture.

Sometimes, it’s revisiting what you know best. Last season Giorgio Armani, like all designers, had a virtual Privé show, so this season he decided to bring back some of his favorite pieces from that collection and sprinkle them throughout this one.

Pants (there were a lot of pants) came in liquid silk organza, as slick and shiny as mercury, often gathered at the ankle; shown either with easy jackets or increasingly elaborate evening tops, feathered and beaded and once draped in a pearl net. Colors were watery and holographic or chemically sweet. Gowns bristled with frills.

What was old(ish) and what was new? It was impossible to tell. Remember that phrase “so last season?” He made it so last season.

Which is really very this season, when you think about it.