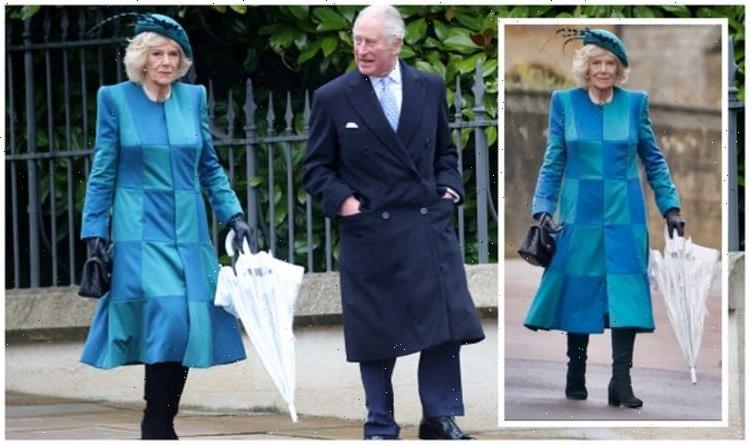 Prince Charles and Camilla arrive at church on Christmas Day

Camilla and Prince Charles were joined at the chapel in the grounds of Windsor Castle by the Earl and Countess of Wessex and the Duke and Duchess of Gloucester. Camilla, dressed in a blue and turquoise chequered jacket and matching hat, wished a “Happy Christmas” to members of the press as the couple walked to the chapel.

Royal fans were certainly impressed with the Duchess of Cornwall’s choice of outfit.

Pennington Legh added: “Looks lovely. So proud of her.”

Meanwhile some royal fans were not sure what to make from Camilla’s dress.

Royal fan Rebecca Marsh said: “She stands out from the crowd, that’s for sure!”

Similarly to the Countess of Wessex, Camilla accessorised with a beret hat that matched her turquoise coloured dress-coat.

She also wore some black leather gloves, a black patent handbag and some black boots perfect for the winter weather.

Her bag appeared to be from the Queen’s favourite brand, Launer London, which costs around £1,030.

The Duchess was wearing a three-strand pearl necklace which worked very well with Camilla’s attire.

The weather in Windsor was raining so Camilla also had a transparent umbrella to hand.

The Queen’s notable absence from the service is a personal choice and follows a precautionary approach seen over the last six months.

Sophie and Edward were accompanied by their daughter Lady Louise, 18, and son James, Viscount Severn, 14.

The royals were greeted at the entrance by the Dean of Windsor before moving inside for the morning service.

The service, which is ticketed, was attended by residents of the Windsor estate and members of the chapel congregation.

The Queen is expected to be joined at Windsor Castle on Christmas Day by Charles and Camilla.

She cancelled her usual trip to Sandringham as a “precautionary” measure amid rising coronavirus cases.

The Sun reported she will be joined by 20 family members in all, including the Duke of York and his daughters Princess Beatrice and Princess Eugenie, Edward and Sophie, and five of her great-grandchildren.

This is the 95-year-old monarch’s first festive period without the Duke of Edinburgh, who died aged 99 in April.