Cardi B was a vision as she accepted the ‘Style Influencer of the Year’ award at the 2020 Footwear News Achievement Awards! The rapper looked radiant in a dress with feather installations.

Cardi B showed up and showed out at the Footwear News Achievement Awards on December 8. The Grammy-winning rapper, 28, dressed her incredible curves in a black dress from which artsy black feathers sprouted as she accepted the “Style Influencer of the Year” award for the 34th annual event. This year’s FNAAs will take place virtually (for the first time) due to the ongoing COVID-19 pandemic, which has either cancelled or postponed other big name events. 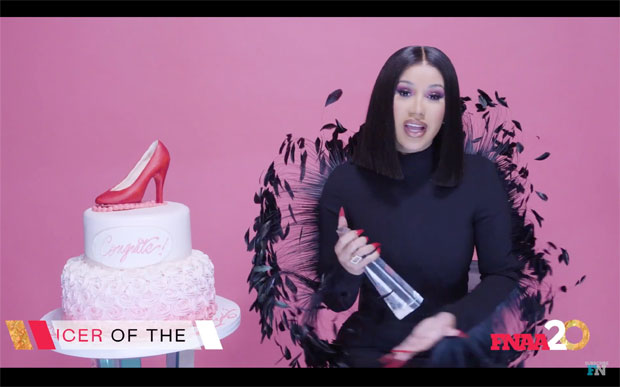 Cardi is no stranger to the Footwear News brand, which also happens to be a sister site to HollywoodLife. The mother of one covers the magazine’s December issue, which highlights her new Reebok sneaker collection, as well as her boundary-breaking shoes and fashion. During tonight’s show, renowned shoe designer, Christian Louboutin will present Cardi with FN’s Style Influencer of the Year award — which is sure to be a full circle moment for the hitmaker since she first rapped about red bottoms in her 2017 breakout hit, “Bodak Yellow.”

“Every time I go to a retail store, my first session is Louboutin,” Cardi told Footwear News ahead of the awards show, admitting, “I just love it. I feel so sexy. I made a song about it. It made me rich. Like, it’s the Louboutin — that’s the one I’m always going to go to,” she said about her go-to shoes. “I’ve always been into fashion. Back then, I couldn’t afford what I wanted and now I can.”

As for the designer, Louboutin admires Cardi’s overall boldness. “I’ve always liked people building their own identity from scratch, creating their own character without seeking any kind of approval,” he said, declaring, “Cardi B is one of them — a free spirit making things in her own way.”

“I’ve always liked people building their own identity from scratch, creating their own character without seeking any kind of approval,” designer Christian Louboutin told FN. “Cardi B is one of them — a free spirit making things in her own way.”

Other stars set to appear at the first-ever virtual FNAAs include John Legend, Priyanka Chopra-Jonas, Jason Momoa and many more. The annual show will bring together the biggest names in footwear, fashion and entertainment who have defined a year like no other. FN’s 2020 honorees include a mix hit makers, style icons, brand architects and executives who have overcome formidable challenges at a time when the pandemic has changed the landscape dramatically. Additionally, Birkenstock will receive the award for Brand of the Year as well as Crocs. New Balance will be honored with Athletic Brand of the Year and Alfredo will receive the award for Launch of the Year.

The first-ever virtual Footwear News Achievement Awards will take place on December 8 at 6 p.m. EST. The big night will kick off with a special red carpet pre-show at 5:45 p.m. ET. Viewers can tune into the red carpet and show on FootwearNews.com and YouTube, as well as highlights on FN’s Facebook, Twitter and Instagram Live platforms.