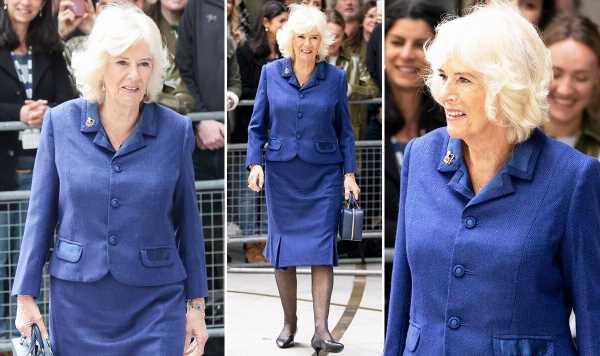 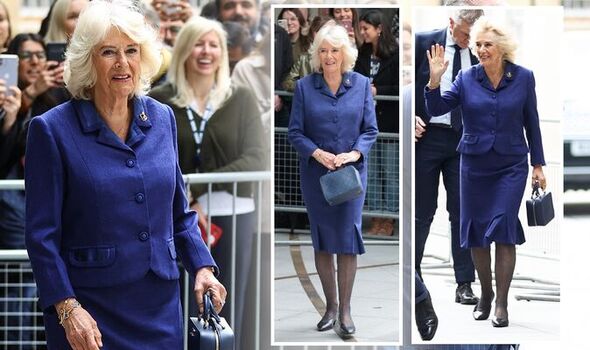 Camilla, 74, wore a very business like navy blue suit today to visit the BBC. She went with her husband Prince Charles to visit the broadcaster in its 90th year. The couple thanked staff and learned how they are continuing their operations across Ukraine, Russia and Afghanistan.

Camilla wore a blazer and skirt in navy blue and accessorised with a gold brooch in the shape of a crown.

Camilla accessorised with her blue Chanel AS1286 crossbody bag which she has worn a lot recently.

The royal accessorised with the bag at the Maundy Thursday church service two weeks ago and has worn it to royal engagements over the last few months.

The future King and Queen Consort were met by a group of adoring fans outside the BBC Broadcasting House in central London, where they headed to mark the 90th anniversary of the BBC World Service.

Prior to stepping inside the building, Charles and Camilla stopped to exchange a few words with members of the public lined up to catch a glimpse of them.

Camilla was all smiles as she donned her dark blue ensemble, paired with her Chanel tiny handbag and black heels.

The heir to the throne accessorised his striped blue suit with a turquoise tie bearing a white geometric design.

The royals visited the BBC to thank the staff at the broadcaster’s World Service for their work.

Charles and Camilla also heard how the reporters are continuing their operations across Ukraine, Russia and Afghanistan.

Though another royal watcher, @PivoineFlora said: “Check out her vintage Chanel! I’m so jealous!”

The royal spoke of the death of Sir David Amess MP – who had championed Southend acquiring city status for years – as an “attack on democracy” and likened it to Putin’s move against Ukraine.

On the following day, the Prince of Wales and the Duchess paid a visit to the Ukrainian Catholic Cathedral in London, where they met members of the Ukrainian community, volunteers supporting the humanitarian effort charity leaders.

In a heart-wrenching moment, Camilla was spotted hugging the wife of Ukraine’s Ambassador to the UK Vadym Prystaiko, telling her: “We are praying for you”.