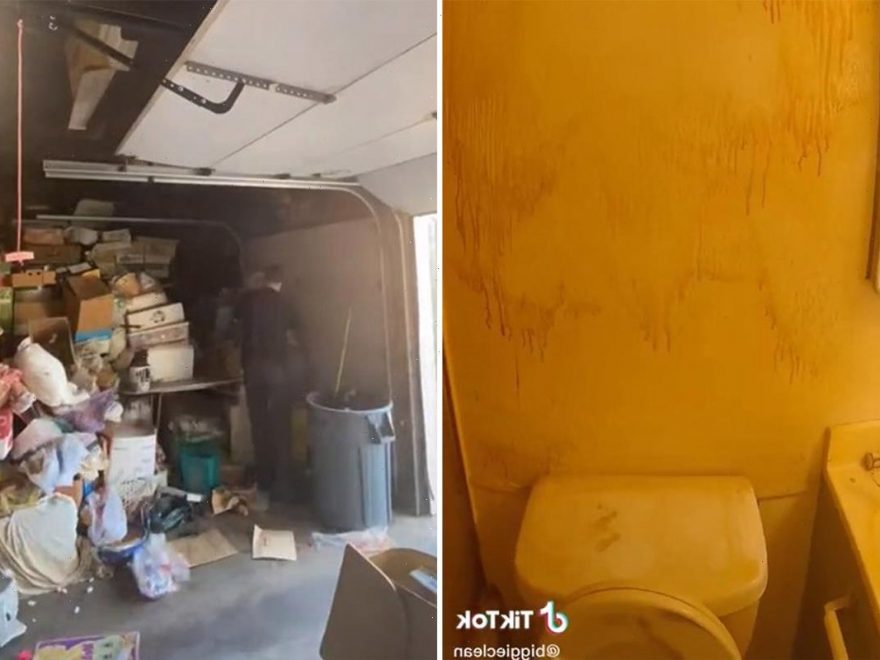 HAVE you ever wondered just how and who cleans up after a crime scene, or a hoarding family, or even someone who simply passed away in their home while living alone?

A biohazard cleaner has gone viral as he shows off the most disgusting jobs he’s had to do – from rotten freezers to homes of chain smokers and hoarders. 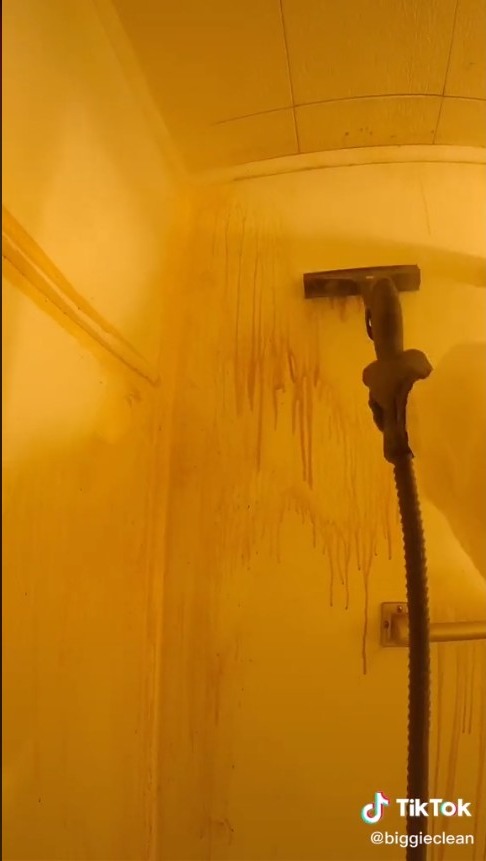 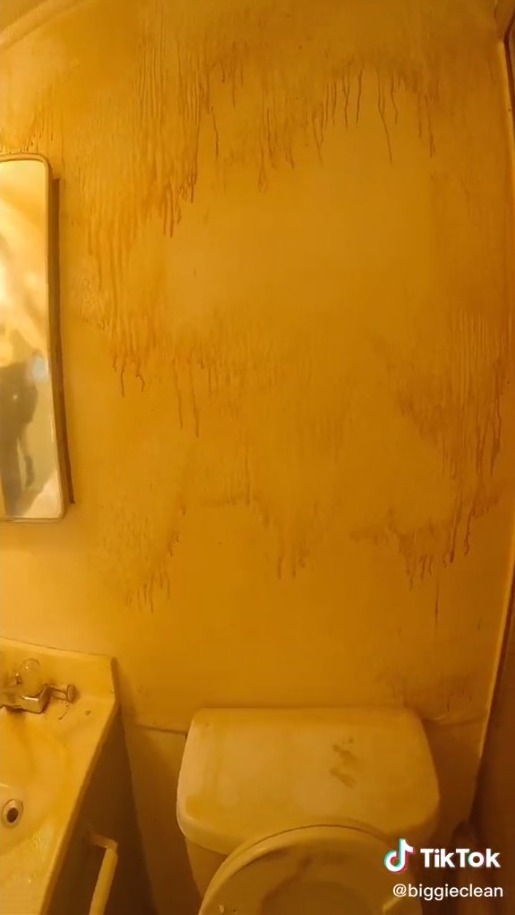 A company based in Beaverton, Oregon has been sharing some of their nastiest clean-ups as they clean up pretty much any messy situation that normal human beings couldn't handle.

Jacob Suarez, who runs their social media, admitted that although the job is tough, it gives him the opportunity to be graceful and compassionate with someone who might have a hoarding disorder or who might simply be going through a tough time.

In one of his earlier TikTok videos, Suarez showed how he and his mom cleaned 20-years worth of nicotine accumulation from a chain smoker.

The home appeared to be completely painted in yellow – but after using a steamer to loosen up the grime, Suarez showed that it was all smoke and dirt.

In the disturbing video, as he steamed the walls and even the ceiling, grime dripped down onto the floor before he cleaned it up with a wipe.

As a last attempt to get rid of the smell and discoloring of the walls, the cleaning company gave the home a coat of paint.

One of the most common cleaning jobs Suarez and his family do is hoarding control.

Whether they are called by landlords or the family of the hoarder, the company works together to basically throw everything that has accumulated over the years.

In this particular case, an elderly couple had accumulated so much in over 15 years that it was now a hazard to their well-being.

The couple's children had also come together to finally give their parents better quality of life.

"I still fear that I won't be able to get the job because it's overwhelming just how much stuff we have to throw away," he said in his latest video.

On this specific occasion, which Suarez called "the worst freezer we've ever done," someone had left meat and seafood to rot inside for more than ten years.

Upon opening the broken freezer, the biohazard cleaner was met with old and grime before uncovering rotten meat at the bottom.

He first took out the black water with a vacuum before scooping out the food and placing it inside layers and layers of plastic bags.

"Though I've never actually thrown up from a job before, this one made me take a step back to breathe before I yacked up everywhere," he admitted in the shocking video.

Unfortunately, one of the worst places for Suarez to clean is someone else's bathroom.

Usually, the bathrooms have either broken down, backed up, or simply been left covered in fecal matter as a way to get revenge on the landlord.

In one specifically gruesome scene, he and his team had to remove the toilet after it was deemed impossible to clean and disinfect due to the amount of fecal matter pretty much everywhere.

After removing the toilets, he cleaned up the rest of the bathroom which were left almost brand new.

He had to bring out his steamer once more to break up the grime in the bathtub.

Much to the dismay of the cleaning side of TikTok, he admitted that the cleaning products that his team uses are industrial-strength and unavailable to the people who love to disinfect toys in the dishwasher. 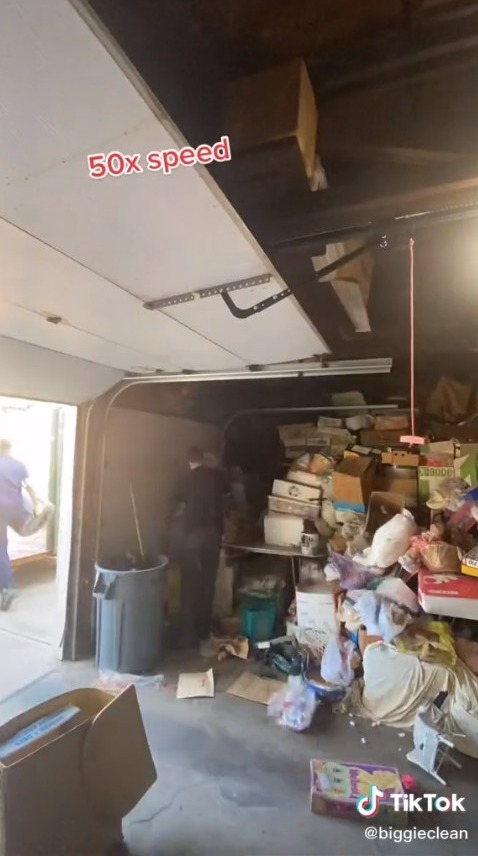 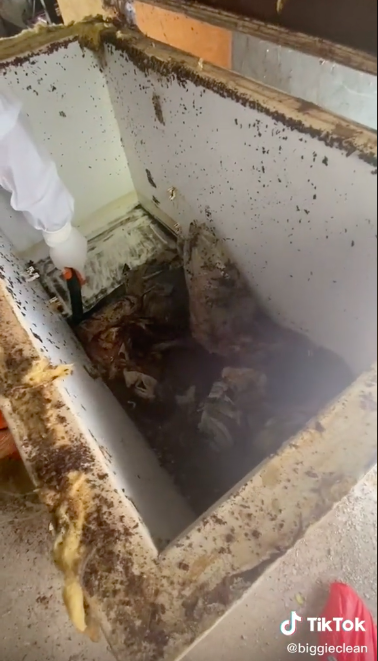 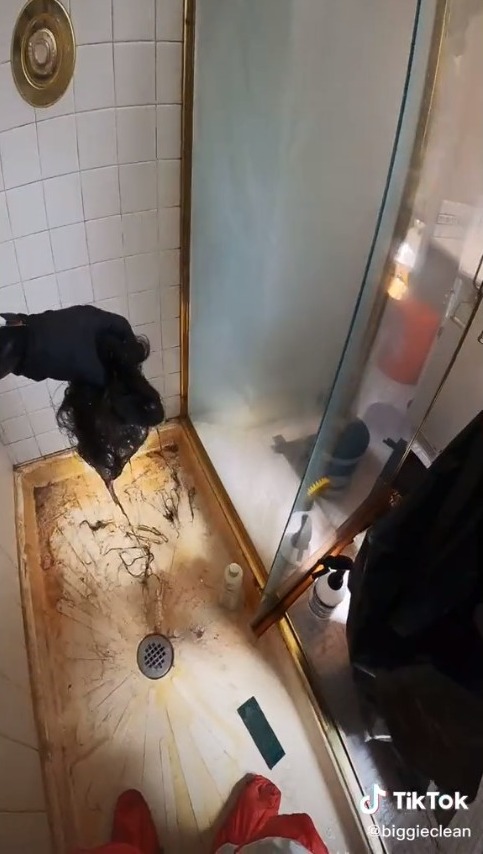