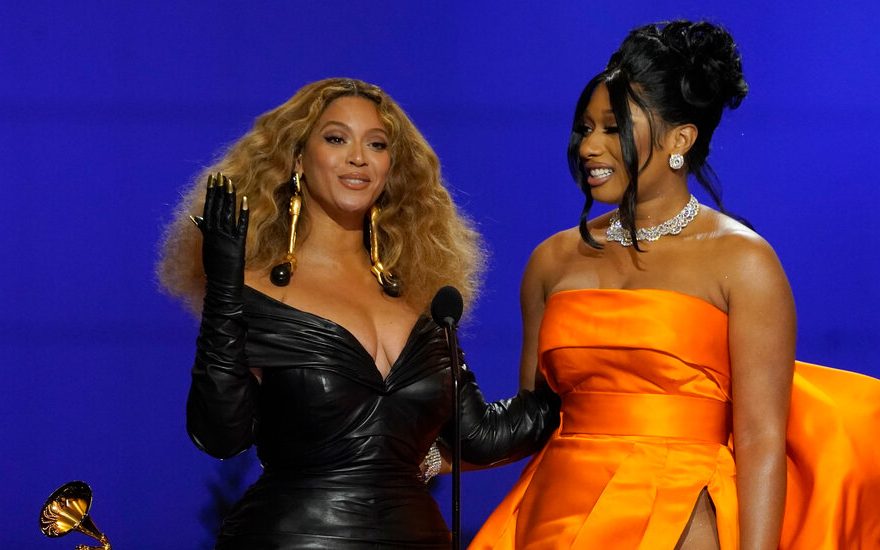 The evening she received her 28th Grammy and made history, Beyoncé didn’t even bother making an entrance at the annual music industry awards event, held outdoors this year in downtown Los Angeles. Rather, she simply materialized at one of the little round tables in front of the stage, sitting next to her husband, Jay-Z, and wearing off-the-shoulder black leather, a black mask and shades, and gold earrings that swung down against her collarbones like a ball and chain.

It was only when she joined Megan Thee Stallion onstage to receive the award for Best Rap Song (“Savage”), that her dress was fully visible: very short, sculpted into exaggerated curves, with matching leather gloves that ended in gold panther claws.

The look was femininity, the X Games version. And it pretty much summed up the night: one dominated by women, who (Billie Eilish aside) were unapologetically in your face with their lady parts and the associated power politics, whether it was Megan in her strapless tangerine dream of a Dolce & Gabbana gown complete with mega-butt-bow, Lizzo in a mint green shirred Balmain prom dress or Dua Lipa in a sheer crystal Versace butterfly slip with cutouts at the side.

Cleavage was the dominant accessory, even more than masks matched to gowns (though there was a lot of that) or Harry Styles’s feather boas. 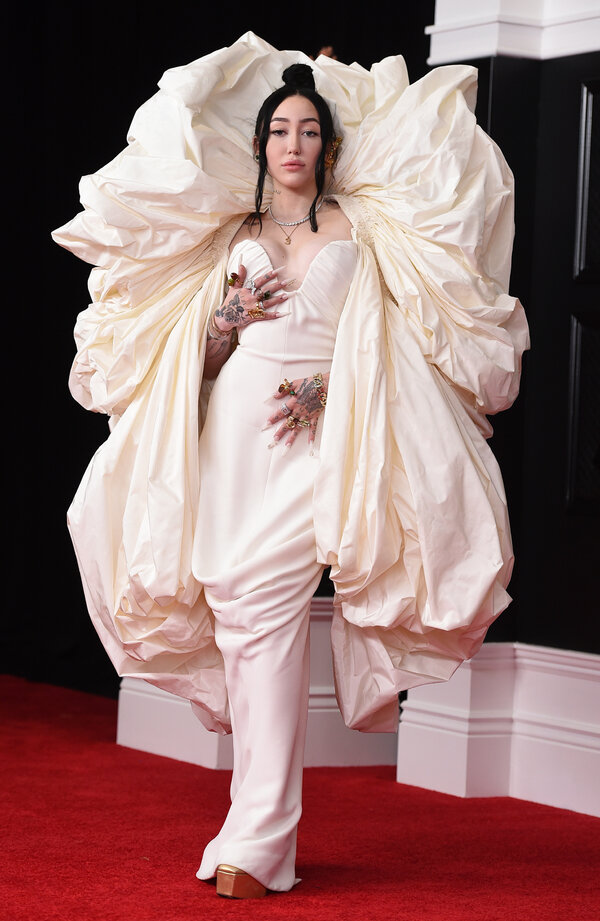 As it happened, Beyoncé’s dress was designed by Daniel Roseberry for Schiaparelli, the man and brand also responsible for the over-the-top meme-inducing whipped cream cloud worn on Grammy night by Noah Cyrus. The one that looked like she had swan-dived into a giant fluffy dessert and emerged with it attached, nimbus-like, to her body: half angel, half pastry confection.

Before that, Schiaparelli was the brand responsible for the enormous bird-bedecked ball gown that Lady Gaga wore for her performance at President Biden’s inauguration in January, and the blue-sky gown and hot pink pantsuit Regina King wore when she won her Emmy last September.

All of which suggests that, as the world begins to emerge from the strictures of the pandemic, Mr. Roseberry, who only stepped into the house that Schiap built in 2019, may be becoming the breakout red carpet designer of choice.

[The red carpet returned for the 2021 Golden Globes, and it actually was a lot of fun.]

You can understand it. The last year was a surreal time for many. It makes sense that a brand founded on the tenets of surrealism would rise to meet the moment. And Mr. Roseberry’s Schiap has defiantly not played it safe; has erred even, on the side of absurdity.

He was also responsible for the jolly green Hulk breast plate Kim Kardashian wore at Christmas, and once bought an octopus at a fish market, photographed it, made prints for a collection — and then cooked it up for dinner. He is happy blowing raspberries at some of the old establishment rules of “proper” dressing (even proper party dressing) and creating designs that demand attention. Even if some of it involves laughter. Maybe especially if it involves laughter.

“The things people have been responding to the most are the ones that scream instead of whisper,” Mr. Roseberry said on a Zoom call earlier this month, when he unveiled his ready-to-wear show. (Beyoncé’s dress was, natch, couture.) Well, yeah. We’ve all had enough of speaking softly in our own homes.

Before the red carpet machine had ground to a coronavirus-induced halt, it had gotten awfully constrained, sartorially speaking. Afraid of risk. Now fear has been put into powerful context, and clothes are back where they should be: as expressions of personality, of life, of fantasy.

One can only imagine what the Oscars may bring.