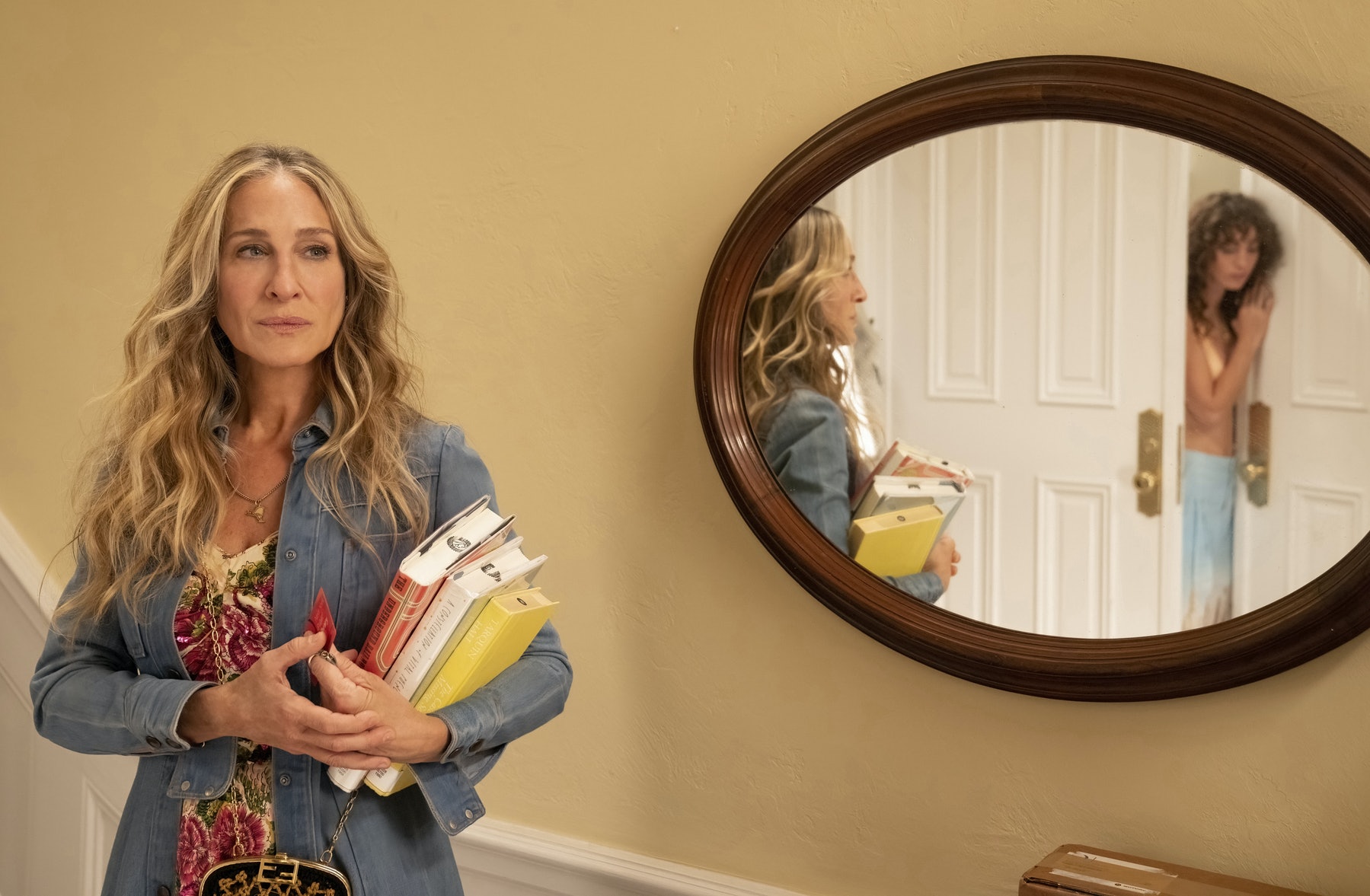 Carrie’s got company at her brownstone, and she isn’t exactly thrilled. And Just Like That… episode 8 introduces her downstairs neighbor Lisette (Katerina Tannenbaum), a young jewelry designer who’s far too cool for Carrie’s comfort. Miranda has much bigger problems on her hands: In what will no doubt prove to be a disastrous decision, she’s gone off the rails and made up her mind to divorce Steve in pursuit of Che. She’s fallen head over heels, and apparently, the feeling is mutual—not that we have any hope things will go as Miranda plans. (We suggest the “Justice for Steve” crowd stop watching from here on out.) On the bright side, we’ve finally solved the mystery of Carrie’s rubber kitchen gloves ensemble, which was widely perceived as unhinged when paparazzi spotted it on Sarah Jessica Parker last fall. Take it in, in all its glory—along with the rest of the gang’s latest notable looks, below, and catch up on last week’s here.

Che’s speech at a Pride rally actually isn’t nearly as bad as we’d expect. Instead, it’s Miranda who’s making us cringe. She’s far, far too smitten with someone who doesn’t seem to be keen on monogamy. Case in point: Their sweater reads “Angels Have No Gender But Lots of Sex.”

Carrie is not going to let you forget that she’s a New Yorker. At this point in the series, she’s proudly repped the Big Apple at least four times (and that’s not counting all the WNYC totes she carried on set.) Her latest is a vintage shirt emblazoned with trees and the words “I Love Central Park,” worn Carrie-style atop a gala-appropriate midi skirt. She appears to be shopping around a store, which unsurprisingly ends up being the many, many clothing racks in her apartment. “Oh my god, it’s like the Barney’s warehouse sale,” Seema says upon her arrival.

It turns out Charlotte has more than one up-and-coming Black designer in her wardrobe. (She memorably toted a Brandon Blackwood bag in episode 6.) Her latest pink ensemble consists of a printed Eliza Christoph skirt, which was handcrafted in Kenya, along with a cashmere cardigan by Tibi and pearl-heavy quilted bag by Chanel. She insists she isn’t “throwing shade” (“it’s what my kids say”) at Miranda for planning to dump Steve for Che, but there’s no denying that Charlotte isn’t what her kids might describe as “shook.” Meanwhile, in Miranda and Carrie’s eyes, the fact that she still gives Harry blowjobs is an even bigger deal. “Is he dying or something?,” Carrie asks, aghast.

Carrie and Miranda have another post-meal heart-to-heart. The former is in a flowy Oscar de la Renta dress and another silver Paco Rabanne bag, while the latter is looking sophisticated in A.L.C. pants with a paperbag waist (and an excellent smokey eye). While strolling through Chelsea Market, Carrie makes up her mind to buy her hip young neighbor Lisette (Katerina Tannenbaum) some brownies to “apologize for no longer being cool” after telling her to keep it down the night before.

Speaking of her neighbor, Lisette pops up in a completely sheer dress and quilted statement boots by Off-White at precisely the wrong moment for Carrie. She’s in her new “one cigarette a day” getup, which, well, is really something…

“I allow myself one a day in a walk around the block with, like, three kerchiefs on my head and Playtex kitchen gloves,” Carrie previously told Seema. “I just can’t risk having that smell in my hair, you know, and on my hands… eugh.” Hey, at least cool-girl Lisette likely recognized her gingham dress as Batsheva.

While discussing Lily’s selfie with Charlotte, Carrie—who’s wearing a draped blue dress with ruffles—utters a phrase we’d never expect in a million years. “Charlotte,” she says of the hot pink bra and leggings Lily wore in the picture, “it’s just clothes.”

Later that night, Carrie storms downstairs to shut down what she assumes is yet another of Lisette’s raucous get-togethers. Instead, she finds the jewelry designer all alone and fast asleep in a semi-nude sequined dress, clutching an empty glass of Champagne.

And just like that, Carrie realizes some things—such as her gigantic tiered Versace dress—should never be put in storage. “I’ve only worn her twice,” she tells Seema of her “pride and joy” earlier in the episode. “Once in Paris, and once here, just for fun. I sat at that window and ate a whole thing of Jiffy Pop.” Looks like that might become a tradition.