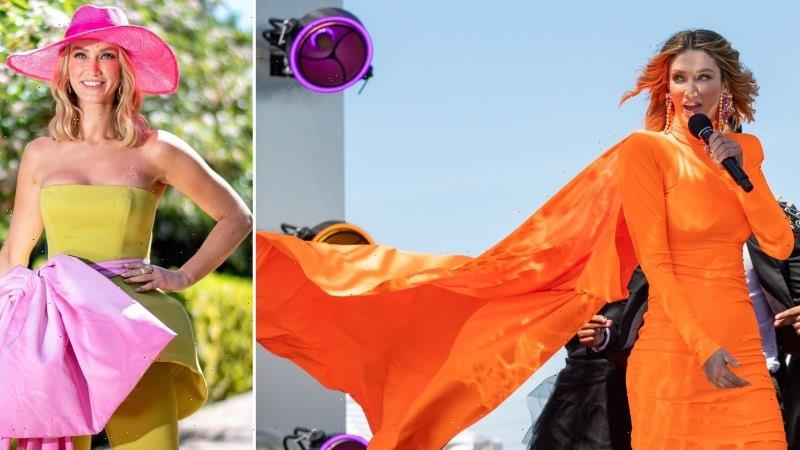 Like the winner of the Melbourne Cup, racegoers at Flemington came close to being very elegant, with some minor errors failing to get in the way of a stylish performance. After a disappointing Derby Day that challenged the city’s self-imposed title of Australia’s fashion capital, Melburnians rallied when it counted, delivering a field of refined racewear from traditionalists and those intent on bending staid rules.

With the reduced attendee capacity thinning out the crowd of men in novelty attire and women in singlets disguised as dresses, the atmosphere of an elevated country race day added to the overall sophistication. 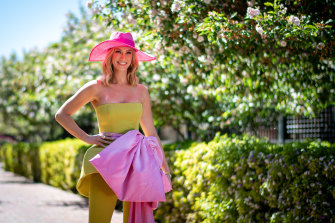 The day belonged to performer Delta Goodrem, who filled the Jennifer Hawkins sized void that has marred the carnival since the former Miss Universe stepped down as Myer ambassador in 2018. In two outfits from Sydney designer Mariam Seddiq, the singer showed some welcome edge, moving further away from her goody-two shoes, Olivia Newton John 2.0 image.

In a strapless lime green jumpsuit, adorned with an extravagant bow and topped by a wide-brimmed Nerida Winter hat, Goodrem was the personification of contemporary sophistication, with a slight air of the ridiculous that made the ensemble racewear.

For her performance Delta’s variant was a fitted, fluorescent orange caped dress from Seddiq, that floated elegantly in the Flemington wind. While a choir dressed in uniforms that resembled Jetstar flight staff summoned the energy of a Hillsong gathering, Goodrem’s look called to mind Sydney’s Mardi Gras, delivering a welcome level of camp to the day. 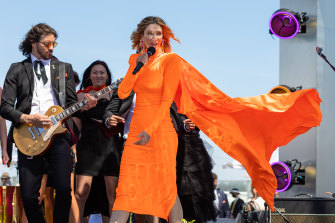 Carty delivered My Fair Lady elegance with a wide-brimmed hat from Tasmanian milliner Meghan Britton, without falling into the costume trap that blighted Nicole Kidman’s appearance at Derby Day in 2012 wearing L’Wren Scott.

In a Zimmermann dress purchased before the lengthy lockdown, Carty was happy to be celebrating again.

“It’s wonderful to be dressing up again. You can imagine that this is a change from what I have to wear to work. We all deserve the chance to feel good again,” Carty said.

Masterchef judge Melissa Leong had also adopted the feelgood approach. At first glance the dedicated follower of flan and fashion appeared to break with Melbourne Cup tradition by wearing a black strapless column dress from Cappellazzo Couture, but closer inspection revealed eyelids with all the colours of jockey silks. Make-up artist Shella Martin applied the mini paillettes to tie in with a pink shawl, almost upstaged by strands of Van Cleef & Arpels jewellery. 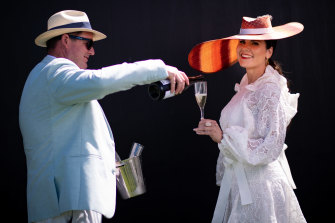 “It all felt a bit restrained until we added the make-up, which works best against clear, dewy skin,” Leong said. “The shawl adds a touch of drama along with the jewellery.”

“I would never think to wear yellow with red,” Rogers said of her Silvana Tedesco yellow dress with an embellished collar and red Colette headband. “My partner says that I looked like a banana, but I like bananas.” 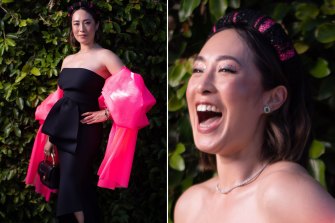 If the Emerging Designer Award for Myer Fashions on Your Front Lawn is an accurate barometer, next year racegoers will be looking like David Bowie instead of fruit. 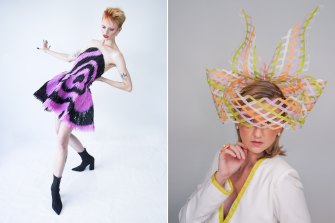 The headpiece encircled the forehead, forming a bow at the back in a lattice effect with a fresh palette of gelati colours. The winners of Best Dressed Man and Best Dressed Woman will be announced at Oaks Day.

Deserving a bigger fashion prize at The Cup were St John’s Ambulance employees. While their uniforms remain a tribute to practicality rather than pret-a-porter, their willingness to hand over Band-Aids to women struggling to return to life in heels failed to go unnoticed.