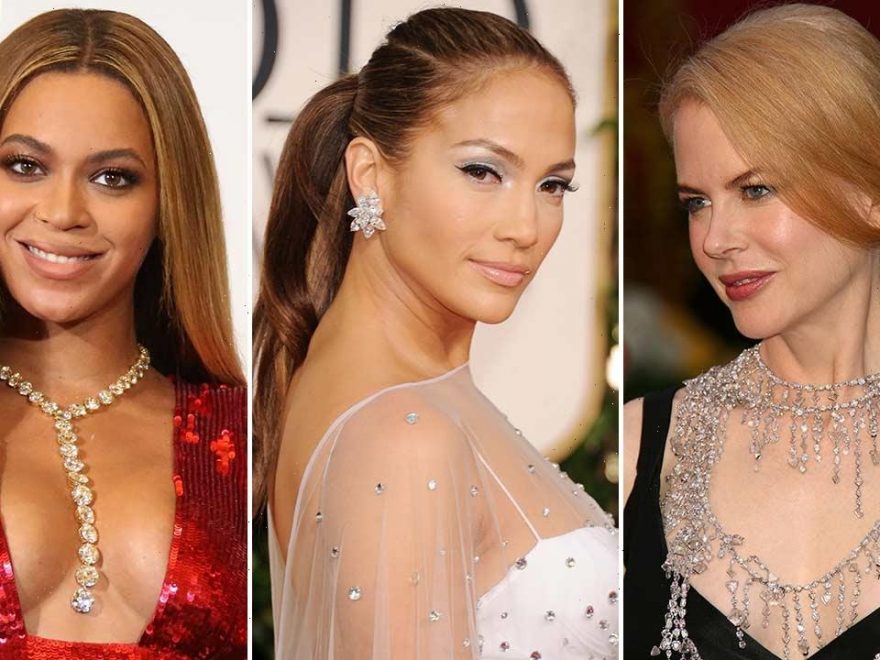 The biggest night in Hollywood is just around the corner, and we’ve never been more excited to lust over all the lavish red carpet looks at the 93rd Academy Awards. The best part? It won’t be over Zoom.

The coronavirus might have cancelled every event in the celebrity social calendar from the Met Gala to the Cannes Film Festival last year, but we’re still obsessed with all the lavish jewellery collections from the most iconic red carpet looks over the years.

From the biggest rocks weighing hundreds of carats to gorgeous, handcrafted necklaces with iconic designs, we’ve rounded up the world’s most expensive bling from the likes of Harry Winston, Lorraine Schwartz and Tiffany & Co that the stars have dared to wear on the red carpet.

But whose jewels are the most expensive of them all? Will a star at next week’s Oscars knock the crowning title off the top spot this year? The official countdown starts here…

She’s married to one of the richest men in the world so we weren’t surprised to see actress Salma Hayek on this list. At the 2018 Oscars, the star chose to accessorise her sparkling Gucci gown by dangling some impressive diamonds from her dainty earlobes.

Charlize Theron added a little sparkle – and a lot of dollars – to her Christian Dior Haute Couture gown at the Oscars in 2013 with these gorgeous diamond cuffs. No wonder she chose not to bother with a necklace.

Don’t be fooled by the rocks that she’s got … As if her outfit wasn’t sparkly enough, Jenny from the Block, aka Jennifer Lopez, added a pair of Harry Winston diamond cluster earrings worth $3m, plus a diamond brooch in her hair, diamond cuff and ring, all worth $2m, to the 2011 Golden Globes.

SEE PHOTOS: The most memorable red carpet dresses of all time

Isla Fisher was dressed to impress at the 2019 Golden Globes. The diminutive actress turned up weighed down by a 73-carat necklace, 8-carat earrings and two rings – one 2 carats and the other 6 carats – all from Harry Winston diamonds. The set had a value of $5.5m. Not too shabby.

Not content with making a statement in a tangerine ballgown and bright orange-red lipstick, Jessica Alba opted for this glamorous Harry Winston necklace at the 2013 Golden Globes.

Nicole Kidman’s multi-strand diamond necklace was not only one of the most memorable pieces of jewellery ever worn at the Oscars, it was also one of the most expensive. Made especially for the actress by L’Wren Scott in 2008, it featured more than 7,500 diamonds and took 6,200 hours to intricately handcraft.

SEE: All the best dressed stars at the 2020 Academy Awards

Modern Family actress Sofia Vergara was out to make a statement at the Emmys in 2013. The star opted for these enormous ruby, sapphire and Columbian emerald earrings from Lorraine Schwartz. But that wasn’t enough bling for Sofia; she then added a whopping 40-carat Columbian and diamond ring on her right hand and a 21-carat diamond on her left.

Amy Adams’ 2014 Golden Globes jewellery might have been subtle compared to many on this list but it still comes with a hefty price tag. The 30-carat diamond pendant, 12-carat diamond ring and 10-carat yellow gold diamond earrings add up to an impressive $8m in total.

The diamond leaf-effect earrings that Sandra Bullock wore to the 2014 Oscars were impressive at $1.8m but they were a drop in the ocean compared to her glittering bracelet which came in at a cool $6.4m.

The Tiffany & Co Lucida Star diamond necklace that Anne Hathaway wore to the 2011 Oscars had a weight of 94 carats and managed the impossible: to steal the limelight from the actress’ gorgeous Valentino red gown.

MORE: The gorgeous jewellery on the red carpet at the Oscars 2020

Known for her love of anything bling, Beyonce was always going to feature highly on this list. The singer’s most expensive piece of jewellery (to date) is the Lorraine Schwartz, 400-carat diamond necklace that she wore with several of the designer’s rings to the 2017 Grammy Awards.

Charlize Theron likes to pull out the stops when it comes to pricey jewellery and the 2014 Oscars were no exception. The actress glittered on the red carpet, wearing a 21-carat emerald-cut diamond necklace and diamond earrings, all from Hollywood’s go-to jeweler Harry Winston.

If Cate Blanchett was nervous about wearing millions and millions of dollars of diamonds on Oscar night in 2014, it certainly didn’t show. The actress was a vision in opal earrings, a diamond bracelet and ring, all by Chopard.

Of course Madonna’s been wearing million-dollar jewellery to the Oscars before it became the norm. The singer arrived in 1991, channelling Marilyn Monroe in $20m worth of Harry Winston gems.

Titanic star Gloria Stuart gave a nod to the Heart of the Ocean necklace made famous by the film when she turned up to the 1998 Academy Awards in this 15-carat blue diamond. The custom-made piece was certainly worth diving deep into the ocean for, being allegedly worth $20m.

Audrey Hepburn wore this gigantic 128-carat yellow diamond when she promoted Breakfast at Tiffany’s but Lady Gaga gave this iconic Tiffany diamond a new lease of life when she turned up wearing it at the 2019 Oscars.

But the most expensive jewel ever worn on the red carpet wasn’t worn to the Oscars – or even by an actress. Singer Carrie Underwood showed off this stunning 381-carat diamond necklace by Jonathan Arndt at the 2013 Grammys. Featuring oval, pear, marquis and round cut white diamonds, this necklace really is something special – and so is its price tag.

This article contains affiliate links, which means HELLO! may earn a small commission if a reader clicks through and makes a purchase. More information.