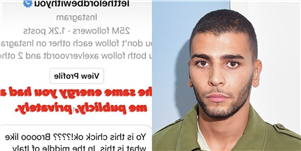 Today in news truly no one saw coming, Younes Bendjima is out here sharing a DM he allegedly got from Scott Disick, in which Scott called out their mutual ex Kourtney Kardashian for making out with Travis Barker in Italy. I’ll give you a moment to re-read that sentence.

Younes’ shared a screenshot of his alleged DM from Scott on Insta Stories, writing “keep the same energy you had about me publicly, privately” in bright red. Meanwhile, the purported DM from Scott was a picture of Kourtney and Travis making out on a boat in Italy (edit note: we went ahead and covered the pic since Kravis never asked to be included in this narrative!), along with the message “Yo is this chick okay!???? Broooo like what is this. In the middle of Italy.” Younes replied with “Doesn’t matter to me as long as she’s happy. PS: I ain’t your bro.”

Younes then went ahead and wrote in another Insta Story “Couldn’t miss this one. He been playing around for too long, tried to stay quiet and be the nice guy. Back to work now 10km.”

Yikes. Scott has yet to respond to Younes exposing him, while Kourtney and Travis have yet to respond to Scott allegedly DMing Younes about their PDA. But FYI that Scott made his feelings on Younes known back in June during the Keeping Up with the Kardashians’ reunion. Basically, host Andy Cohen told The Lord “it seems like you get really upset when Kourtney is linked to other guys,” to which he responded, “Me? No. I just want to kill them. Well, the last guy. Let’s all be honest here.” Kourtney then said, “nobody was happy with the last one.”

Truly awk times for everyone.