LOS ANGELES, CASEPTEMBER 26: Conservative political commentator, writer, and lawyer Ben Shapiro during a break of the filming of his show The Ben Shapiro Show on September 26,2018 in Los Angles, CA (Photo by Jessica Pons/ For The Washington Post via Getty Images

Legacy media outlets like The New York Times and The Washington Post are considered the gold standard of the journalism world. But on Facebook, they trail far behind conservative outlets like Fox News and The Daily Wire, which is spearheaded by commentator Ben Shapiro, when it comes to drawing in readers.

The Daily Wire was the top publisher on Facebook in July, the most recent month data is available, according to research shared by data firm NewsWhip. The outlet had 98.9 million engagements for the month, or about 8 million more engagements than CNN, the next closest outlet. (Engagement counts all likes, reactions, comments and shares that a post receives.) Those figures easily blew past The New York Times, which had 61.5 million engagements, and The Washington Post’s 43.6 million engagements.

Further proof that conservative media is thriving on Facebook: Fox News was the third-most-popular publisher in July, with nearly 86 million engagements. That trend carried over to August. Kevin Roose, a tech columnist with The New York Times, recently pointed out that Shapiro’s Facebook engagement last month dwarfed the Times, the Post and several other outlets, including NPR and NBC.

So why are right-leaning outlets so wildly popular on Facebook?

Some of the gap could be attributable to sites like The Washington Post and The New York Times keeping their articles behind a paywall, unlike The Daily Wire and Fox News; if readers know you must pay to read, they may be less likely to share it. The impact this has on a publisher’s overall engagement level is negligible, though, according to Benedict Nicholson, NewsWhip’s head of research.

Jeremy Boreing, the co-CEO of The Daily Wire, pointed to a few reasons for his site’s Facebook success. One key factor, he told TheWrap in a phone interview, is that The Daily Wire has focused on stories other outlets have either shied away from or that he claims they failed to accurately report on — leaving a void for conservative publishers to fill. He believes mainstream outlets emphasized the “mostly peaceful” element of widespread protests following George Floyd’s death and paid little attention to the rioting and looting.

“We talked about some things that the media did not talk about,” Boreing said. “The legacy media in July dedicated the bulk of their coverage to COVID, which, while a very important story, is a story that has been going on in a major way in this country since March. We covered the riots that are taking place in American cities.”

Fewer conservative voices at top newspapers is another reason The Daily Wire and Fox News are outperforming The New York Times, according to Stephen Miller, a contributor to Spectator USA and host of the Versus Media podcast. By not offering a conservative flavor, outlets are missing out on engagement from readers who are looking for alternative viewpoints. That’s driving Facebook users to publishers that offer right-leaning views, he said.

“Mainstream outlets have effectively phased out conservative voices and viewpoints at their networks and newspapers as they have clearly slid further left in ideology. Conservatives viewpoints have also largely been erased from Hollywood, on television programming, as well as academia,” Miller said. “So they are effectively all pooled into two places: Fox News and Facebook, whereas progressives on the left have several options to get their news so the audience is spread out more.” 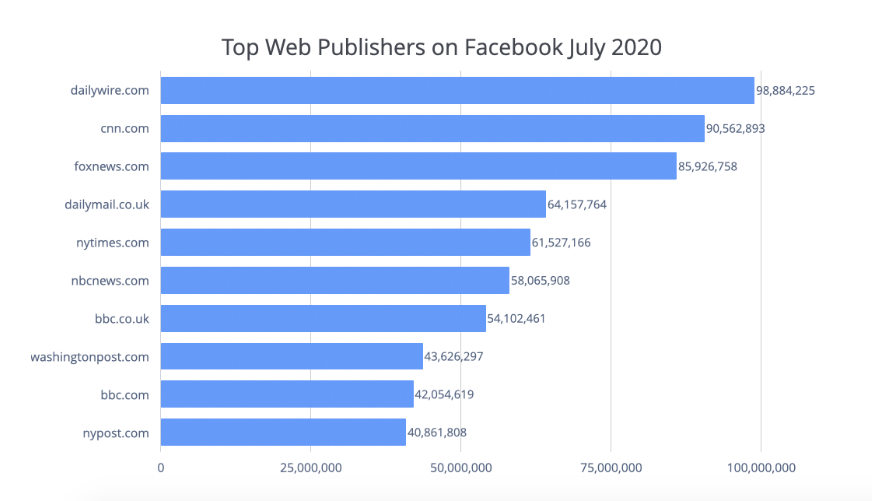 Over the last several years, The New York Times has added Bret Stephens and Ross Douthat, two anti-Trump conservatives, to its opinion section. But it hasn’t always been a healthy relationship.

This summer, that same opinion section embroiled in controversy when staffers said a column published by Republican Sen. Tom Cotton, arguing the U.S. military should be used in certain cities to stop rioting, put Black staffers “in danger.” The internal strife over the column led editorial page editor James Bennet to resign. Columnist Bari Weiss — who many consider a conservative, although she has described herself as a left-leaning centrist — joined Bennet soon after, saying the Times had grown out-of-touch with readers who aren’t on the left.

“The paper of record is, more and more, the record of those living in a distant galaxy, one whose concerns are profoundly removed from the lives of most people,” Weiss said in her public resignation letter.

Simply from a business perspective, Miller said, it would make sense for top publishers to offer more conservative voices. The Daily Wire has benefited from its ties to Shapiro, one of the biggest names in political media. Shapiro has 3 million followers on Twitter, nearly 6 million on Facebook and hosts the seventh-ranked podcast on Apple’s charts. He’s a one-man juggernaut on par with Tucker Carlson and Sean Hannity.

But instead of “looking inward at what they’re doing wrong,” Miller said, outlets like CNN have shifted their energy, calling for regulations against Facebook. “Hire more conservative voices and express more viewpoints on the right,” Miller said. “Spread the audience out more. But they’re not going to do that, so they attack Facebook, where these voices have coalesced instead.”

TheWrap reached out to a number of independent media analysts for their opinion on why conservative outlets perform so well on Facebook — and whether they agree with Boreing and Miller’s assessments. Six analysts declined to weigh in; several others did not respond to TheWrap’s request for comment.

Meanwhile, The Daily Wire’s success has led to its own share of criticism.

In late June, Popular Information reported the outlet had broken Facebook’s rules by having other Facebook pages share their posts in exchange for money. Boreing said The Daily Wire was unaware it was violating Facebook’s rules, in part, because it can be hard to keep up with what is and isn’t allowed on the platform. After the report came out, he looked into The Daily Wire’s affiliate network and found it provided, at most, 3% of the site’s monthly Facebook engagement. Boreing said he decided to cancel the entire program immediately, if only to keep sites like Popular Information off The Daily Wire’s back. The decision did little to curb the outlet’s performance on Facebook, at least in July, as it ranked atop Facebook’s publisher leader board.

Overall, the market is ripe for non-legacy outlets like The Daily Wire.

A recent survey from Gallup and The Knight Foundation found 54% of Americans believe reporters “intentionally misrepresent facts,” while about 66% said they’re worried about bias in their news. (These data points included a wide range of media outlets, including right-leaning outlets like Fox News and The Daily Wire, as well as left-leaning outlets like The Young Turks and Crooked Media.)

Miller said one “turning point” for many Americans, both on the right and the left, came in major outlets’ coverage of the high school student from Covington, Kentucky, during a 2019 rally in Washington, D.C. CNN and The Washington Post settled defamation lawsuits with Nicholas Sandmann, the student who was portrayed as an instigator against a Native American man; video later showed the man approached Sandmann at the event, banging a drum, undermining the portrayal of Sandmann as an aggressor. The mishandling of that story, Miller said, has dented the mainstream media’s credibility — and galvanized more people to look for their news from sites like The Daily Wire.

Boreing added that readers and Facebook users are “fed up” with the “illusion of objectivity.” This has worked in The Daily Wire’s favor, he said, because the outlet doesn’t hide its slant. “We own our biases,” Boreing said. “We are a conservative news organization. We’re not hiding it. We don’t pretend otherwise.”

Still, Boreing doesn’t completely write-off outlets like The New York Times. The Times, he said, “performs an important service,” and simply does reporting The Daily Wire can’t do. But that’s yet another reason The Daily Wire performs better on Facebook, he said: No one has time to read a 17-minute, 2,000-word article from The Times while scanning Facebook on their lunch break. “That’s not what Facebook is for.”

Instead, The Daily Wire will often mine those large stories, pull out the juiciest piece of news and share quick-hit posts with a specific perspective. It’s a proven strategy that’s helped propel The Daily Wire — with less than two dozen employees across its editorial and social media teams — ahead of every legacy media outlet on Facebook. After all, he said, The Daily Wire, which is set to celebrate its five-year anniversary this month, was founded as a digital-first publisher.