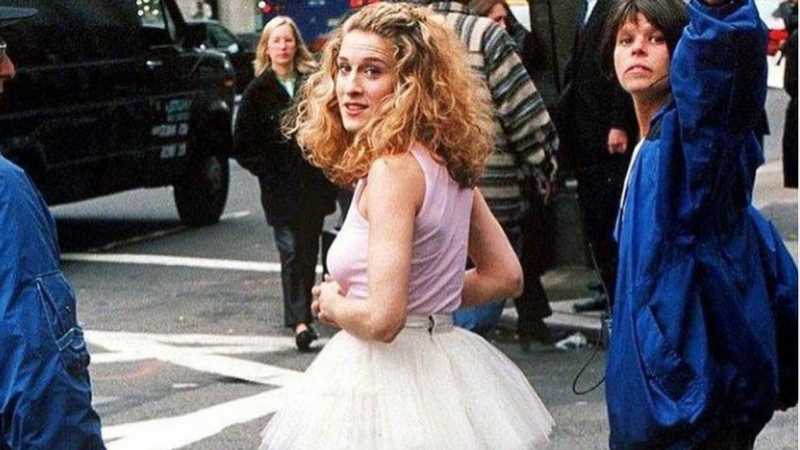 Is it possible a tutu can become iconic? After all, they are traditionally an article of clothing mostly reserved for performers in “Swan Lake” and children under five. But, as Carrie Bradshaw (or Sarah Jessica Parker, if you want to be more real about it) has proven time and time again, she can make almost anything she wears legendary.

We’re not here to discuss her staple “Carrie” necklace, Manolos, or a bobby pin with a bird sewn on it. We’re here to talk about the very beginning shot that continues to fill us with glee 20 years later. More specifically, the opening credit tutu that has forever cut a tutu-shaped slice into our long-term memories.

As put together as Carrie Bradshaw looks in the opening credits (at least before she gets sprayed down by dirty street water), the entire look became what it was by just a spur-of-the-moment decision. “I was in a showroom and there was a little bucket on the floor, for like, 5 dollars each or something,” says Pat Field, “Sex and the City”‘s head costume designer. “And I pulled out this tulle skirt, and I’m like, ‘I don’t know, let’s just take this and we’ll see'” (via HuffPost).

Pat Field is keeping the tutu a classic

As random as Field’s choice may have been, it is clear she struck gold. And today, she’s rightfully capitalizing off her winning selection. In addition to being an in-demand costume designer (we’re looking at you “Emily in Paris”), she also runs her own clothing store. And today, you can get a replica of the iconic tutu on her website for $140. It comes in small, medium, and large, and in black or white (via Patricia Field Art Fashion). Field’s website has its very own “Sex and The City” section where along with the tutu skirt, super fans and fashionistas alike can pick up replicas of some of the shows most memorable fashion moments (via Patricia Field Art Fashion).

When discussing the opening credit outfit, Field believes the tutu works so well because of its symbolic nature. “It was such a brilliant choice because, in a way, Carrie’s dancing through her life in New York,” she says (via 29Secrets). Luckily, we can now dance our way through our own lives in its replica.