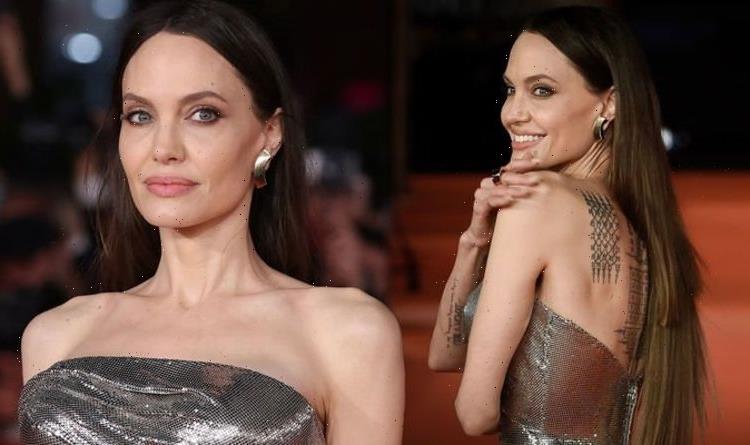 Angelina Jolie looked incredible when she walked the red carpet in Rome on Sunday night for the premiere of her new movie. The 46-year-old wowed in a stunning metallic gown for the star-studded event, however it was her bad extensions that caught the attention of fans.

Angelina was pictured at the Rome Film Fest for the release of the latest Marvel flick Eternals.

The American actress, who plays Thena in the superhero film, sashayed along the red carpet in a strapless Versace number, which shimmered and sparkled as she walked.

She wore her long brunette tresses loose and in a straight style cascading down her back.

The mum-of-six, who attended the film event with two of her daughters, opted for hair extensions for the occasion to give her tresses volume and length.

She posed for pictures on her own and with teenagers Zahara and Shiloh.

However, eagle-eyed Twitter users spotted a step in Angelina’s hair, where her natural tresses ended.

Many took to social media to point out the error.

Some even called for the hair stylist to be fired.

“Angelina Jolie is spectacular as always – in @Versace for the #Eternals launch. So why the bad hair extensions?” wrote user LisaTant online.

“I freaking loveeed everything of Angelina in Rome apart from the hair extension, only misstep was the hairstyle,”(sic) user CloudyLuna2 agreed.

However, others didn’t hold back with their comments.

“She’s perfect but whoever did angelina jolie’s hair in rome needs to lost their job what’s going on here,”(sic) eternallythena remarked.

The actress has certainly had a busy few days promoting her latest release.

Yesterday she sported a completely different look for another red carpet event in Italy.

This time, Angelina wore her famous tresses at their natural length, just past her shoulders.

She looked radiant when she smiled for the cameras in a little black dress.

Angelina put on a leggy display in the Dolce and Gabbana outfit which she teamed with black strappy heels.

Before jetting to Rome, the movie star joined her Eternals co-stars for the world premiere of their film in Los Angeles.

Wearing a full length bronze gown and an unusual chin chuff, the Maleficent star posed alongside her kids Maddox, Zahara, Shiloh and twins Knox and Vivienne, who she shares with ex husband Brad Pitt.