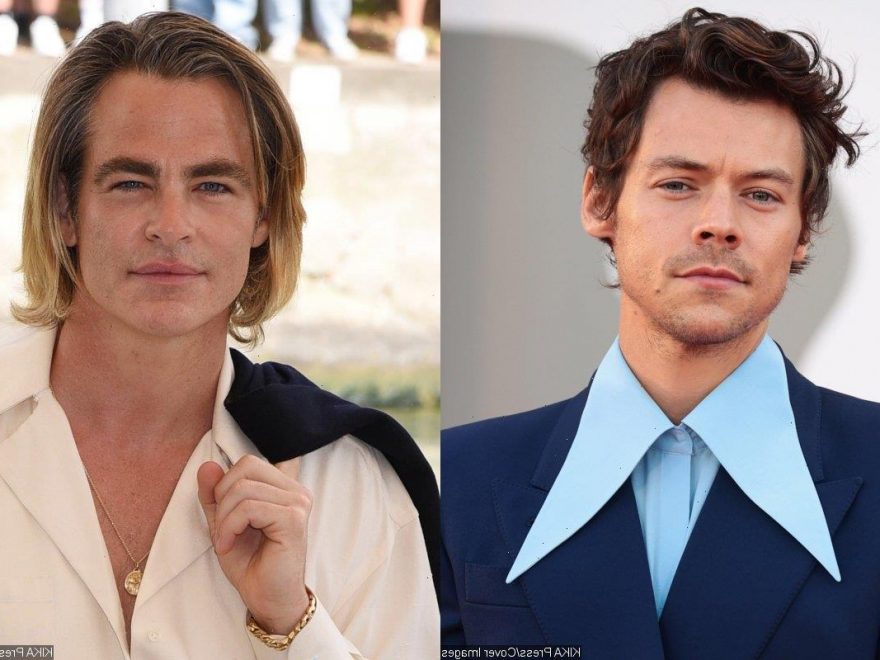 In the said footage, the former member of One Direction seems to spit what appears to be gum from his mouth on his co-star’s lap before taking a seat next to him.

AceShowbiz -The drama between the cast of “Don’t Worry Darling” was put on full display during the Venice Film Festival and now many fans believe Harry Styles may have spit on Chris Pine inside the theater. A video capturing the awkward moment has since gone viral on social media.

On Monday, September 5, a video showed the former One Direction member walking to his seat at Venice Film Festival. While slightly bending over his body, the pop star appeared to spit on the 42-year-old actor, who sat next to the crooner’s girlfriend Olivia Wilde.

Immediately after Harry made that motion, Chris abruptly stopped clapping and looked to his lap before he started laughing as the brief video came to an end. Another video showed a different angle of Harry and Chris’ awkward exchange.

The footage caused quite a stir among many on Twitter, with one person who first posted the video saying, “this is all I can say: There are no trash cans in the Sala Grande, not in the lobby or in the mezzanine where these seats are located. So hypothetically, if you were chewing a piece of gum, there’d be no place to put it.”

Another person commented, “Whether or not Harry spit on Chris is gonna be one of the great mysteries of our time. Like what Bill Murray whispered at the end of ‘Lost in Translation‘ or ‘Who Bit Beyonce?‘.” Someone else quipped, “the ‘i did not spit on that man’ notes app apology harry styles will soon be forced to tweet is already shaping up to be an all-timer.”

“the don’t worry darling drama is getting more and more absurd,” another Twitter user opined, “like what do you mean harry styles [spins wheel] spit on [spins wheel] chris pine.” A different person believed that the awkward moment was just a publicity stunt, tweeting, “This has to be the most/wildest pre movie drama in recent memory. Every turn there is something. It has to be fake.”

That aside, Chris also goes viral for zoning out during the “Don’t Worry Darling” press conference at the festival. A video that has circulated online saw the “Star Trek” actor’s reaction to a bizarre quote from his co-star Harry.

“You know my favorite thing about the movie like it feels like a movie it feels like a real like go to the theater film movie that you know you kind of… the reason why you go to watch something on the big screen,” the actor/singer said during the press conference.

Upon learning of Harry’s comment, Chris looked confused but he remained calm. However, Twitter users believed that he screamed, with one saying, “you can almost see the screams catching in his throat.” Another tweeted, “Poor Chris Pine looks like he’s rather be anywhere else on the planet.”

Elsewhere during the press conference, the film’s director Olivia also addressed the feud rumors between her and her star Florence Pugh. Calling the stories “endless tabloid gossip,” she sang praise for the “Black Widow” star.

“Florence is a force and we are so grateful she’s able to make it tonight despite being in production on ‘Dune‘,” she told reporters. “I know as a director how disruptive it is to lose an actor, even for a day, so I’m very grateful to her, I’m grateful to [‘Dune: Part Two‘ director] Denis Villeneuve for helping us, and we’re really thrilled we get to celebrate her work tonight.”

Olivia added, “I can’t say enough how honored I am to have her as our lead.” The 38-year-old actress and filmmaker continued. “She’s amazing in the film, and as for all the endless tabloid gossip and all the noise out there, I mean, the internet feeds itself. I don’t feel the need to contribute, I think it’s sufficiently well nourished.”