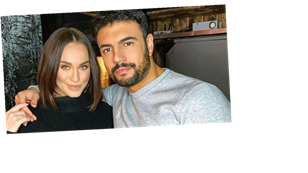 Vicky Pattison has hinted at marriage plans with boyfriend Ercan Ramadan after sharing snaps of her dream wedding.

She then asked her 4.7 million followers: “Ok, what’s your favourite- 1, 2 or 3?! All I know is that I want twinkle lights, candles and flowers EVERYWHERE when I eventually get married.” She added: “I can’t wait til we can start going to weddings again man.. Can you?!”

Her post didn’t go unnoticed by boyfriend Ercan, who cheekily commented: “Are you trying to hint something.”

Vicky replied: “Awww not at all, in your own time petal… I’m going nowhere, I’ve found my [lobster].”

Pal Mario Falcone commented: “Hint hint @ercan_ram” alongside a laughing face, to which Vicky responded: “I’m gonna scare him off.”

Vicky had previously revealed marriage and babies are on the cards for the couple.

“Ercan is such a fantastic boyfriend, I’ve got a great job that I love doing, we have a fantastic flat. Why am I rushing anything? But I’d be lying if I didn’t think about babies and say ‘I hope he has his skin or my nose,’” she told the Sun in September.

“Babies and marriage is in the stars but I’m trying to not put any pressure on myself."

She added: “I can be entirely myself around you and know that you accept me for who I am- and I know I’m no expert, but that feels a lot like love to me.”

Vicky started dating Ercan in January 2019 following her split from ex fiancé John Noble after he was seen getting close to another woman in Dubai – just seven months before they were set to tie the knot.

Speaking on her podcast Vicky Pattison: The Secret To, Vicky previously revealed the devastating impact the break-up had on her.

“I’d convinced myself. And everything was rosy and it was fairytale and romantic and it was going to be great. And then of course it all fell apart.

"But that’s probably the first time in a year and a half I can say that because it was a really hard thing for us to get over.”