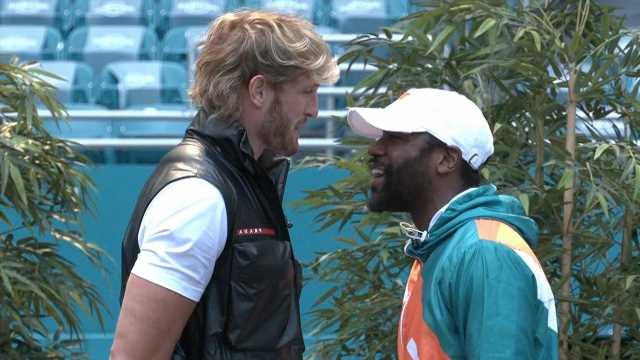 Floyd Mayweather and Logan Paul stepped into the ring together for their highly-anticipated boxing event on Sunday. The 44-year-old Hall of Fame boxing champion and 26-year-old YouTube personality faced off in an exhibition match at Hard Rock Stadium in Miami Gardens and they went the distance for 8 rounds without scoring a knockout.

Without a knockout, there was no official winner for the exhibition fight, which didn’t include judges or official scoring. Boos could be heard from fans who were expecting one of the boxers to score a knockout, and others took to Twitter to share their hopes for a KO.

And it’s over. Surprisingly no KO for a Floyd Mayweather. And this is an exhibition so there is no official winner. Crowd not happy. Floyd warned y’all and called this event a legalized bank robbery #MayweatherPaulpic.twitter.com/FzYJStu6vB

The CEO of showtime after Logan paul didn’t get Ko’d by Mayweather but millions of people payed for the fight: pic.twitter.com/mf2H68jdgL

Other fans commented on the amount of time Mayweather and Paul appeared to be “hugging” instead of fighting.

Logan Paul after round 4 be like…#MayweatherPaulpic.twitter.com/FPgz5x4UBF

During a post-fight interview, Mayweather said he had fun and called Paul a “great young fighter.”

“I had fun. You’ve got to realize, I’m not 21 anymore but it’s good to move around with these guys and test my skills just to have fun.”

“He was better than I thought he was,” he admitted, calling Paul “strong and tough.”

“He’s a tough, rough competitor,” Mayweather added. “And I was surprised by him tonight… Even though he doesn’t have that much experience, he knew how to use his weight and tie me up tonight.”

Paul seemed elated after going the distance with Mayweather, and said making it that far proves anything is possible.

“S**t, man, I don’t want anyone to tell me anything is impossible ever again,” Paul said. “The fact that I’m in here with one of the greatest boxers of all time proves the odds can be beat.”

ET’s Denny Directo caught up with Logan Paul last week and he said he was as “ready as I’ll ever be” after preparing for eight months.

“If you stay ready, you don’t got to get ready,” he said ahead of the match.

As far as being the person to pull Mayweather out of retirement, the Internet star said, “It’s crazy. I did the impossible already, so I’m just going to do it again Sunday. Easy.”

mayweather vs loganpaul in a nutshell#MayweatherPaulpic.twitter.com/RGH3VFvqPH

the iCarly fight was more entertaining than Floyd Mayweather vs Logan Paul 😂😂 pic.twitter.com/Zyeqa3pbrO

We’re at the point now where it’s time for a KO. If it doesn’t materialize that’s definitely some sort of victory for Logan Paul. #MayweatherPaulpic.twitter.com/GV5m2IcEAz

This sums up the Floyd Mayweather vs Logan and jake Paul Fight 😂😂💀💀
#MayweatherPaulpic.twitter.com/GYBF2yCEGA