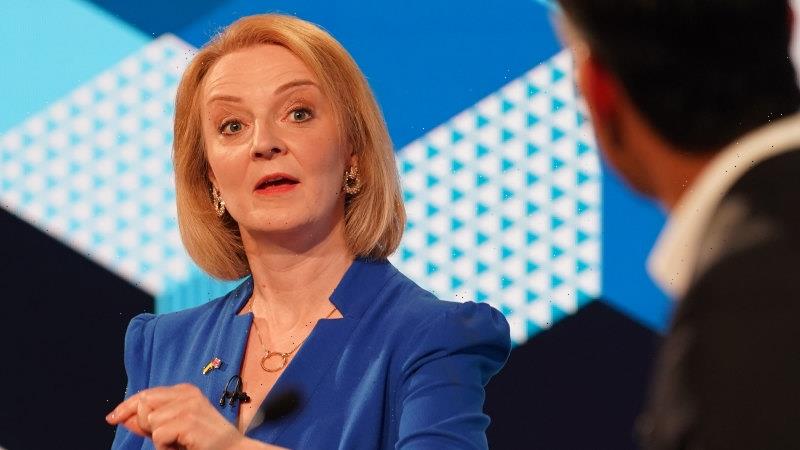 London: The contest to replace Boris Johnson has become personal and bitter with Liz Truss’ team attacking Rishi Sunak’s wealth, his suits and his private education.

The pair went head-to-head in the first televised debate and traded barbs on tax cuts, China, Boris Johnson and trust in politics. 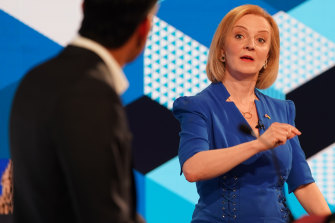 Sunak repeatedly interrupted Truss and was later accused by her team of “mansplaining”.

But the sharpest barbs came when they addressed each other personally.

“Liz Truss will be travelling the country wearing her earrings which cost circa £4.50 from Claire Accessories,” she said in a tweet. 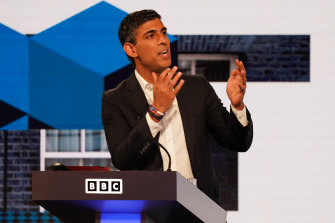 Defending his family’s wealth: Rishi Sunak during the debate. Credit:Getty

“Meanwhile… Rishi visits Teeside in Prada shoes worth £450 and sported £3500 bespoke suit as he prepared for crunch leadership vote.”

Truss was questioned about the attack during the final two candidates’ first head-to-head clash televised by the BBC on Monday evening, London time.

Truss said she was not sure how Dorries knew the origin of her earrings but that she didn’t have an issue with Sunak’s sartorial style but rather this tax agenda.

“I don’t have an issue with how expensive anyone else’s clothes are,” she said.

Sunak, a former hedge funder is wealthy in his own right but after marrying the daughter of an Indian billionaire, is subsequently ranked richer than the Queen.

Truss, the favourite to win, has repeatedly contrasted her schooling to Sunak’s education at prestigious Winchester and is fashioning herself as a working-class Tory.

She is considered the frontrunner with Tory party members.

Sunak, whose parents were pharmacists and the children of Indian-African migrants, said he was not born rich and took the attack head-on.

“You’ve brought it up before so let me just address it,” he said.

“My parents were part of an immigrant family that came here, they didn’t start with very much, but they worked day and night, saved and sacrificed to provide a better future for their three children.

“And I’m enormously grateful for everything that they did for me, and I’m certainly not going to apologise for the fact that they’ve worked hard and they’ve aspired to do that for their kids.

Sunak, as Chancellor of the Exchequer raised taxes to their highest level in the UK in 70-years is the underdog candidate, partly for raising taxes and also for being effectively forced to resign from Johnson’s Cabinet.

He is accusing Truss of planning to send up inflation and interest rates by promising to start cutting taxes, funded by more debt now.

“This is scaremongering, this is Project Fear,” Truss retorted. “I don’t believe this negative, declinist language,” she said.

Truss says Sunak’s plan, to start repairing the record levels of debt racked up during the pandemic as contractionary and that it will tip the UK into recession.

“Crashing the economy in order to pay a debt back quicker is a massive mistake and what I know is that mistake won’t just be felt by people living in London, it will be felt by people in towns and cities right across the United Kingdom,” she said.

They also sparred over China with Sunak, who has previously made few comments in public about China policy, accusing Truss, who has fashioned herself as a China-hawk, of wanting to deepen ties with Beijing.

“That was over a decade ago,” Truss said. She said that as foreign secretary, it was her department that had pushed for Britain’s tougher stance on China not the Treasury, which Sunak oversaw and agitated for closer relations.

A spokesman for Truss was reported as saying immediately after the debate: “Rishi Sunak has tonight proven he is not fit for office.”

“His aggressive mansplaining and shouty private school behaviour is desperate, unbecoming and is a gift to Labour.”

Both candidates ruled out having Johnson in their Cabinet and Truss said that although the outgoing prime minister made mistakes, they did not warrant the Conservative party removing him as leader.