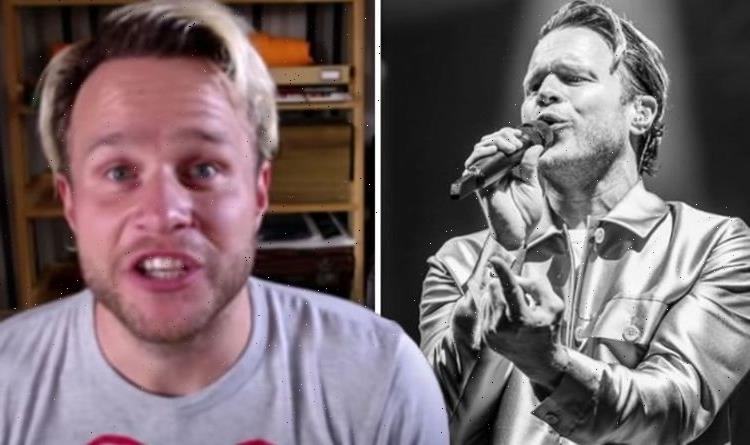 The Cube: Olly Murs shocks Phillip as he wins game

The Voice UK coach Olly Murs, 37, has said sorry to a huge crowd of his fans after he worried he could have been revealing too much due to his on-stage outfit. Olly returned to performing live last night after many concerts were postponed due to the coronavirus pandemic.

The singer opted to wear a statement silver suit for his performance, but became concerned about his trousers after he took to the stage.

Olly took to Instagram to apologise to the audience in view of his 3.6 million followers last night, shortly after his gig ended.

He shared a video of himself singing his hit song Dear Darlin’ while sitting down at the edge of the stage.

The star wrote alongside the clip: “Darlington.. you absolute legends.

“Sorry the old trousers were a little revealing tonight!

“So I decided to sit for this one,” he admitted, alongside a laughing emoji.

Olly followed up his apology by sharing what the song means to him.

He added: “Always special singing this one.”

Olly then shared a photo of the audience watching on as he performed.

He captioned the black and white snap: “Entertaining you lot is a job I never get bored of doing…

“I’ve got unreal fans let me tell ya!”

It comes after Olly was teased about his “supertight” outfit during a teaser clip of The Cube Celebrity special.

Olly signed up to appear on the ITV gameshow alongside Joe Dommett in the hopes to win a quarter of a million pounds for UNICEF.

The clip showed Olly wearing cream jeans and white trainers, which he paired with a green T-shirt.

Olly could be seen taking on a tricky challenge on the ITV game show before the time ran out.

The Cube host Phillip Schofield said in the video clip: “You couldn’t have been any closer!”

Olly replied: “In the corner of my eye I could just see it coming around and I was like ‘urgggggh!”

Joel joked: “To be fair, your outfit is as tight as a superhero’s!”

He added: “I didn’t want to shout because I felt like I was god, I’m going to put him off.

Olly shared the clip on Instagram and admitted: “This was bl**dy tense but loved every minute of it.