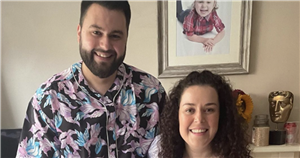 The Tracy Beaker star is already a proud mum to Avarie-Belle Betsy, five, with her partner Simon Brough.

And now, the pair are expanding their brood even further with another addition to the family.

Dani, 32, announced the news as she shared a photo of herself with her partner Simon and their daughter Avarie-Belle.

The couple's daughter is smiling widely while holding an ultrasound scan images, showing she can't wait to be a big sister.

Actress Dani told her 141,000 followers in the caption: "Han solo had Chewie. Frodo had Sam. Shrek had Donkey.

"Now be prepared for the adventures of Avarie-Belle and as of yet unnamed bump, coming February 2022" followed by a pink heart emoji and blue heart emoji, hinting she doesn't yet the know the gender of her second child.

The family were soon flooded with messages of congratulations in the comments section of Dani's post.

One wrote: "How super, congratulations" next to a red heart emoji.

While a third penned: "AHHHH A HUUUUGE CONGRATULATIONS TO YOU ALL", with three yellow heart emojis.

Dani and her sales manager man Simon began dating in 2015, around a year before welcoming their first child together.

Actress Dani shot to fame as she starred in The Story of Tracey Beaker, based on Jacqueline Wilson's popular book, in 2002. Since playing Tracey, Dani has starred as Janet in a production of the Rocky Horror Picture Show in 2013 and has since starred in a series of Tracy Beaker spin offs, including Dani's House from 2008 to 2012, Dani's Castle from 2013 to 2014.

She later reprised her role as a grown-up Tracy in BBC show, My Mum Tracy Beaker.

Tracy's childhood nemesis Justine Littlewood also made a comeback in her latest series.

In the show, Tracy is now a mum to 10 yea rold Jess. Ahead of the release of the new series, Dani revealed fans will be pleased with the "great" mother Tracey has become.

She told the BBC: "They're very different – Jess is quiet, she's really good at school, she loves reading, whereas Tracy obviously wasn't any one of those things."