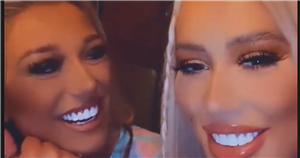 Bethan Kershaw has confirmed she is dating Demi Sims after they have rekindled a secret romance.

The 26 year old has admitted that she and Demi, 24, have dated previously and are now back together following Demi's split from Too Hot To Handle star Francesca Farago.

Geordie Shore star Bethan confirmed the pair are seeing each other after footage emerged of them kissing on a night out.

Blonde beauty Bethan told The Sun of her relationship with the The Only Way Is Essex babe: "Me and Demi have dated in the past, but it was on the low."

When the publication asked if the pair are seeing each other now, Bethan replied: "Yeah, we're dating, I'm seeing her.

"When I split up from my ex, I actually met Demi at the NTAs. I was with my ex and we were so unhappy."

She continued: "There are not a lot of girls I am attracted to, I'm only attracted to certain girls and I met her and I was like 'oh what’s this feeling?' and I felt really awful because I had a boyfriend.

"I was like 'eh I don't understand my feelings'. Then me and my ex split up and a couple of months after I messaged her.

"We dated in the past, we went to Dubai and she ended up getting with Francesca."

Demi and Francesca experienced a messy break up after a four month long whirlwind romance back in April. The beauty claimed she and Demi were "not on good terms" and said that following their break-up Demi "blocked her, deleted her and told her to leave London."

TOWIE stars: Past and present

Earlier this week, Bethan and Demi were seen larking around on Demi's Instagram stories, as they kissed and Bethan chewed on her braid.

The two were also joined by Bethan's Geordie Shore pals Chloe Ferry and Abbie Holborn as the reality stars headed to a bar.

Demi's sister Frankie shared a clip of the girls snogging on her Instagram stories, as Chloe, 25, looked on in shock.