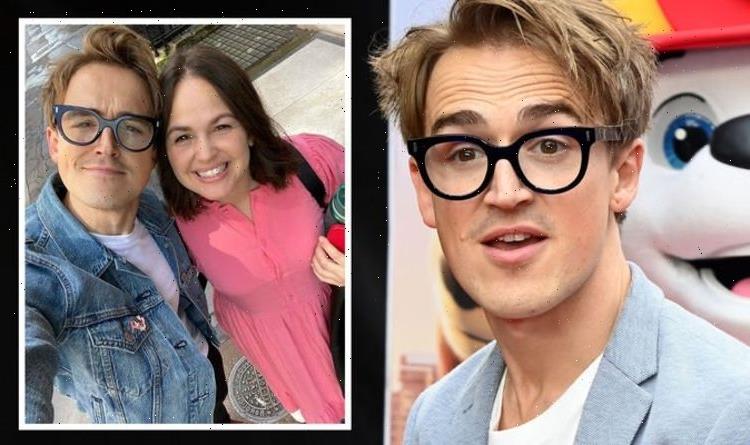 Tom Fletcher was the first contestant to be announced for the upcoming series of Strictly Come Dancing last week. The 36-year-old musician has said he is “totally terrified” about his stint on the dance floor and his wife is not concerned about the so-called Strictly “curse”.

Giovanna, who married her childhood sweetheart in 2012, said the pair would be “fine”.

During a film premiere at the weekend, she said she was “so excited” for her husband to take part in the popular BBC show.

“Tom’s doing Strictly and we’re so excited for him.

“The Strictly curse? No, I’m not worried about that. We’ll be fine,” she told The Sun at the Paw Patrol screening.

The Strictly curse refers to celebrities and their dance partners who have seen their own relationships suffer following their time in the BBC programme.

Busy schedules, long hours in the training room, sexy dance routines and close partnerships on the show can be contributing factors to the breakdown of relationships.

The author and podcaster is no stranger to starring in a reality show and perhaps has a better idea of what to expect than her husband.

Earlier this year, the mum-of-three took part in and won I’m A Celebrity… Get Me Out Of Here! during its first year at a dilapidated castle in Wales.

“I did I’m a Celeb, and now he’s doing Strictly.

“Well, we didn’t want to keep it boring in our household,” she added.

The couple, who met at school when they were 13-years-old, are now parents to Buzz, Buddy and Max.

Tom’s kids were excited about the news until they saw his dancing skills, the pop star joked.

“I think the fact that I’m actually going to be dancing on Strictly this year has only just started to sink in while I’m writing this!

“My kids were excited too until I started showing them my best dad-dancing in the kitchen.

“I’m not sure how far they’ll get me in the competition but I can’t wait to add some new moves to my embarrassing dad-dancing repertoire,” he said following the announcement.

The 44-year-old said he was feeling a mixture of emotions when the news was announced today.

“I am definitely excited, a little bit worried, mostly terrified and a small part of me is considering going into hiding!

“My kids have only ever asked me to go on two shows… Saturday Mash Up and Strictly.

“I did Saturday Mash Up this summer so… it’s time to embrace the sequins,” he said.