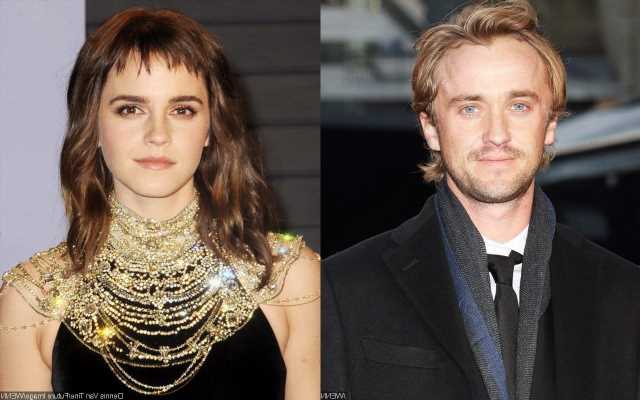 In an interview, the 33-year-old British actor, who played Draco Malfoy in ‘Harry Potter’ movie series, has a cryptic response when he’s asked about those long-running romance rumors.

AceShowbiz –Tom Felton has reacted to rumors that he dated “Harry Potter” co-star Emma Watson when they filmed “Harry Potters”. In an interview with Entertainment Tonight, Tom has a cryptic response when he was asked about those long-running romance rumors.

Not entirely denying the rumors, Tom said in the June 3 interview, “We are something, if that makes any sense.” While Tom didn’t elaborate what he meant by “something,” he added, “We’ve been very close for a long time. I adore her.” Gushing over the “Beauty and the Beast (2017)” star, the Draco Malfoy depictor said, “I think she’s fantastic. Hopefully she returns the compliment.”

He also discussed how the romance rumors could even start, noting that it might stem from the rivalry between his character and Emma’s good wizard character, Hermione Granger. “As far as the romantic side of it, I think that’s a Slytherin/Gryffindor thing rather than a Tom and Emma thing,” he commented on the matter.

Tom added, “I absolutely think the world of her. I think to be a part of what we’ve all been a part of, but for her to be the only girl, certainly the youngest one on set, to grow up with what she had to grow up with was incredibly exciting. You’re going to get me teary now, but no, I think she’s a fantastic influence on the world.”

The 33-year-old also revealed that he still keeps in touch with the actress. “I spoke to Emma a couple days ago and immediately it was conversations about, ‘Oh wow, the kitchen sink’s been plugged’ or some trivial nonsense like my dog wouldn’t eat a particular kind of food,” he shared.

Fellow “Harry Potter” actor Rupert Grint was the one who sparked speculations Emma and Tom might be dating as he said back in 2019 that “there was always something” between Emma and Tom. “There was a little bit of a spark,” he said before clarifying that what Tom and Emma had was supposedly “like any kind of playground romance.”

Meanwhile, Evanna Lynch, who played Luna Lovegood in the popular movie series, hinted that the co-stars were crushing on one another during filming the earlier “Harry Potter” films. “[I joined when] everyone had kind of grown out of their crushes and they were moving on to, like, people in the outside world. And I felt that like, damn, I missed all the drama! It was so fun the last film, according to some stories. But no, by the time I got there, they were all mature and those hormones were calming down,” she shared.