The country superstar debuted the video for his latest single all about buying and selling cars yourself! His daughter also made her acting debut in the romantic clip that follows a first love story.

Tim McGraw, 54, got to have an unforgettable daddy-daughter moment with his youngest girl Audrey, 19, as she starred in his new music video for his song “7500 OBO.” The video premiered on Tim’s YouTube channel on Friday, August 13. Audrey marks her acting debut by playing a young woman in love. Over the course of the video, she and her beau share several romantic moments in a truck
(and around) a pick-up truck that she buys from her dad. The truck, of course, is highly symbolic of their young romance. The song title refers to the amount the amount Tim is selling the truck for.

Ahead of the video’s premiere, Tim tweeted about how excited he was that his daughter got to be a part of the Here On Earth track’s music video. “Couldn’t be more thrilled to have my youngest daughter, Audrey, play the lead role in the music video for ‘7500 OBO!’” he tweeted in an announcement on Monday August 9. He also shared a photo of himself with his arm around his daughter in front of a blue truck. Tim rocked his signature rustic, country look with a gray button-down, torn-up blue jeans and a baseball cap. Audrey wore a beautiful flowing dress with

Audrey also shared the announcement in an Instagram post. She shared the same photo as her dad and a black-and-white still from the video. In the photo, it looked like she was wearing a large denim jacket over the dress from the photo with her dad. She was standing in front of an old-fashioned house that looked like it would’ve fit in perfectly in a rural area. Tim has also tweeted out a few more behind the scenes photos and videos from the shoot. In one behind-the-scenes clip it also showed Tim’s fatherly instincts kicking in, as his daughter kissed someone in one scene. “I’m not calling that a make out scene,” he said in the video. 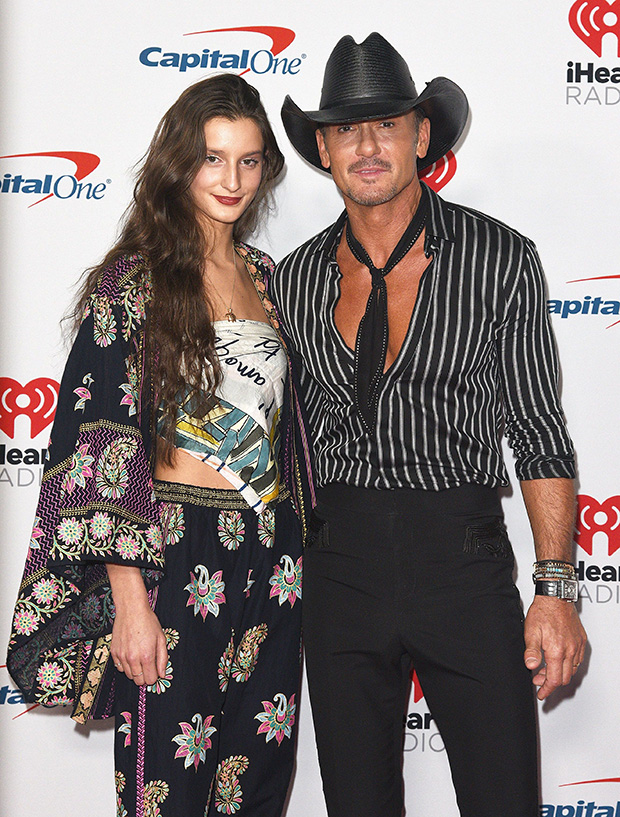 Audrey is Tim’s youngest daughter with his wife Faith Hill,53. The pair’s two older daughters are Gracie, 24, and Maggie, 22. Even though this is Audrey’s debut in one of her dad’s music videos, Audrey is very comfortable in front of the camera. The singers’ daughter is also a model and regularly posts pictures of herself from photoshoots to her Instagram. She’s not the only daughter who’s taken after her parents and pursued a career in the arts. Her older sister Gracie also regularly posts videos of herself, showing off her singing skills, usually belting out excellent renditions of musical theater numbers.