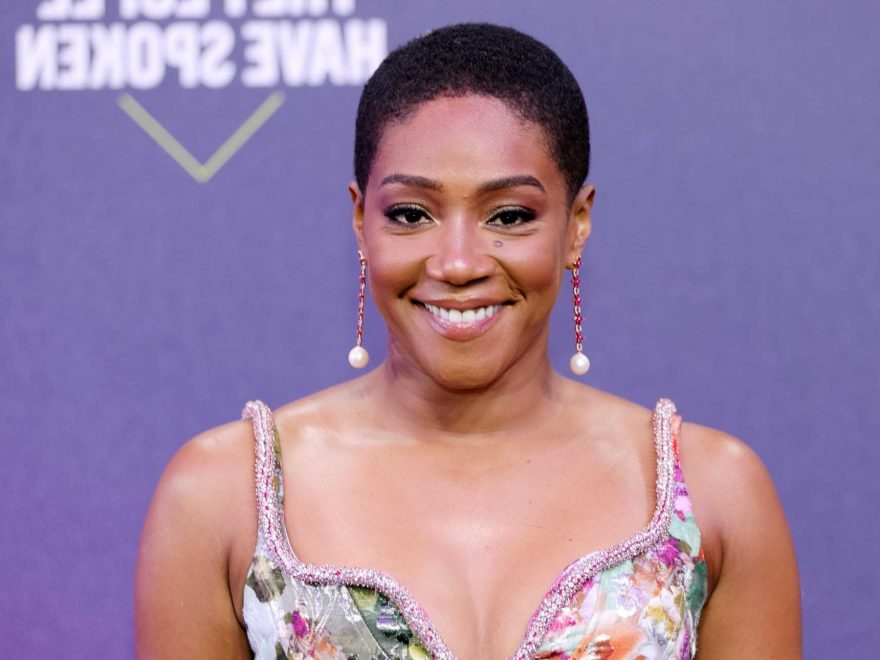 Things we can all agree on: Tiffany Haddish is a hilarious genius who should be a millionaire. Which…she is! (TBH, I would not be the least bit mad about having Tiffany Haddish’s net worth, ’cause it’s impressive.) The comedian and actress became a household name when she starred in Girls Trip alongside Regina Hall, Jada Pinkett Smith, and Queen Latifah—but she’s been acting forever, hustling hard to land roles even when she was “homeless, hungry, scared, and hurt.” And with TONS of other upcoming movies and TV shows in the works, it doesn’t seem like she’s slowing down anytime soon.

Over the next year, you can expect to see Tiffany appear in the movies Haunted Mansion, Landscape with Invisible Hand, and Girls Trip 2, among others. She’s also set to star in (and produce) a biopic about Olympic Gold-winning track and field legend Florence Griffith Joyner, aka Flo-Jo, so…we can all agree that an EGOT is In! Her! Future! In the meantime, here’s a quick recap of Tiffany Haddish’s amazing career and the friends (by which we mean the $$) she’s made along the way.

First Up, All of Tiffany’s TV and Movie Roles

Let’s see, Tiffany started out booking guest roles on shows like My Name Is Earl, It’s Always Sunny in Philadelphia, and That’s So Raven, which didn’t exactly pay a lot. (Tiffany told GQ, “[That’s So Raven] only paid, like, 795 bucks. But the residual checks are certainly nice. I got one for 2 cents the other day. They could’ve just held on to that till it accumulated at least to 35 cents.”) She then moved to a recurring TV role in The Carmichael Show and eventually pivoted to film, appearing in Keegan-Michael Key and Jordan Peele’s 2016 movie Keanu.

And since 2017’s Girls Trip, Tiffany’s career has simply exploded. She landed roles in The Oath, Night School, Bad Trip, The Kitchen, Like a Boss, and The Unbearable Weight of Massive Talent, among several others—oh, and she also currently has a major hosting gig with Kids Say the Darndest Things on CBS, plus a few Netflix comedy specials, like Tiffany Haddish: Black Mitzvah and Tiffany Haddish Presents: They Ready. And let’s not forget about her starring role on Apple TV+’s The Afterparty, which was already renewed for a second season.

So how much does Tiffany earn per project? Even though Girls Trip was the highest-grossing comedy of 2017 (it had a production budget of just $20 million and grossed more than $140 million), Tiffany told HuffPost that she only earned $80,000 for her role. She even joked about her disappointing paycheck during her 2017 SNL monologue.

“This movie made history,” she said. “It made $100 million plus—and I’m trying to figure out where is my cut of that money, because I haven’t seen it at all yet. And all my friends are telling me, ‘Tiffany, you’re big time, you’re a star now, you’re ballin’ out of control.’ And I’m looking at my bank account like, ‘Uh-uh.’”

However, it seems like her pay per project has (hopefully!) increased since then. As she joked to HuffPost, the reason Girls Trip 2 took so long to happen was because she and her co-stars “want too much money.” Yes to knowing your worth, Tiffany!!

Next Up, Her Comedy Album

Remember when we mentioned Tiffany’s Netflix comedy special Tiffany Haddish: Black Mitzvah? Well, that special won Tiffany a Grammy for Best Comedy Album in 2021, making her the first Black woman to win the award since 1986, which is when Whoopi Goldberg became the first-ever Black woman to win. It’s unclear how much she actually earned for the special (rumor has it she earned $800,000), but here’s hoping they compensated her better than the Academy would have for hosting their pre-show.

As Tiffany revealed to Variety, she was actually asked to host the 2021 Grammys pre-show, which would have been cool…had they offered to pay her. Instead, they didn’t offer her any compensation AND also expected her to pay for her own glam and wardrobe. No thx!!

“All of that would have to come out of my pocket,” she told Variety. “I don’t know if this might mean I might not get nominated ever again, but I think it’s disrespectful.” Later, she added, “I was like, ‘The exposure is amazing but I think I have enough. I appreciate you guys asking. And as much as I appreciate the honor of being nominated, that’s not okay.’”

Oh, and Her Memoir? Bestselling

In December 2017, Tiffany released her essay collection, The Last Black Unicorn, with Simon & Schuster, and unsurprisingly, it earned rave reviews. It also earned a spot on the New York Times Best Sellers list not long after its release, so it seems safe to assume it sold pretty well.

Unfortch, it also got her in a big of legal trouble with her ex-husband, William Stewart, who filed a $1 million lawsuit against Tiffany—as well as Simon & Schuster—for libel, slander, and defamation after reading the memoir. The two reportedly reached a deal in 2021, though the terms of the deal were never revealed.

In May 2022, Tiffany followed up her bestselling memoir with a children’s book, which she co-wrote with author Jerdine Nolen and illustrator Jessica Gibson. The title: Layla, the Last Black Unicorn. 10/10, would read.

In 2018, Tiffany landed her first major endorsement deal when she became the spokesperson for Groupon. She even starred in the company’s big Super Bowl commercial that year, which is when ya know you’ve made it.

A few years later, Tiffany took part in a Cadillac campaign to promote GM’s hands-free technology, and as she told Forbes, getting behind the wheel was a real full-circle experience. “I’ll never forget the first time a Cadillac SUV came to pick me up for a job,” she recounted. “And I thought, ‘That’s it, I freaking made it.'”

Again, it’s unclear how much those endorsement deals earned her, but chances are she’s made enough to buy her own Cadillac (plus a whole bunch of Groupons).

So Yeah, Tiffany Haddish’s Total Net Worth Is Major

According to Celebrity Net Worth, Tiffany Haddish’s net worth in 2022 is a v chill $6 million. Congrats to Tiffany and can’t wait to see this number continue to skyrocket.