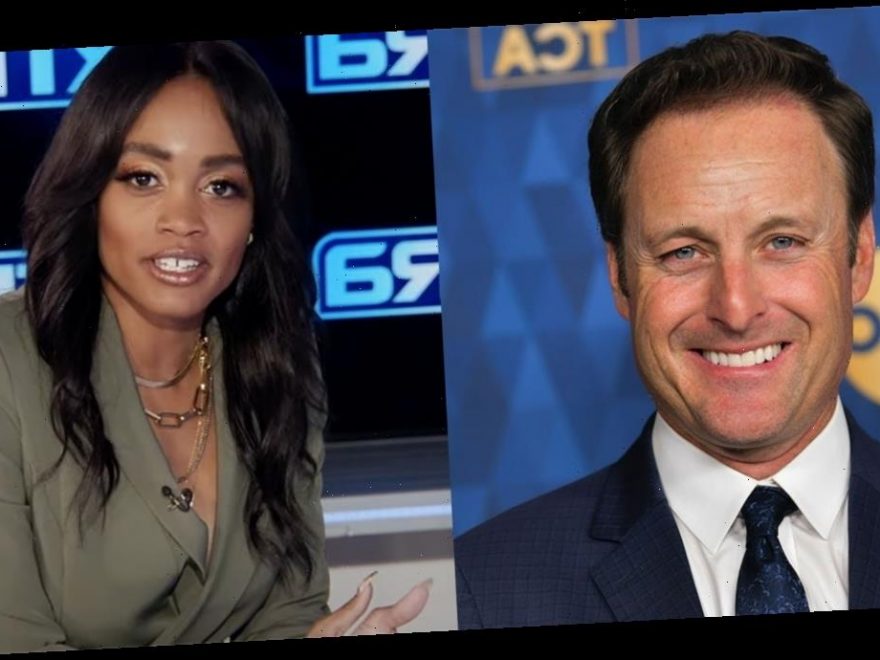 The Bachelor franchise is no stranger to controversy, but its longtime host is currently facing unprecedented backlash from fans. On Tuesday, Feb. 9, Chris Harrison appeared on Extra and spoke to Bachelor Nation’s Rachel Lindsay about claims of racism against current Bachelor contestant Rachael Kirkconnell, defending Kirkconnell and dismissing many of Lindsay’s points in the process. The media personality has since apologized for his comments, but that hasn’t stopped viewers from promoting a viral petition to fire Chris Harrison from the Bachelor franchise.

At the start of Matt James’ Bachelor season, accusations about Kirkconnell’s past behavior came out on TikTok, claiming she bullied a former high school classmate for dating Black men and liked Instagram photos containing the Confederate flag and MAGA hats. The controversy continued on Feb. 5, when photos surfaced of her attending an "Old South" plantation-themed fraternity formal in 2018.

Kirkconnell has yet to speak out about this controversy. (Elite Daily reached out to Kirkconnell via ABC about these accusations but did not hear back in time for publication.) According to screenshots shared by fan account @bachelornation.scoop on Instagram, a TikTok account that appears to be run by Kirkconnell’s sister claimed ABC has advised the Bachelor contestant to avoid responding, pointing out that Kirkconnell is still under contract with the network

Regardless of whether that is true, it’s certainly not the case for everyone in Bachelor Nation. In his Feb. 9 interview with Lindsay, Harrison addressed the racist allegations toward Kirkconnell at length. He defended Kirkconnell against the "woke police," asking viewers to give her "a little grace, a little understanding, a little compassion." When Lindsay pointed out Kirkconnell attending an antebellum-themed party was "not a good look," Harrison argued, "Well, Rachel, is it not a good look in 2018? Or is it not a good look in 2021? Because there’s a big difference." He went on to call Kirkconnell a "poor girl," deflecting Lindsay’s responses. (Elite Daily reached out to a rep from ABC for comment on Harrison’s statements made in the interview, but did not hear back in time for publication.)

Many Bachelor Nation viewers were enraged by the host’s refusal to acknowledge racism’s many forms in favor of speaking about "cancel culture," particularly given that Kirkconnell is competing on the season with the first-ever Black Bachelor.

The pushback from fans was swift, and on Wednesday, Feb. 10, Harrison posted an Instagram apologizing for "wrongly speaking in a manner that perpetuates racism" during the interview.

The host insisted his intentions were to "ask for grace in offering [Kirkconnell] an opportunity to speak on her own behalf," adding he wants to specifically apologize "to my friend Rachel Lindsay" and "thank the members of Bachelor Nation who have reached out to me to hold me accountable."

This isn’t the first time the longtime host has been criticized for racism. When E! asked Chris Harrison when the show would finally cast a Black Bachelor or Bachelor of color in general in 2018, he responded, "Sure, if someone really amazing comes along. We won’t pick one just to pick one. But if someone is phenomenal and just happens to be Black, sure!" Given how the show had 24 white Bachelors before casting Matt James, the notion that a man of color would need to be particularly "phenomenal" to warrant consideration didn’t come off especially well.

He’s also been called out for sexist comments, such as when he went on the Bachelor Happy Hour podcast on Feb. 25, 2020, and complained that "when you walk into the room as a man, you’re always wrong. Women are always in the right, men are always wrong, and we are supposed to just deal with that."

All of these instances are cited as reasons to revoke Harrison’s Bachelor hosting duties in a new change.org petition titled, "Remove Chris Harrison from the Bachelor Franchise," which has amassed over 23,000 signatures (and counting) as of Feb. 11. (Elite Daily reached out to a rep from ABC for comment on the petition, but did not hear back in time for publication.)

"Chris Harrison has a history of misogyny and racist behavior and racist-sympathizing behavior," the petition description reads. It goes on to say: "All this casting for diversity is completely meaningless unless you are willing to take out the consistently problematic person on this show, the face of the show, who will never take accountability for his actions. Remove Chris Harrison from the Bachelor franchise, or we boycott The Bachelor for good."

Fans of The Bachelor will have to stay tuned to see how this situation unfolds, but it certainly feels like a moment of reckoning for the franchise.