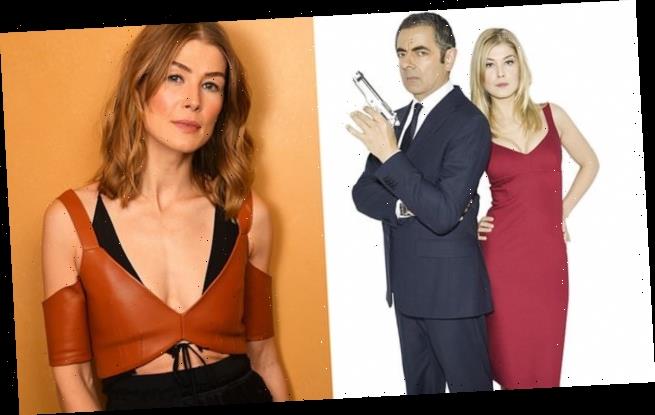 ‘They gave me breasts I don’t have’: Rosamund Pike hits out at body airbrushing after her figure was altered to make her chest appear bigger on poster of Johnny English movie

Rosamund Pike has hit out at body airbrushing after her shape was altered to make her breasts appear bigger on a film poster.

The actress, 42, warned that ‘body-tuning’ in photographs is causing people to lose their ‘grip’ on what their bodies really look like.

The British star said as well as being given a larger cleavage for the Johnny English Reborn poster, her eye colour was changed for another ad to promote Radioactive.

‘For the poster for Johnny English, my breasts were augmented,’ she said on the Kelly Clarkson Show. ‘In the poster for the character shot, I’ve got a really impressive chest. Which I don’t have.’

For Radioactive, in which she played Polish physicist Marie Curie, she said a decision was made to make her eyes brown in the poster.

She said: ‘I still don’t quite know why. Those are the obvious times, right? When you do notice, ‘Oh, I’ve got brown eyes,’ or, ‘I’ve got massive breasts’.

‘But there’s probably countless times where our image is doctored and we don’t notice it. Because I think we’re all losing our grip on what we really look like.’

Miss Pike, who played Kate Sumner, a behavioural psychologist at MI7 in Johnny English, was so irked by her photoshopped image that she successfully had the poster removed. 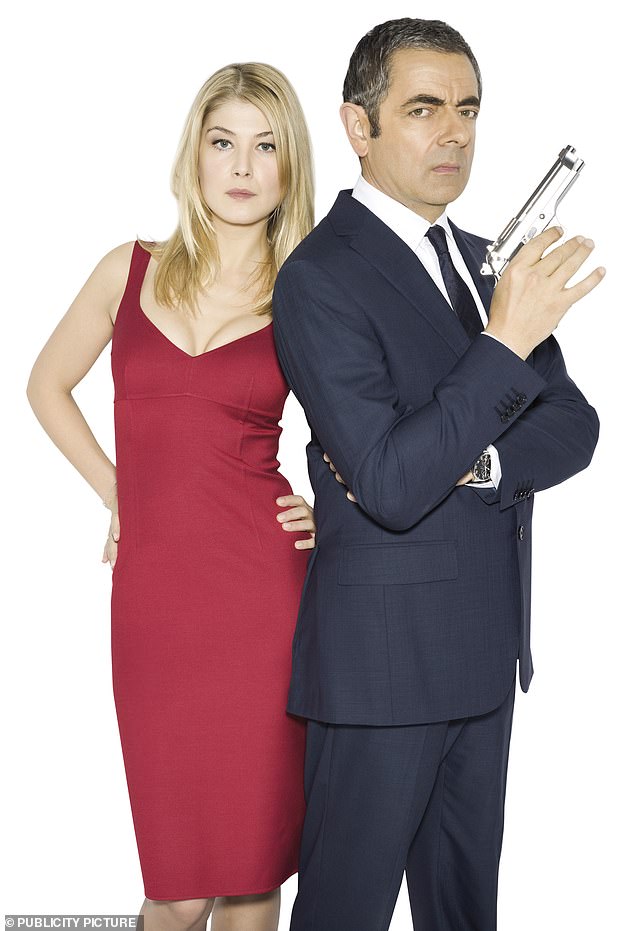 The British star said she was given a larger cleavage for the Johnny English Reborn poster. Pictured: Rosamund Pike and Rowan Atkinson

Promotional material for Johnny English Reborn showed her wearing a figure-hugging red dress with a plunging neckline as she posed alongside Rowan Atkinson, who played the film’s title role.

The Gone Girl actress – married to businessman Robie Uniacke – last year criticised lazy descriptions of her as an ‘English rose’, claiming it leaves her feeling ‘objectified’.

Keira Knightley has previously hit out at movie bosses touching up pictures of her for posters – but in this case she complained her breasts had been made to look ‘droopy’ in an image for the 2004 action-adventure film King Arthur. She said: ‘I thought ‘Well, if you’re going to make me fantasy breasts, at least make perky breasts’.’