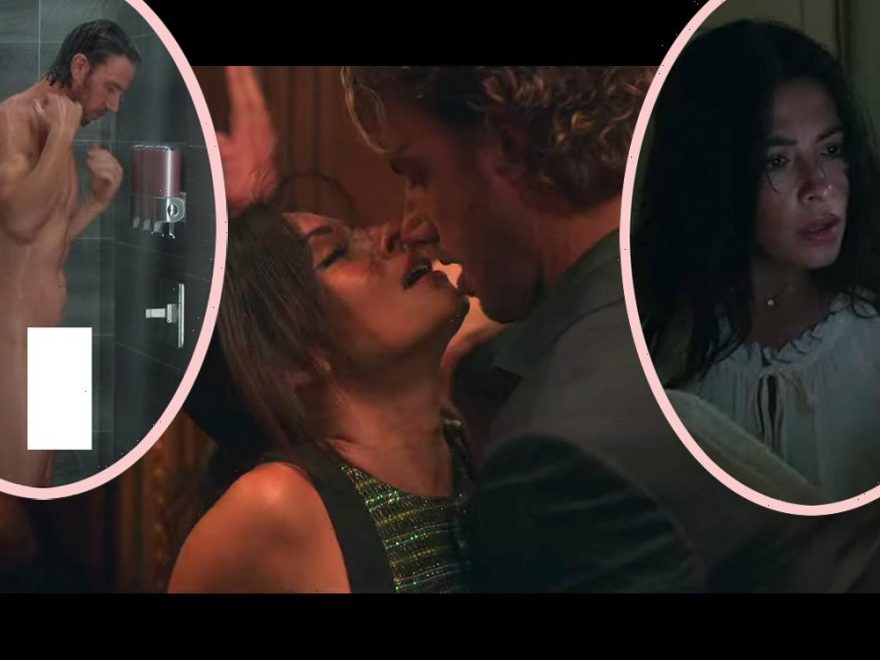 If you’re one of the millions who have already tuned into Netflix‘s latest hit, Sex/Life, you already know the show is full of surprises.

The first time it popped up on our radar, for instance, was the shocking moment they showed that full frontal shower shot, featuring a penis so big it left viewers as confused as they were turned on.

Well, the verdict may still be out on whether the sexy star’s package is the real deal, but you know what is? The plot!

That’s right! Sex/Life is based on a true story! (And no, we don’t mean the romance that developed between stars Adam Demos and Sarah Shahi, who started dating in real life during filming.)

If you didn’t know, the steamy relationship drama about a married woman who can’t stop thinking about her ex is an adaptation of the memoir 44 Chapters About 4 Men, in which B.B. Easton writes about her own sexual misadventures. The hottest part? In the book, it’s not just one well-hung Aussie but three exes: “a tattoo artist turned U.S. Marine turned motorcycle club outlaw, a baby-faced punk rocker out on parole, and a heavy metal bass player” per her own description on Amazon.

Three?? That would be enough for far more than a season’s worth of sweat-inducing streaming content!

The fourth man, of course, was the school psychologist’s husband. As she writes, she assumed her “gorgeous, cold, number-crunching husband simply wasn’t capable of the kind of passion” her exes were. So she decided to recall it in detail and write about it to get her fix. As she wrote in the first chapter:

“The man is at least ninety percent perfect for me, but lately, all I can think about is the less-than-or-equal-to ten person that’s missing: passion and body art. Two things I need to mourn and move on from in order to protect my lovely, monotonous marriage. But I can’t.”

B.B. began the project not for publishing but as a journal in which she wrote about her former relationships — yes, just like Billie does in the show.

Speaking to Oprah Daily about the book, the writer explained:

Wait, Billie’s husband finds the sex journal in the show — so did the author’s husband actually find it IRL? Yup!

And like in the show, her hubby’s first response? He “upped his f**king game.” But things got even more twisted as she started writing journal entries specifically to manipulate him…

While not everything went perfectly with her little literary sex game (you have to read the book to find out!), the show did make a major change.

In the book, B.B. never gets with an ex-boyfriend. While all the drama about longing and jealousy is there, the three sexy exes are NOT.

On the show’s twist to have Billie return to Brad, at least temporarily (who knows where it will go next season), the mother-of-two explains:

“It’s the same undertone of the book. Is there something better? Does it get better than this? She’s exploring the same question… it ramps up the drama.”

Aside from enjoying the different direction as the story evolves into something else for serialized TV, she said she and her husband — who are still together — are also enjoying seeing versions of themselves played by incredibly hot actors! She laughed:

“Seeing these gorgeous supermodel humans on a screen portraying characters based on my husband and myself while we’re sitting on our busted, 12-year-old couch in our sweatpants, quarantine day 587… we’re just so tickled. It’s been an absolute dream come true that I didn’t even know I had.”

Seems like fodder for a steamy sequel! The Netflix Diaries!

Are YOU going to check out the book to hear the full real story behind the show? Is it hotter to have memories of three bad boys to think about?? Let us know in the comments (below)!