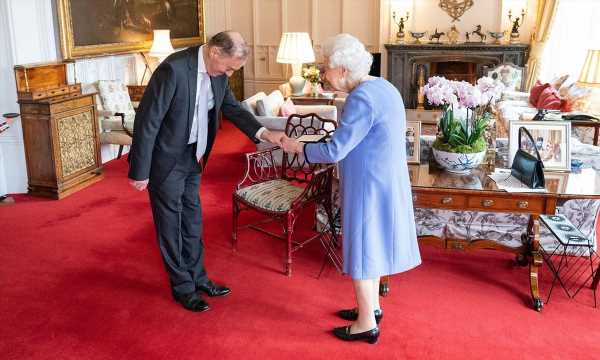 The Queen appeared to share a previously unseen photograph of her great-grandchildren as she carried out a face-to-face audience at Windsor Castle on Wednesday.

The sweet snap could be seen behind the monarch next to her signature black handbag on a console table.

WATCH: The next generation of young royals

It looks to show Her Majesty and her late husband, the Duke of Edinburgh, posing for a photograph with five of their great-grandchildren. Princess Charlotte appears to be sitting on her great-grandmother’s lap, while big brother Prince George stands behind the sofa in a navy collared jumper.

The previously unseen portrait could be seen on the table

Meanwhile Peter and Autumn Phillips’ eldest daughter, Savannah, seems to be standing next to her great-grandfather, wearing a mauve coloured dress, while younger sister Isla is at the opposite end. Mike and Zara Tindall’s eldest daughter, Mia, looks to be sitting in the middle, in a navy collared dress.

The ages of the children in the photograph suggest it was taken before 2018, as Prince Louis and Lena Tindall do not appear to be present.

Another photo of the Queen’s great-grandchildren can also be spotted next to a vase of flowers. The touching image was shared by Buckingham Palace ahead of the Duke of Edinburgh’s funeral in April. It was taken in Balmoral in 2018 and also features Louis and Lena as babies.

MORE: Why Kate Middleton is set for a special month in January

During her audience, the Queen presented the concert organist, Thomas Trotter, with the Queen’s Medal for Music award.

The award is presented annually to a musician who has had a major influence on the musical life of the nation.

Make sure you never miss a ROYAL story! Sign up to our newsletter to get all of our celebrity, royal and lifestyle news delivered directly to your inbox.