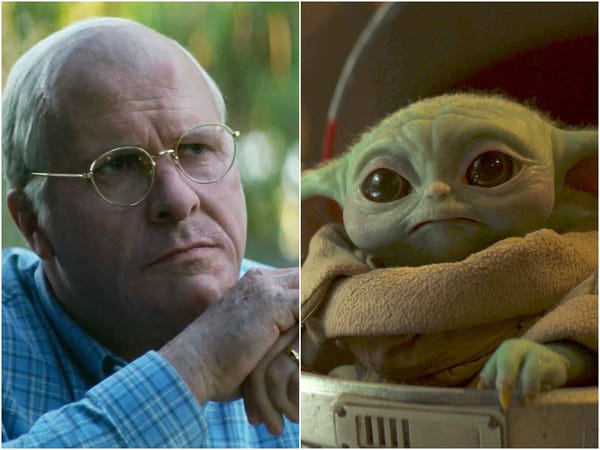 Greig Fraser, the Emmy-winning cinematographer behind "The Mandalorian," told Insider that shooting Baby Yoda was similar to shooting Christian Bale in "Vice" and Steve Carell in "Foxcatcher."

Fraser, who won an Emmy on Wednesday alongside Barry Baz Idoine for their cinematography for the Disney Plus show, said that shooting Baby Yoda was "the same as when you shoot someone with prosthetics."

"Rubber looks different to skin and it's very, very hard to make a prosthetic on a human look convincing if you don't light them correctly," Fraser said before referencing two best picture-nominated movies that he shot that featured extensive prosthetics on the actors involved.

"I did 'Vice' with Christian Bale and 'Foxcatcher' with Steve Carell — both of those films had significant prosthetic work. You do need to be cognizant of the fact that the material that you're photographing is not skin."

In Bennett Miller's 2014 movie "Foxcatcher," Carell wore prosthetics to play the real-life millionaire John Du Pont, who spearheaded the Schultz brothers attempt to compete in the 1988 Olympic games. Carell was unrecognisable as Du Pont, and earned an Oscar nomination for best actor.

Fraser explained that you can only shoot these prosthetics in certain ways with certain lighting, otherwise, it will very obviously look like movie magic on screen as opposed to the realistic look the filmmakers hoped for. And it was the same with Baby Yoda, even if he is an alien creature.

"Thankfully with The Child, he didn't have normal human skin — so there were a few liberties that could be taken there. But he was still also a puppet."

Fraser is a big fan of Baby Yoda and the memes The Child has spawned since debuting in season one "The Mandalorian" ("every time I see one I'm like, 'That's awesome!'"), and says he and creator Jon Favreau worked on maximising his cuteness.

"One of the the things that Jon identified very early on was that The Child has this little peach fuzz hair which is quite cute," Fraser said. "Jon was a strong supporter of giving The Child a bit of backlight to lift up that peach fuzz hair. What that does is it helps create a bit of three dimensionality to The Child. Trying to make sure it gets enough eye light because it's got big beautiful eyes, basically trying to make it as beautiful and charming as possible."

It's safe to say that Fraser and Favreau's mission was pretty successful. The season two trailer of "The Mandalorian" has already spawned fresh new memes of Baby Yoda, while the upcoming release of season two on October 20 will undoubtedly give the world more.

Fraser, who also shot "Rogue One" and earned an Oscar nomination for the 2017 Dev Patel drama "Lion," isn't returning on season two, but is content with the three episodes he shot on season one (chapters one, three, and seven).

The Australian director of photography also has his hands full shooting another iconic character — Robert Pattinson's Batman. Fraser is shooting both that and "Dune," so could well add a second Oscar nomination to the Emmy he has just won for capturing Mando and Baby Yoda on screen.

Fraser, sadly, said he has to remain tight-lipped on both "Dune" and "The Batman," despite two exceptional trailers, and a tease that Robert Pattinson is a "master actor" as Bruce Wayne/Batman.

"Robert Pattinson is an incredibly gifted actor. Every role that Pattinson plays is a contender for an acting award," Fraser said when asked if Pattinson could win an Academy Award as Joaquin Phoenix did for "Joker" earlier this year. "I've seen him in so many incredible movies, and watching him work — he is a master actor. Always a possibility."