Products featured are independently selected by our editorial team and we may earn a commission from purchases made from our links; the retailer may also receive certain auditable data for accounting purposes.

Few things are more satisfying than a cold drink in the great outdoors. But whether you’re relaxing at the campsite, tailgating or just spending a day at the beach, you’ll need a great outdoor cooler to enjoy those cold drinks.

If you’re not much of an outdoorsmen (or you’re currently upgrading your outdoor gear), you might be surprised by how quickly coolers have evolved over the past couple decades. High-end brands such as Yeti have transformed the classic ice chest into ultra-durable coolers that keep ice for over a week. The best outdoor coolers from these innovative brands can withstand summer heat, rugged terrain and even bears (no, seriously) while keeping food and drinks cold.

This makes now a better time than ever to invest in an outdoor cooler. They’ll become an essential on camping excursions, family road trips, tailgates and day trips, ensuring that everyone stays happy with cold refreshments.

What Makes a Good Outdoor Cooler?

Insulation: Insulation – the most important feature of a cooler – is also the most difficult to assess while shopping. Most brands will claim that their coolers can retain ice for a certain number of days (often five to ten days) but that might only be true when the cooler is unopened and kept in mild weather. To nail down the actual insulation powers of our chosen coolers, we did some research on brands and cross-referenced our own experience with user reviews.

Durability: As with most outdoor gear, coolers are bound to get knocked around a bit. The best outdoor coolers should be able to withstand hectic unpacking, dragging around at the campsite and a camper (or two) in need of a place to sit. The best way to figure out a cooler’s ruggedness is by checking out the build materials, with rotomolded plastic being the highest quality option.

Size: Most coolers range from about 25 to 100 quarts. For a large group of campers (say, more than five people) or longer trips (maybe a week) go for a cooler that’s larger than 50 quarts. We’re also believers that more cold drinks is always better, so even if it’s just the family on a weekend trip, it won’t hurt to upsize a tad.

Mobility: Ice and drinks can get heavy, so you’ll want a cooler than can be carried (or even better, rolled) with ease. Coolers that are lightweight with wheels will be best – especially for one person to move around.

What Are The Best Outdoor Coolers?

Yeti has quickly become the best cooler brand since its foundation in 2006. Yeti’s success boils down to lasting insulation (that actually holds up during real use) and a virtually indestructible build. As proof, Yeti says it had an actual bear try to open the Tundra cooler and a 500-pound man try to destroy the cooler. Neither succeeded.

The secret to the Yeti Tundra’s durability is a rotomolded polyethylene plastic construction (like a kayak). This means the Tundra is airtight, lightweight and doesn’t have seams that can bust. Yeti also uses a thick, pressure-injected foam lining to keep drinks cool for several days. Add some wheels with this Haul model and you have the best outdoor cooler around. 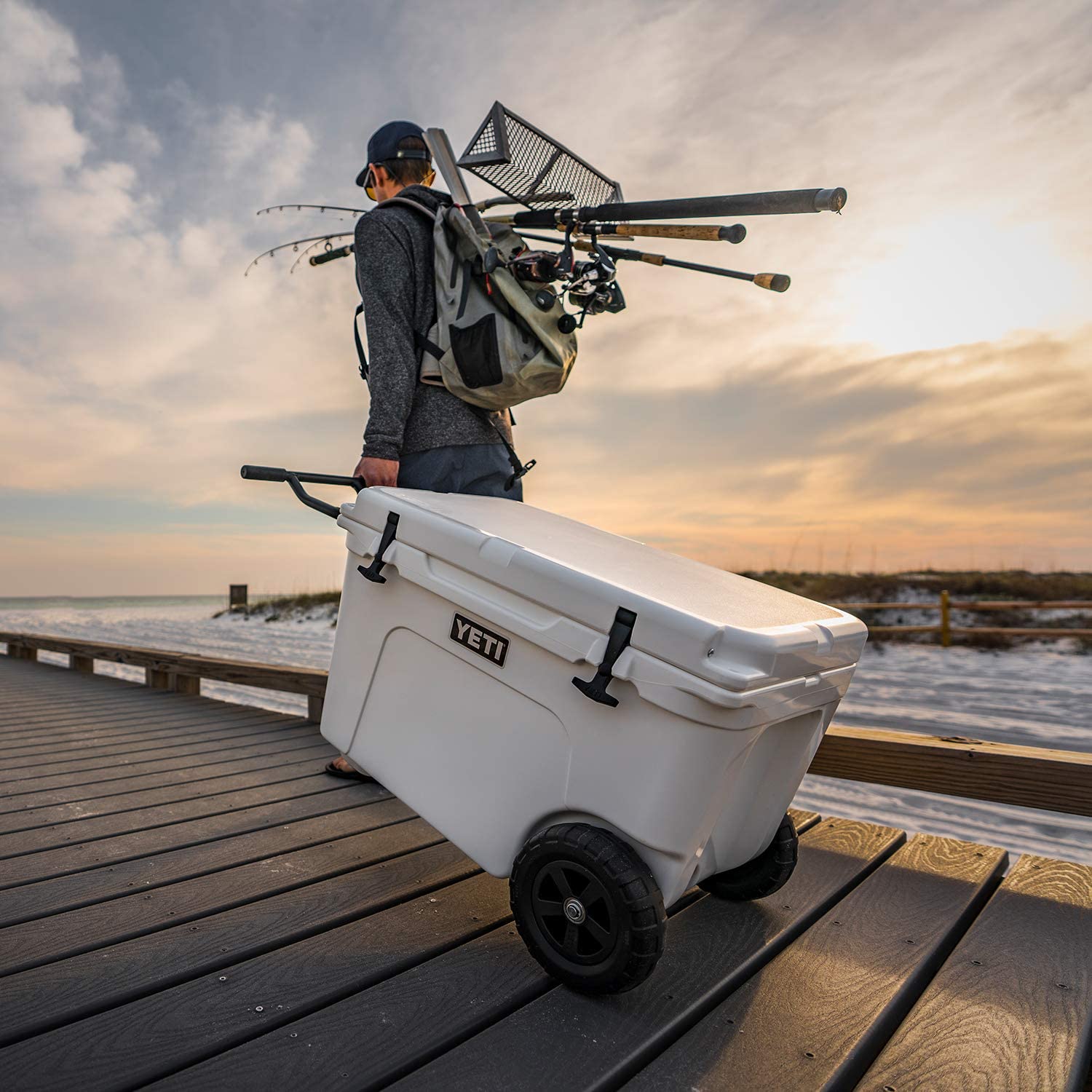 Another high-end cooler brand with plenty of well-deserved praise is Pelican. The American brand’s coolers are all made here in the U.S. and come with an incredible lifetime warranty which guarantees a replacement if your cooler breaks.

Pelican is known to be upfront about their coolers’ insulation. This Elite cooler boasts eight days of ice retention, and unlike many insulation claims, that’s under real-life use. Durability is also top-notch with a rotomolded polyethylene (similar to the Yeti) that’s also been tested against a real bear as well.

The cooler is decked out with some handy features including a bottle opener, four self-draining cup holders and a measuring board on the lid. We also like the Pelican Elite because you can get the roller model in this large 80-quart version, making it suitable for large groups and extra thirsty campers.

This BMX cooler from Igloo isn’t as high-end as the Yeti or Pelican but still delivers very impressive specs that make it a worthy contender. On the exterior, you’ll find a rugged blow-molded construction with a reinforced base, plus a measuring board on the lid. The BMX cooler also comes in a good range of sizes including 25, 52 and 72-quart, offering enough options for personal use or larger groups.

Igloo doesn’t claim long-period insulation, but what they do claim is pretty impressive: five-day ice retention in 90-degree heat. This means it’ll keep everything cool during a weekend camping trip – even in the summer. Another notable insulation feature is Cool Riser Technology which elevates the base of the Igloo away from the hot ground. 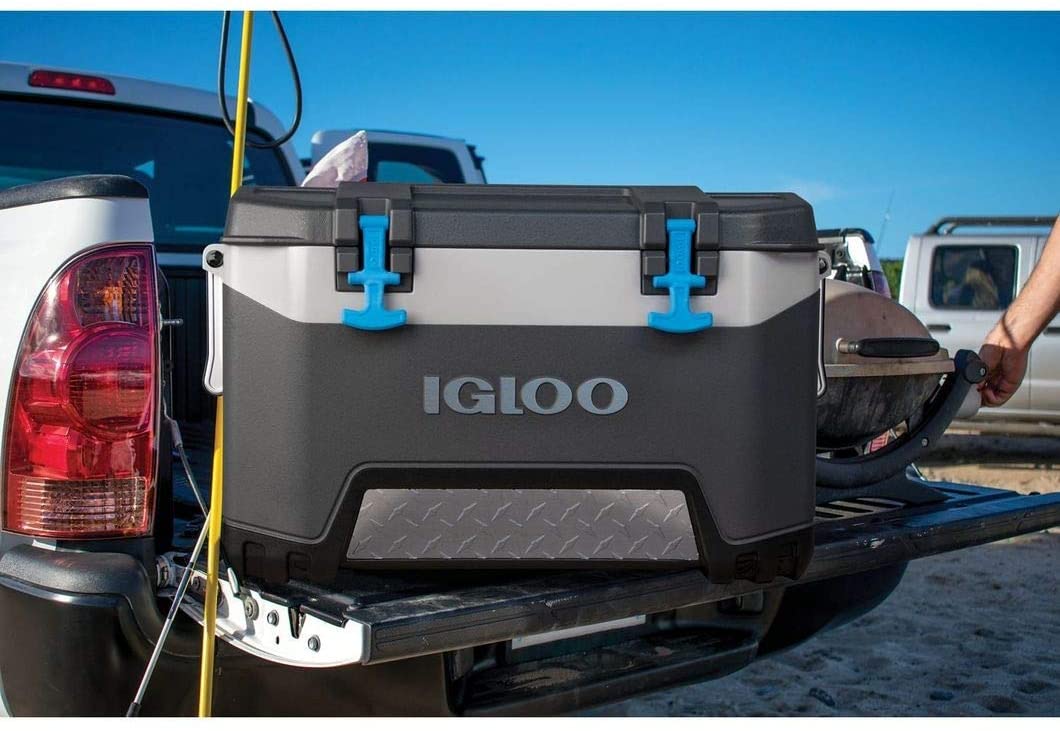 If you’re looking for something a little smaller, check out the Engel Eng35. The 35-quart capacity will hold about 24 cans, plus ice, making it ideal for day trips to the beach, park or tailgate. However, it could still manage a short camping trip if necessary.

Engel uses a high-quality rotomolded plastic construction for exterior durability (yes, it’s also been bear-tested) and foam lining throughout the sides, bottom and lid for insulation. Engel claims that this will retain ice for 10 days, but under real use it’s good for about five or six days.

This Eng35 also comes with the peace of mind you get from Engel. The brand has been around since 1962 and invented rotomolded coolers (for reference, the modern cooler was invented in the 1950s). Plus, Engel offers a handful of fun colors to liven-up your campsite or tailgate. 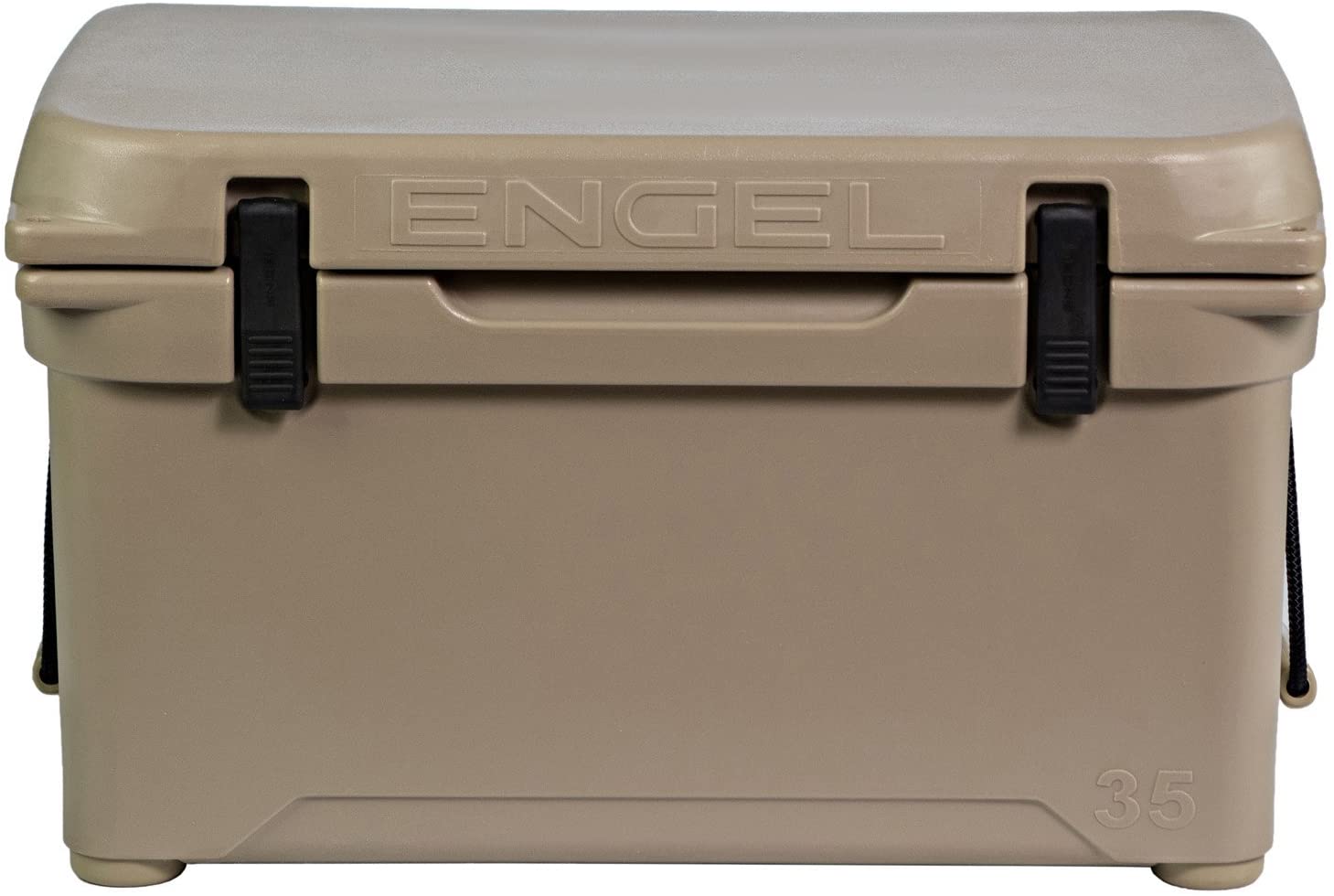 Another modern cooler brand worth considering is Orca. The Tennessee-based brand was founded quite recently in 2012 but has made a big splash (no pun intended) in the cooler market.

This 40-quart Orca cooler offers a good balance of mobility and space with more than enough room for 24 cans, plus some food or extra bottles. And despite the Orca’s streamlined look, it’s actually very durable thanks to a rotomolded build. It doesn’t have wheels, but carrying the cooler is fairly easy thanks to a light 27-pound weight and two sturdy handles. 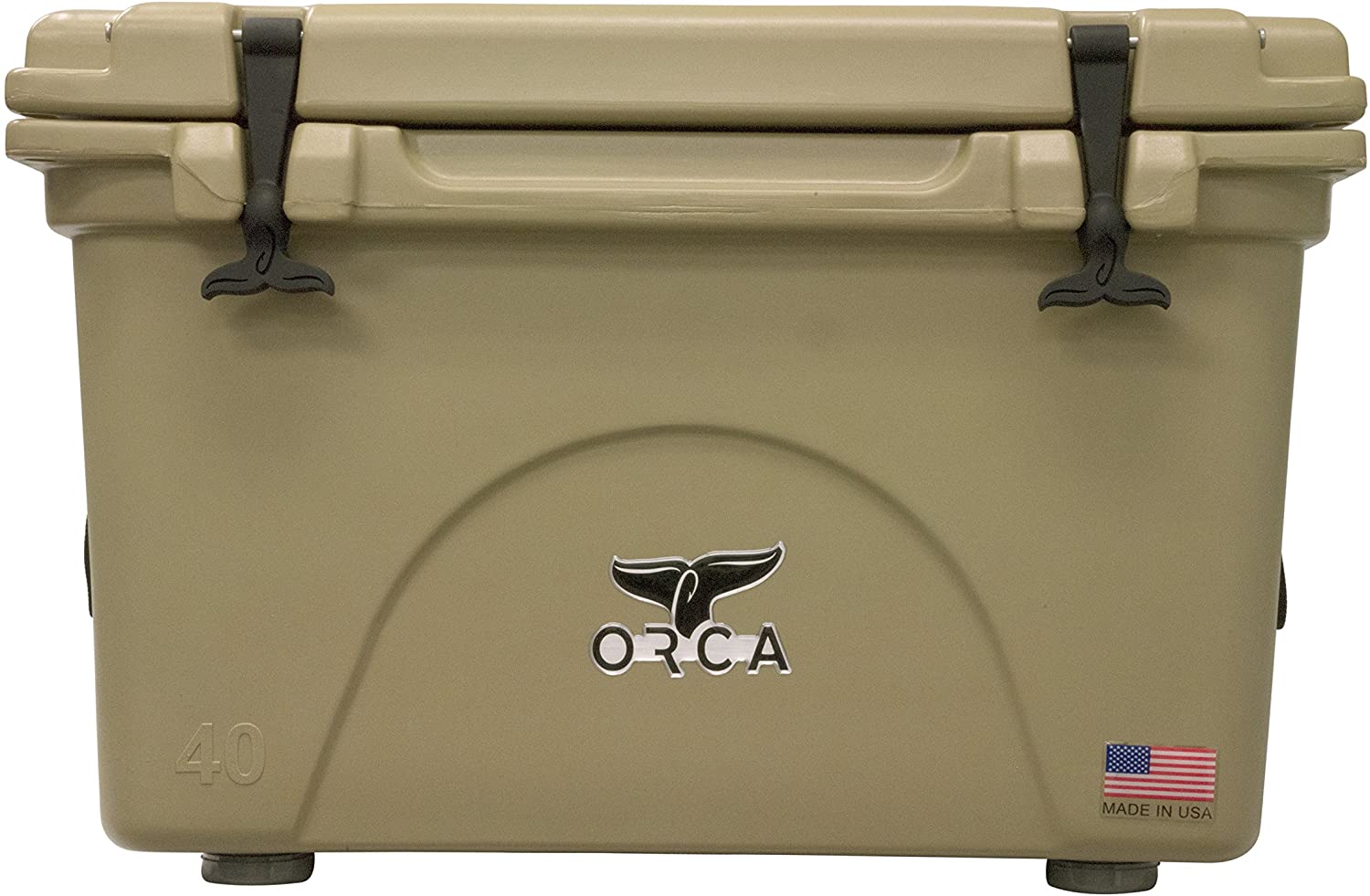 For the most high-tech campsite or tailgate (plus the coldest drinks and food) check out this powered cooler from Dometic. The cooler is controlled using a built-in interface or through your smartphone via an app, allowing you to change the temperature and monitor performance from your camping chair. And with a massive 99-liter capacity, you can store up to 153 cans or food for the whole family.

We had two main concerns about buying a powered cooler – durability and power consumption – but Dometic has assayed these worries. The cooler features an ExoFrame to keep the electronics safe, while a compressor ensures efficient power consumption. The Dometic also has a three-stage dynamic battery that keeps your car’s battery safe while powering the cooler. 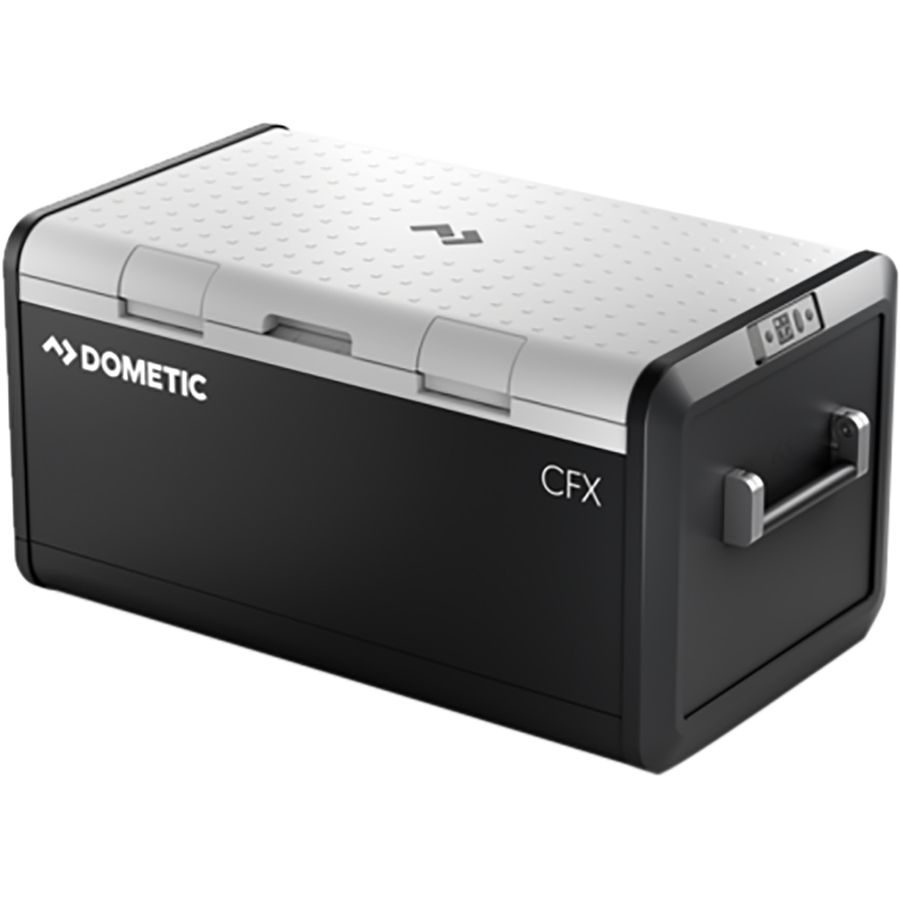 If you need a compact cooler for picnics and day trips to the beach or park, we recommend this Hopper cooler from Yeti. The tote-shaped cooler can be slung over a shoulder or carried with one hand, but it still boasts a 30-liter capacity (or enough room for about 24 cans plus ice).

As with all Yeti products, the Hopper is very capable of keeping drinks cold and secure with high-quality insulation and a rugged build. The DryHide shell is waterproof and protective against drops or bumps, and the interior lining is leakproof. The large top opening is also leakproof thanks to magnetic closures. 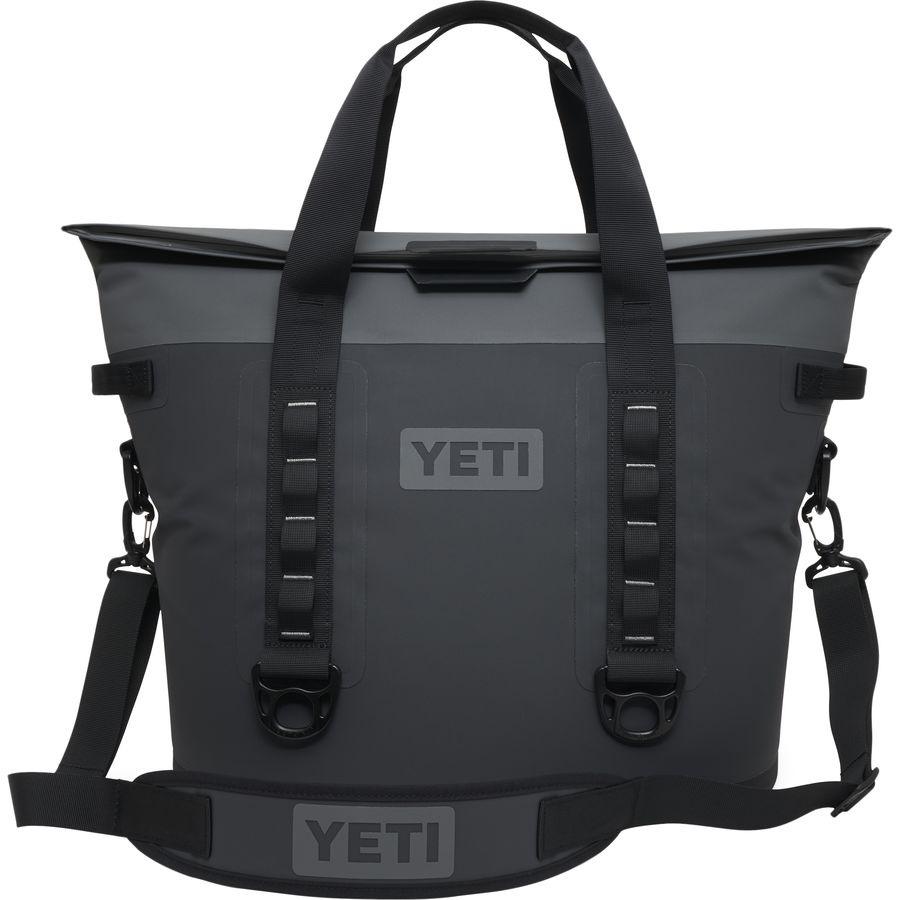 Looking for a large, old-school cooler to knock around? Pick up one of these 100-quart coolers from Coleman. The build is a simple insulated synthetic that weighs in at just 18 pounds, making it far lighter than premium rotomolded coolers. This minimal weight, plus wheels makes the Coleman very easy to transport despite its large 160-can capacity.

Coleman claims that the Xtreme cooler will retain ice for five days in 90-degree heat, which is pretty impressive despite its less-than-high-tech construction. The cooler can also support 250 pounds on its lid, allowing a large person or two smaller people to have a seat. Overall, it’s quite durable, although certainly not as rugged as high-end rotomolded coolers. 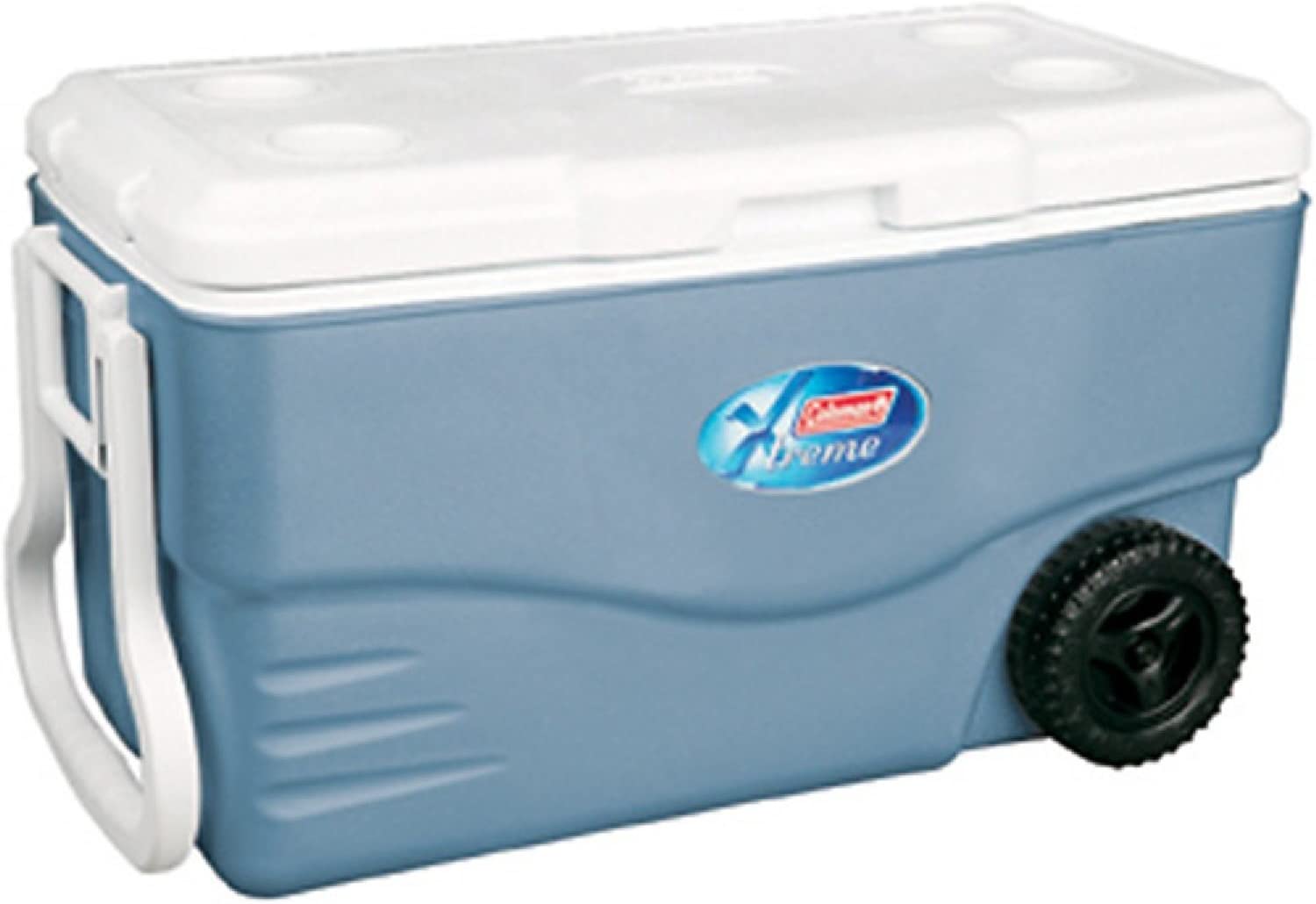