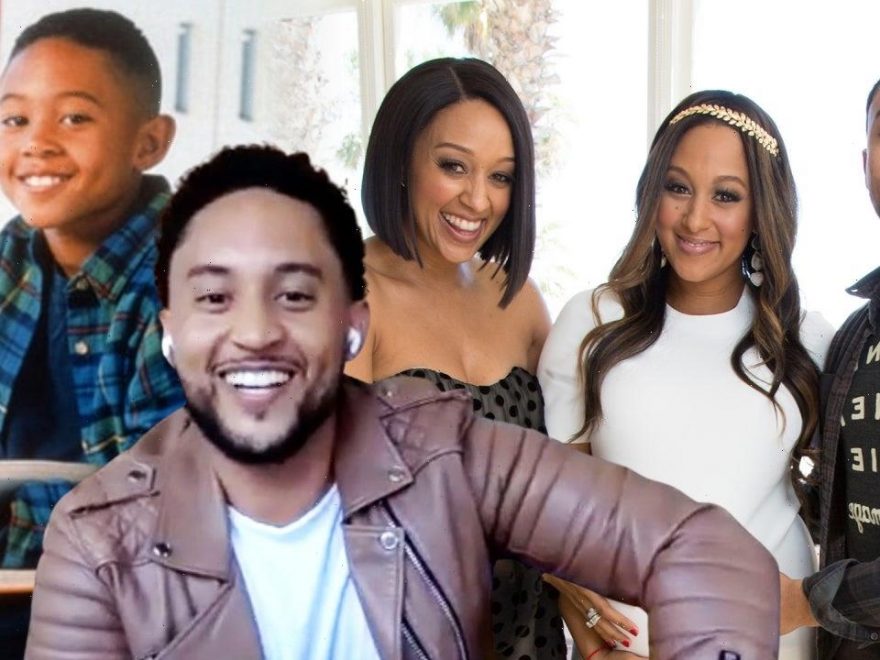 Tahj Mowry is showing a whole new side of himself with his new movie, Welcome Matt, and spilling new details about reviving the classic sitcom that put him on the map, Smart Guy.

The 35-year-old actor stars as Matt, a writer-director who, after a traumatic incident, suffers from agoraphobia, the fear of stepping outside. As Mowry tells ET’s Deidre Behar, the film has a “great balance of comedy and drama.”

“Matthew Hillard is a writer-director who gains a little bit of fame and recognition from a movie he did called Life’s A Beach. So in the process of gearing up for his next film, there’s a lot of pressure on him to sort of meet the expectations that the first film met,” Mowry details. “He goes through a very traumatic experience and we find out what that experience is in the film. It sort of derails him completely.”

“It’s really funny, but it’s also pretty intense at times. So I think it’s got a great balance of the comedy and the drama,” he notes. “That’s one of the reasons I wanted to do the role because, A, what it’s speaking [about] and what it’s bringing awareness to. But also it’s a chance for people who may know me already to see me in a different light.”

Just like Matthew, Mowry has felt compelled to take a step back from Hollywood and pump the breaks. Acting since the age of four, the actor is no stranger to the spotlight.

“I do that often and I think it’s good for me and for my mental health, for my family life, to step back and take breaks,” he expresses. “I kind of like to leave space between projects. Like after I finished Baby Daddy, I kind of disappeared for a little bit. Now here I am, and I think that’s healthy. I think it helps to separate the Hollywood glitz and glamor from real life. So I try to do that as often as possible.”

And sometimes, after a nice break, there’s even the possibility of revisiting old roles. Mowry confirms that a Smart Guy reboot is in the works, spilling details on the status of the project. The actor led the beloved sitcom from 1997 to 1999, starring as the “pugnacious little shorty with a thousand IQ” T.J. Henderson.

“There’s been lots of Zoom meetings and talks about this, so we do have the ball rolling on it. It’s just a matter of time and timing, but we do have the possible home for it,” he teases. “We do have a writer, and I feel like I came up with a really fresh take on how we can bring that back with the whole cast and something that is fresh and new. But also something that the diehard fans will still get that nostalgic aspect of it as well.”

Mowry says that in a perfect world “you will see the whole cast,” which included John Marshall Jones, Jason Weaver, Essence Atkins and Omar Gooding. “But we’re not at that stage yet where we’re checking everyone’s schedule. We’re still in the pre-phases. So that will come. But if all goes according to plan, everyone will be in it.”

Mowry has connected with Jones and Atkins, who he recently reconnected with while working on a new pilot together. As for where fans might find T.J. in present day, he says, “You will find T.J. just as he was in the original, a fish out of water. He was sort of exploring a new world for himself. You’ll find him in that same situation, but somewhere else. So I’ll just say that.” He also acknowledges that T.J. is now of legal drinking age, and playfully adds with a laugh, “You’ll be able to see him, maybe, have a tequila on the rocks.”

After all these years, and after being on Full House, voicing Wade Load on Kim Possible, making appearances on his twin sisters Tia Mowry and Tamera Mowry-Housley’s show Sister, Sister, and a slew of other shows and movies, Mowry has stayed grounded.

The actor shares that the reason why he feels he avoided the typical pitfalls of childhood stardom is because his faith and family helped him stay focused.

“I wouldn’t have done those things if it weren’t for our amazing parents. I got to give it all to them,” he marvels. “I was going back to public school after I was on set. So I think that helped me stay normal and to realize that it was just a job. It wasn’t my life. It was a job that I did, that I’m very thankful I still get to do. But I went home afterwards, then hung out with my friends and went to football and track practice and had homework, just like all the other kids do. So I definitely think that was a huge, huge reason why I am somewhat normal.”

Mowry recently reunited with his siblings, Tia, Tamera and brother Tavior, after spending time apart amid the pandemic. Tia and Tamera also had an emotional reunion after being months apart. “I love that they’re wombmates. It was honestly really beautiful,” Mowry says of his sisters’ getting together. “My brother and I joke around all the time, because when they’re together, no one else matters…But it was beautiful seeing them, and god, you could just tell how much they missed their sister.”

He also shares what goes down in their family FaceTime and group texts, hilariously revealing that they poke fun at one another and “no sibling is safe!”

“We have a FaceTime thing that we do with all the siblings called Sibling Love and all four of us get on FaceTime together. We try to do it as often as possible,” he says. “We have group chats on texts and we have a group chat on Instagram, we have our FaceTime group chat, so we’re always together…We’re all jokesters so we all get on each other in a fun way. Nobody’s safe in the group chat.”

With his siblings married and having their families, does it make him want to start his own brood? While Mowry is single — “And it’s like that for a reason,” he interjects — he adds that he hopes to get married one day, “have children with a beautiful wife, but I’m not in a rush.” “I also want to make sure that my mind is right, mentally,” he explains. “That I’ve taken enough time to give myself the love that I need to be able to give it to that special lady in the future. But I do want to be a dad at some point. I love kids.”

Up next for Mowry is checking off another thing on his bucket list. “I wrote a screenplay. And this summer we’re gearing up to go into production on that, and it’ll be my directorial debut,” he shares. “So I’m very, very excited.”

“Directing is something that I’ve wanted to do since I was a kid…I’m excited to get behind the camera, especially for something that I co-wrote,” he relays, adding that it’s an intellectual horror film. “More of the psychological, supernatural world. It’s going to make you think…It’s a blend of Get Out and Skeleton Key and that’s all I’ll say about that.”

Expect to see more of Mowry in the near future. See more of ET’s conversation with the actor in the video above. Welcome Matt is now in select theaters and available on VOD.