Katie Holmes and her look-alike daughter Suri Cruise were all smiles on a walk in the SoHo neighborhood of New York City.

Suri Cruise, 15, took another stroll with mom Katie Holmes, 43, in New York City on Sunday, March 20. The mother-daughter duo were seen walking side-by-side in the SoHo neighborhood with big smiles on their faces. Suri, whose dad is Tom Cruise, looked particularly happy to be out and about with her famous mother. The teenager was visibly laughing as she pulled down her orange face mask to enjoy a sip of her coffee. Katie could similarly be seen grinning underneath her black face mask. 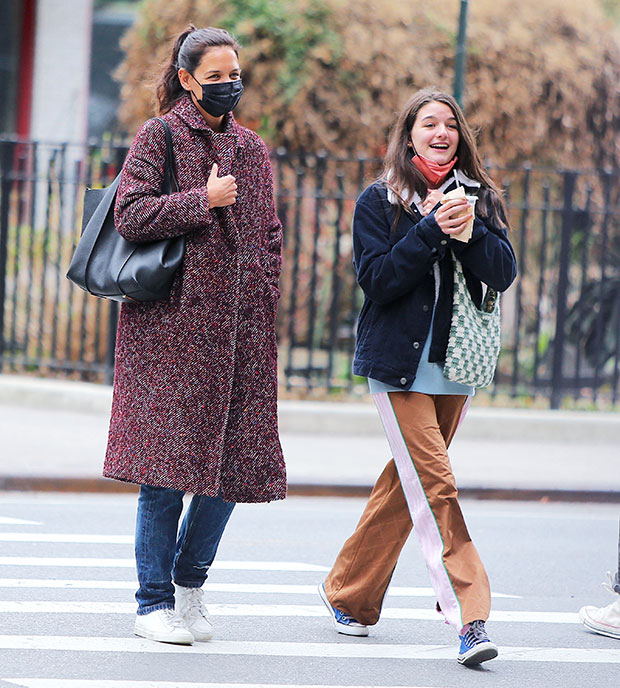 Both Katie and Suri had on simple but stylish outfits for their afternoon outing. The Batman Begins actress rocked a cozy purple coat, denim jeans, and a pair of white sneakers. Katie held her black purse on her right shoulder on the walk with her daughter. Suri, meanwhile, looked super cute in a blue jacket, brown and white pants, and a pair of blue sneakers. The teen also sported a small green-and-white patterned purse.

Suri’s frequently seen walking around her home city with her mother. On February 9, they were seen wandering NYC in matching cream cardigans. Suri and Katie are such New York City fashion staples with their chic outfits. Suri also tends to be photographed taking her adorable dog for walks. 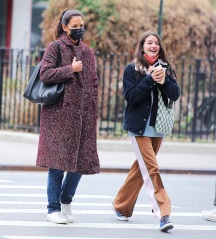 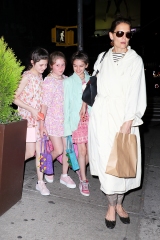 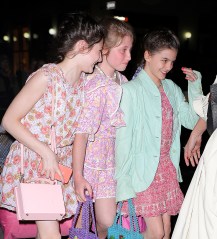 Katie and Suri have been Big Apple residents ever since the actress got divorced from Tom, 59, in 2012. “That time was intense,” Katie told InStyle in 2020 about her and Suri’s big move. “It was a lot of attention, and I had a little child on top of it. We had some funny moments out and about in public. So many people I didn’t know became my friends and helped us out, and that’s what I love about the city.”