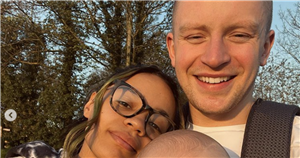 Strictly Come Dancing star Adam Peaty has admitted that missing his son's first birthday because of his commitment to the show "didn't go down too well".

The Olympic swimmer has been delighting Strictly viewers with his impressive moves alongside his professional dance partner Katya Jones.

However, sacrifices need to be made for the glitz and glamour, which the 26 year old was forced to learn the hard way after missing his son George's milestone first birthday.

Revealing that they were "filming that day", Adam explained: "We wrapped at 10.30pm, so I drove straight home, ready to celebrate it the next day."

The athlete added: "It didn't go down too well, but that's the difficult thing when you do this. Everyone has to understand."

Adam added that his girlfriend Eirianedd Munro was completely supportive of his Strictly endeavours and "wanted me to be challenged, and she knew that if she supported it, it would make it easier for me."

Gushing about his young son, the star said he "hopes" he'll watch his performances on Strictly when he's old enough.

Lastly, Adam opened up about his pairing with "strict" Katya, who he admitted has been making him rehearse up to twelve hours per day.

Adam took to the dance floor in his debut dance with a steamy, high-energy cha-cha-cha with Katya. They scored the second-highest mark of the 15 couples.

However, this week, they performed a Rumba to I See You by Leona Lewis but ended up at the bottom of the leaderboard.

Meanwhile, speaking previously to The Times Magazine, Adam revealed that he met his girlfriend on the dating app Tinder.

He said that she got pregnant just two months after they first met.

"Obviously, it wasn't planned. I got the call in Australia, with her crying. I was like, 'OK, this is going to change my life forever,'" he said.

Adam continued: "I was like, I'm not prepared to be a father.' I'm very selfish. I'm an athlete. The best athletes in the world have to look after themselves first."