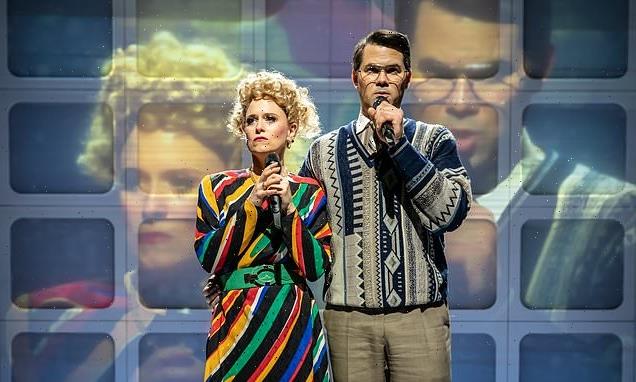 I prayed that next time I see a musical about Tammy Faye where I might actually learn something about the woman behind the big hair and extra thick mascara.

Sadly, the Almeida’s new show is at best an ecstatic but otherwise unholy fusion of TV’s Strictly and Songs Of Praise.

With the title role giddily played by Katie Brayben, the 75-minute first half is devoted to the practicalities of Tammy and first husband Jim (Andrew Rannells) building their Christian PTL (Praise The Lord) channel, inspired by Billy Graham. 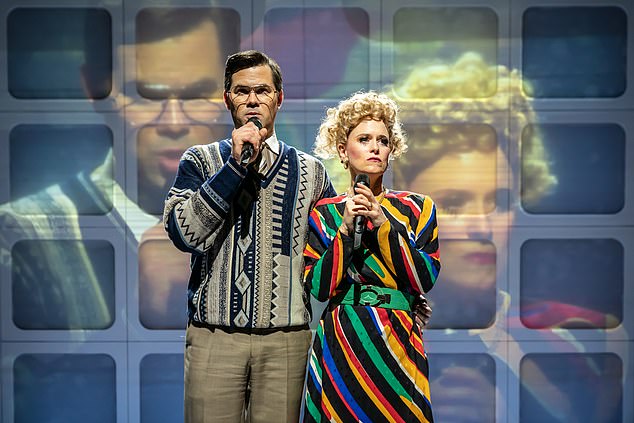 There is talk of ‘putting God’s vision into television!’ And there is the shock of Tammy winning the ratings war.

But James Graham’s story shows little faith in Tammy herself until the second half, when she does her famous interview with gay pastor and HIV victim Steve Pieters — for which she was condemned by religious fundamentalists.

This includes the sado-masochistic flagellation of Jesus bearing his cross in a scene sending up the Christian theme park they named Heritage USA, which ultimately sank Jim and Tammy’s world in debt and scandal.

Brayben (who won an Olivier award for playing Carole King in Beautiful) brings tears and decibels to Elton’s gospel-inspired music, with lyrics from Scissor Sisters’ Jake Shears. These include Right Kind Of Faith, as she steels herself to go on air; and there’s a triumphant lung-buster, Empty Hands, before the interval. Otherwise, Tammy is to televangelism what Sue Barker was to A Question Of Sport: sweet but dull.

The second half escalates the fashion atrocities, with sequins and Charles II wigs replacing the first half’s check jackets and geometric jumpers.

But Tammy’s status as a gay icon, achieved after the Pieters interview (in the show she hugs him, even though in real life they never met in person) is cheaply won. It’s not like she’s Peter Tatchell, risking imprisonment. 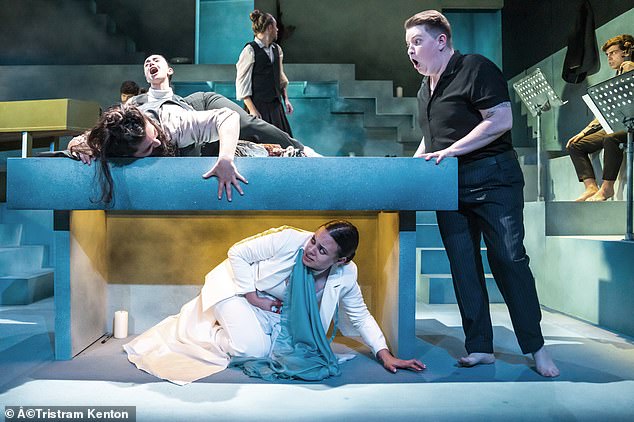 Tammy’s relationship with first husband Jim is sketched superficially, and there is no mention of husband number two (another felon, the church contractor Roe Messner). All of which makes it hard to sympathise with her emotional cri de coeur If You Came To See Me Cry.

Lynne Page’s choreography lays on an angular spectacle and the concluding number, See You In Heaven, is dance-floor ready. 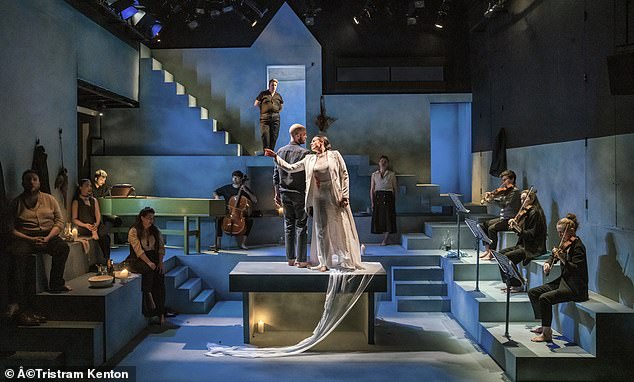 Patrick Marmion: New Zealand soprano Madison Nonoa, as Dido, is particularly tender in the heartrending aria, When I Am Laid In Earth, at the opera’s genuinely spiritual climax

The show has potential as a cult hit for the Elton John faithful. But to command Tammy’s mass appeal, it’ll need a bigger heart.

The story of how the Queen of Carthage fell for a wandering Trojan is set in a tomb by Isabelle Kettle’s stately production. There is some fairly hammy acting. But it weaves a sonic spell that Tammy cannot manage.

New Zealand soprano Madison Nonoa, as Dido, is particularly tender in the heartrending aria, When I Am Laid In Earth, at the opera’s genuinely spiritual climax.

Verdict: Lashings of fun but hits the wrong note

Bounding in for half-term with sensible shorts and scabby knees, Enid Blyton’s Famous Five have become a musical.

In a gorgeous Kirrin Island set of sky, sea and secret-tunnel trapdoors, Elinor Cook’s story is faithful in spirit but adjusted to modern sensibilities: pompous Julian, lively Dick and thoughtful Anne arrive to be resented by their tomboy cousin George (refusing to be Georgina: Blyton got there 70 years before transmania).

She’s a magnificent star turn by Maria Goodman, a defiant kid who is neglected by her scientist father, Quentin. 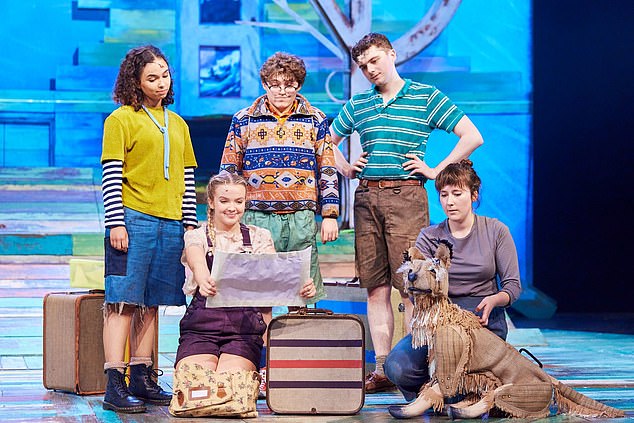 Bounding in for half-term with sensible shorts and scabby knees, Enid Blyton’s Famous Five have become a musical (pictured)

He is working secretly on synthesised algae to fuel the planet cleanly. But he bans her from keeping Timmy the Dog, brilliantly puppeteered from head to wagging tail. The cousins bond over saving him. Meanwhile, the villain Rowena — Kibong Tanji in a white power-suit — is being paid by Avarice Oil to stymie the research.

There’s a bivouac, a kidnap, a penknife rescue and a near-escape from dynamite (good old Timmy!) — as well as lashings of jam tarts and sandwiches.

Fun, frolicsome and directed with vigour by Tamara Harvey, it should be a treasure. The problem is the music: Theo Jamieson is an eminent arranger and musicals director, but his dense lyrics and reluctance to be tuneful tend to stifle the fun.

With less angst and better tunes, this could be fabulous. Morally impeccable, of course: by the end both villains are reconciled and working together to save the planet.

Verdict: The mother of all tragedies

There’s a moment in Shakespeare’s tragedy, Hamlet, when someone says the young prince was sent to England because he was mad — but if he doesn’t recover his wits, it wouldn’t matter because ‘there the men are as mad as he’.

In a week when the country seemed a more than usually crazy place, the laughter in the auditorium of Bristol’s Old Vic was particularly raucous.

Director John Haidar has shrunk a play about the rotten state of Denmark into a domestic drama of a family at war. 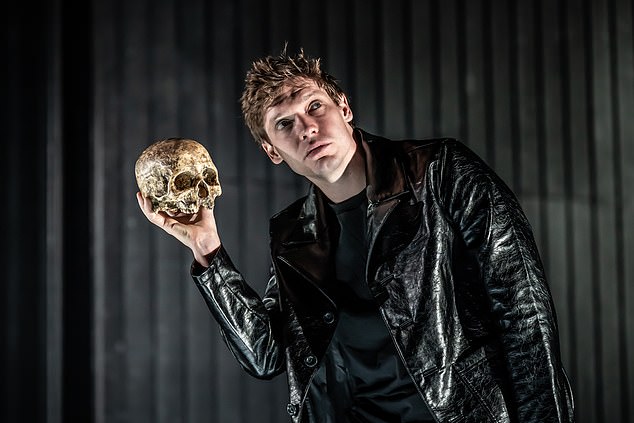 Billy Howe’s Hamlet is a young man failing to get a handle on things that have gone horribly awry.

He has returned from university following the death of his beloved father, only to find his mother, Gertrude, celebrating an indecently prompt marriage to Claudius, his father’s brother — and his girlfriend, Ophelia, dumping him.

The home he left was different. In his mind’s eye — a video projected behind him — he recalls a carefree innocence, as a little boy in the arms of doting parents. Was that for real? Or is his imagination playing tricks? And who can he trust if he can’t even trust himself? 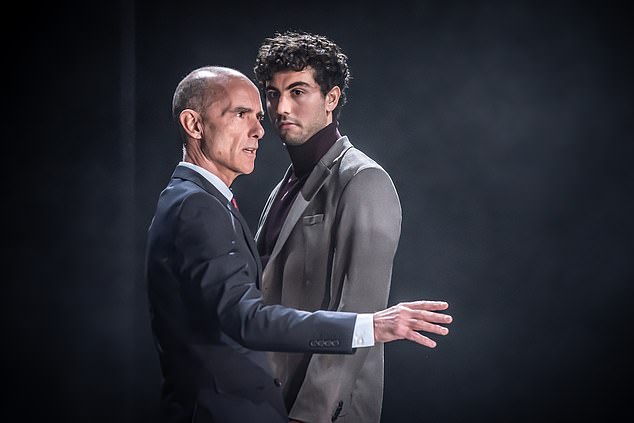 More than ever, the play’s focus is the broken relationships between parents and their adult children

Dressed in black, gushing tears of grief and betrayal, Howle cuts an isolated figure. He has tremendous energy, having decided ‘to be’ rather than not, but boyish sweetness has soured and he is hard to warm to. Which perhaps explains why Haidar’s clear, pacey account has you on the edge of your seat but fails to get under your skin.

Visually, it is striking. Natural light never enters this dark, oppressive castle of Elsinore: a Piranesi-like prison of shadowy corridors of power, haunted by the hooded ghost of Hamlet’s father.

More than ever, the play’s focus is the broken relationships between parents and their adult children. As Gertrude, Niamh Cusack’s careful calibration from perfect poise to self-disgusted despair is the performance that will linger.