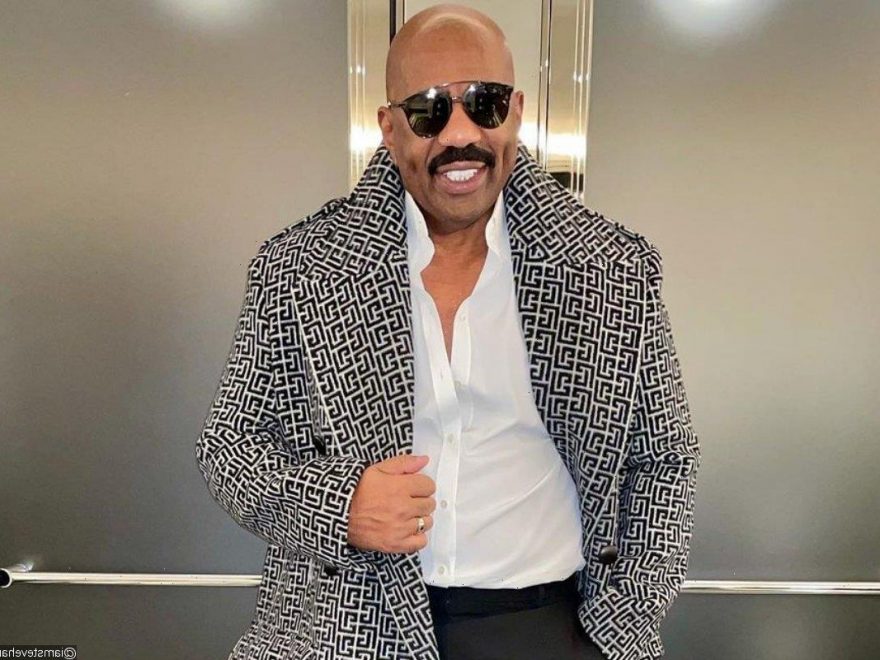 The ‘Family Feud’ host becomes a trending topic on Twitter as his photo, in which he flexes his style in a blue jacket and leather pants, sparks hilarious memes.

AceShowbiz –Steve Harvey has given the Internet at least one thing to get laughed at. Having documented his looks on Instagram lately, the television presenter has been trolled online after posting one of his latest stylish outfits.

In the photo which was posted on his Twitter account, the 64-year-old flexed his style in a bright blue suede Berluti jacket on top of a black turtleneck and a pair of black leather pants. Posing against what looks like closed doors, he put one hand inside his pants pocket while he also sported black shoes with white soles.

After he posted the picture, Steve became a trending topic on Twitter as people shared their hilarious takes on it. The photo sparked numerous memes, with some people comparing the “Family Feud” host in the blue jacket to Sonic the Hedgehog.

Getting creative, a number of Internet users edited Steve’s photo and added fake wigs among other things to turn him into cartoon characters. One person added a Captain America mask, jacket and shield to the picture. Another compared Steve to Mario Bros. character, while another put him among members of Korean boy group members Ateez.

While some found the memes amusing, some others disagreed with the trolls. The fans thought that Steve looked hot in that outfit. “Why they playing with Uncle Steve, his outfit is [fire emojis],” one person claimed.

Another praised his look, “His fit is actually fire.” Echoing the sentiment, one other commented, “I think the look was fire.” A fourth person commented, “Aye y’all can say wha y’all want bout uncle Steve he gettin to it lol.” Someone else jokingly compared him to Drake as writing, “He’s dope than drake.”

Steve did not mention where and on what occasion the photo was taken, but he and his wife Marjorie have been on a holiday trip to Paris in the last few days. On Wednesday, he posted a picture of him and his leading lady walking hand-in-hand while glamming up in all-black outfits.

In another post uploaded on Thursday, he shared several pictures of him wearing a stylish black-and-white coat with a white half-unbuttoned shirt and black pants. Expressing his confidence, he captioned the snaps, “Just do you baby.”